Spc. Lee Anne Truesdell of the 705th Transportation Company (POL), an Army Reserve unit from Ohio, tightens bolts on a tire at LSA Anaconda, Iraq. Maintenance has been a big reason for the company&#39;s success in Iraq. (Ron Jensen / S&S)

Spc. Lee Anne Truesdell of the 705th Transportation Company (POL), an Army Reserve unit from Ohio, tightens bolts on a tire at LSA Anaconda, Iraq. Maintenance has been a big reason for the company&#39;s success in Iraq. (Ron Jensen / S&S) 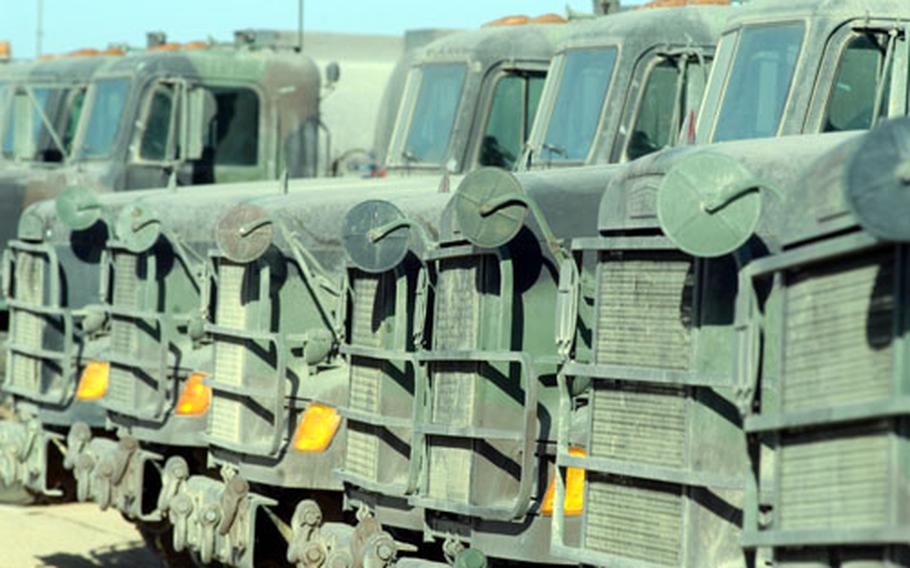 Trucks belonging to the 705th Transportation Company (POL), an Army Reserve unit from Ohio, rest in the motor pool at LSA Anaconda, Iraq. Despite driving nearly 1 million miles in Iraq, the trucks have had a high operational rate in the rough environment of Iraq. (Ron Jensen / S&S)

LSA ANACONDA, Iraq &#8212; In a country full of targets, perhaps none widens the eyes and gladdens the hearts of the bad boys in Iraq like those 30-foot trailers rolling down the open road carrying 7,500 gallons of fuel.

For anyone with a weapon and trouble on his mind, the trucks are an inviting sight. They are traveling bull&#8217;s-eyes. Moving placards proclaiming &#8220;Insert projectile here.&#8221;

The trucks have been shot at repeatedly and targeted by the improvised explosive devices that now have their own acronym &#8212; IEDs. But after nearly six months of driving the roads of Iraq, the unit based at LSA Anaconda, a logistics base north of Baghdad, has had no fatalities from the attacks and has lost only one of the 54 trailers it brought to Iraq.

In that time, the truckers have hauled 15.5 million gallons fuel across 930,000 miles of road.

Holben, a fiscal manager with the Ohio Department of Administrative Services, said the success rate is a result of several precautionary measures taken each day, when between 15 and 25 trucks might be ferrying fuel.

The speed does two things, he said.

First, it means the trucks are a harder target for rocket-propelled grenades or small arms fire. Second, it complicates the timing for the remote explosion of an IED.

Also, by claiming the center of the road and disregarding lane markers, the trucks are farther from the IEDs, which normally are placed at the side of the road. The spacing means a close call on one truck will not cause woes for the one behind.

There was no book detailing this. The ideas grew from experience and from a purposeful sharing of ideas by officers and enlisted personnel.

Holben said another secret to the company&#8217;s success is the maintenance. The 705th has an operational readiness rate of 85 percent, an amazingly high rate in the harsh environment of Iraq where heat and dust provide their own ambush of Holben&#8217;s rolling stock.

The heat and dust affect everything, from batteries to alternators, windshields to tires.

Within the company are only six people who are over-the-road truckers in real life. The rest are students, lawyers, factory workers and the like.

One even says, as a civilian, he is a bartender and actor.

Of that crowd, none were truckers when they mobilized in January, finally reaching Iraq in April. But now, they handle the big rigs with the ease of children playing with toys.

But compact cars are rarely targets here. And knowing you are likely to get shot at can be unnerving.

Drivers can expect to do at least two missions a week. Each one is at least 200 miles, and the main routes from LSA Anaconda take them through Baghdad and Fallujah, two of the most dangerous areas in a dangerous country.

The company provides its own security. Accompanying the trucks are Humvees and other vehicles carrying soldiers prepared to answer any threat.

&#8220;If we get hit, we return fire,&#8221; said Holben, who added that the standard procedure is to drive through any ambush or attack.

Sgt. 1st Class Clarence Washington, a welder in civilian life, said his job as driver is more dangerous now than it was in the Gulf War 12 years ago.

&#8220;An IED went off in the back of my truck and in front of the truck behind,&#8221; he said. The back window of his Freightliner cab was shattered in the blast, but he was unhurt.

But here is the dirty little secret that would astonish the ambushers and terrorists who lick their chops when they see the trailers coming into their midst and envision a successful hit that will leave a crater the size of New Jersey on the highway.

The JP-8 fuel in the trucks is unlikely to explode, even with a direct hit.

He said the high grade of fuel in the trucks is less volatile than most fuel. In fact, bullets have penetrated the thin metal trailers and done nothing but cause extra work in the motor pool.

But, Phipps said, the fumes left from the fuel is highly volatile. The company deals with that by leaving the hatch open on the return trip, allowing the vapors to escape and leaving nothing but air behind. That, too, is a lesson learned on the fly.

There are more miles ahead for the truckers of the 705th before they leave Iraq in five or six months. It may be too soon to make plans, but one driver has something already in mind for his return to the States.