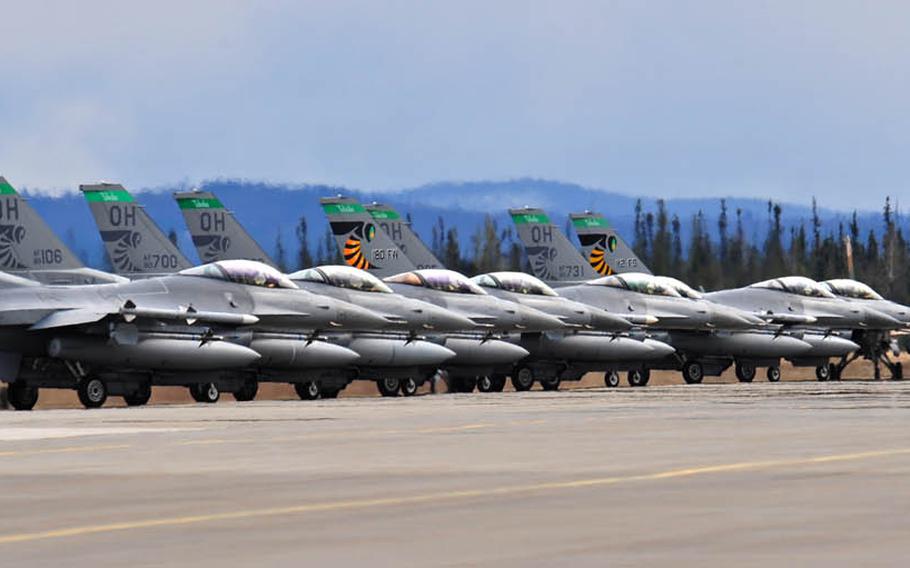 U.S. Air Force F-16 Fighting Falcons assigned to the 112th Fighter Squadron, Toledo Air National Guard Base, Ohio, wait on the flightline May 5, 2015, prior to take off during Red Flag-Alaska exercises at Eielson Air Force Base, Alaska. The squadron will deploy to Andersen Air Force Base this month to take over the theater security package mission from the 125th Expeditionary Fighter Squadron out of Kadena Air Base, Japan. (Miguel Lara/U.S. Air Force)

YOKOTA AIR BASE, Japan — More than 200 National Guardsmen from Ohio are heading to Guam this month to support a “theater security package” for U.S. Pacific Command.

The 112th Fighter Squadron from Toledo Air National Guard Base will deploy to Andersen Air Force Base — where it will be known as the 112th Expeditionary Fighter Squadron — to take over the theater security package mission from the 125th EFS out of Kadena Air Base, Japan, an Air Force statement said.

“The Air Force routinely deploys fighter aircraft to the region to provide PACOM and Pacific Air Forces with theater security packages, which help maintain a deterrent against threats to regional security and stability,” the statement said.

The 125th EFS will redeploy to Tulsa Air National Guard Base, Okla., but 12 of the squadron’s F-16 Fighting Falcons will move to Guam for the 112th EFS to operate.