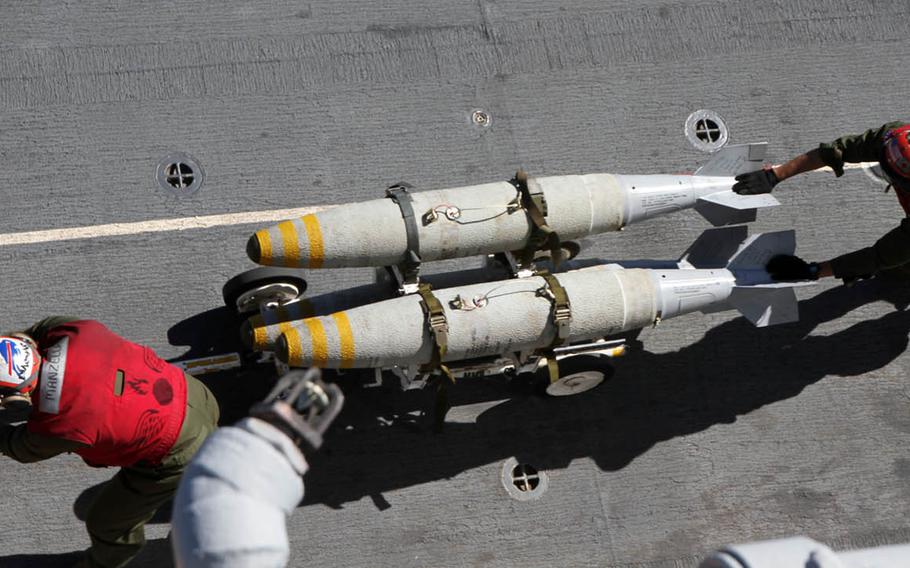 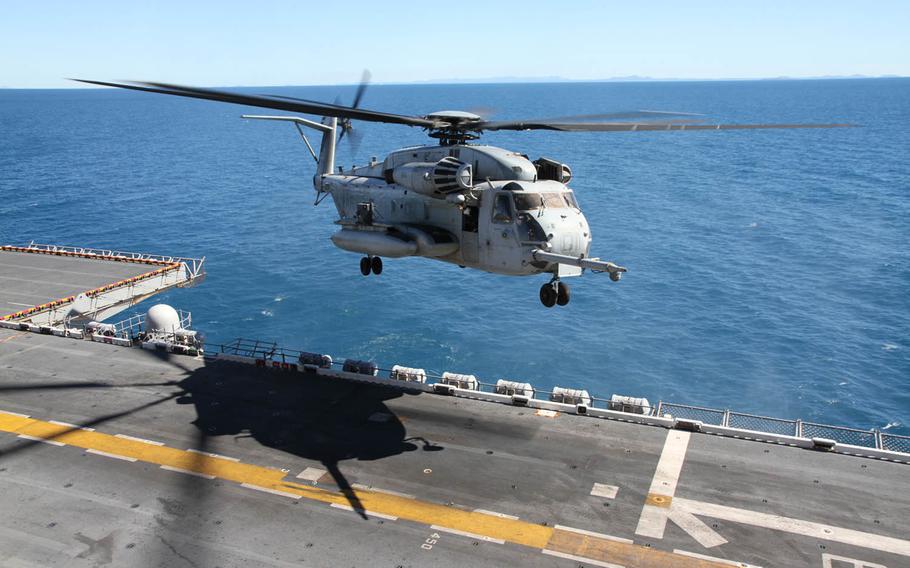 A Marine Corps CH-53E Super Stallion comes in for a landing aboard the flight deck of the amphibious assault ship USS Bonhomme Richard somewhere in the Coral Sea, July 20, 2017. (Matthew M. Burke/Stars and Stripes) 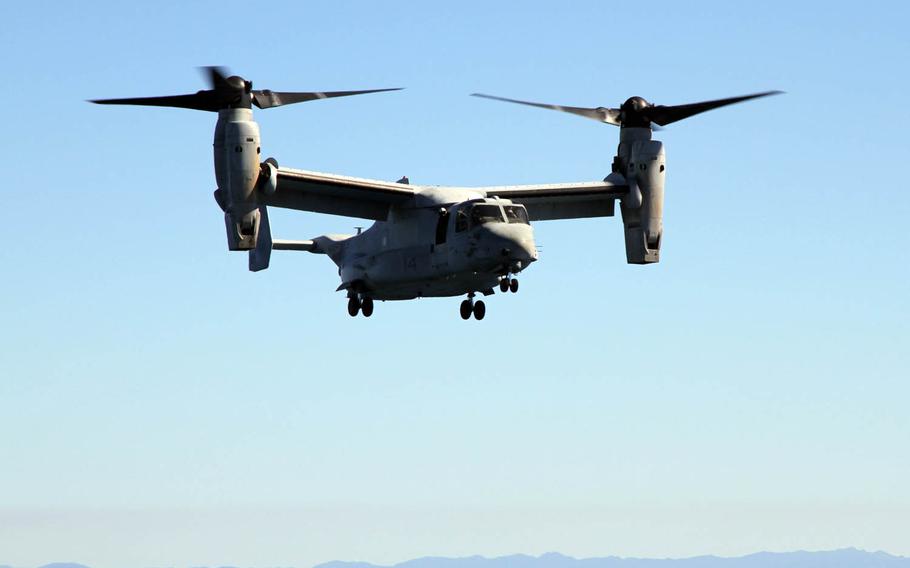 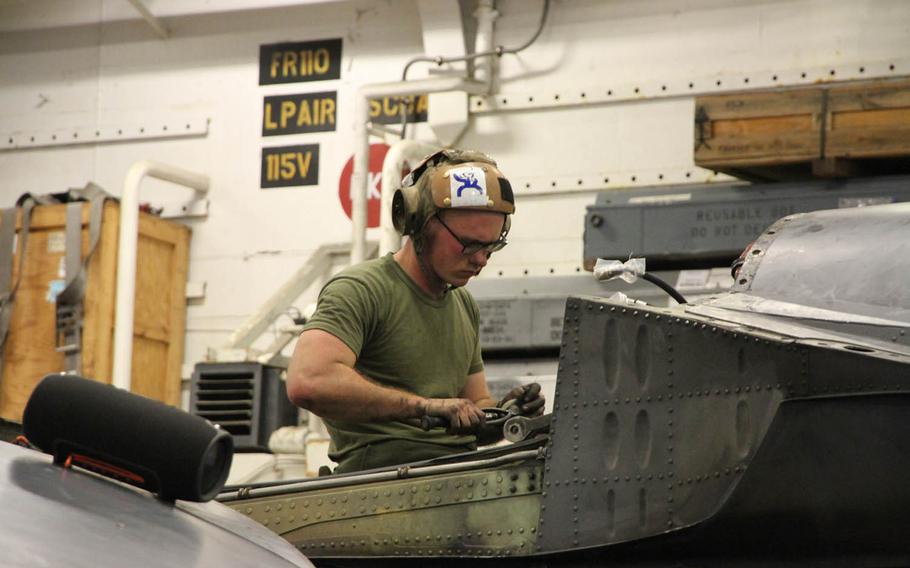 A Marine mechanic repairs an AV-8B Harrier in the hangar bay of the Wasp-class amphibious assault ship USS Bonhomme Richard during the waning days of Talisman Saber in Australia, July 20, 2017. (Matthew M. Burke/Stars and Stripes) 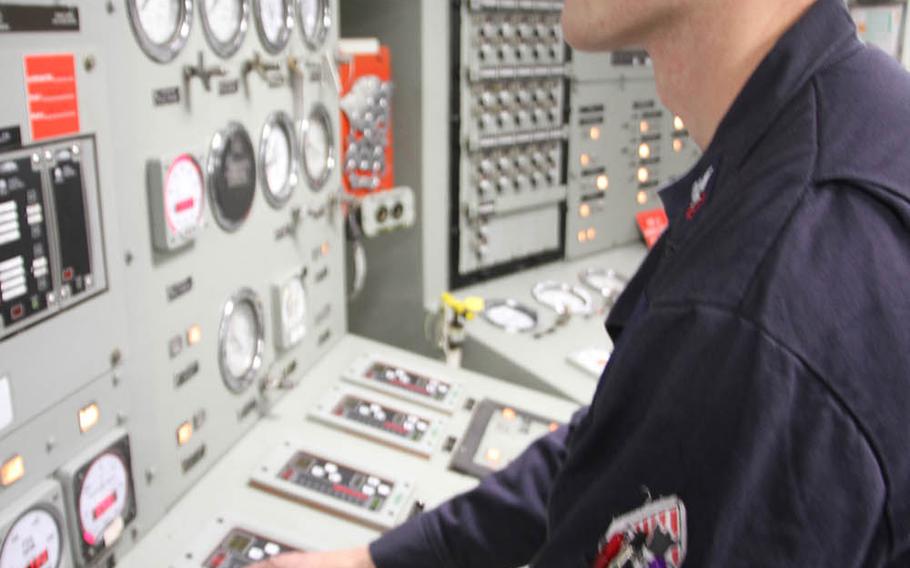 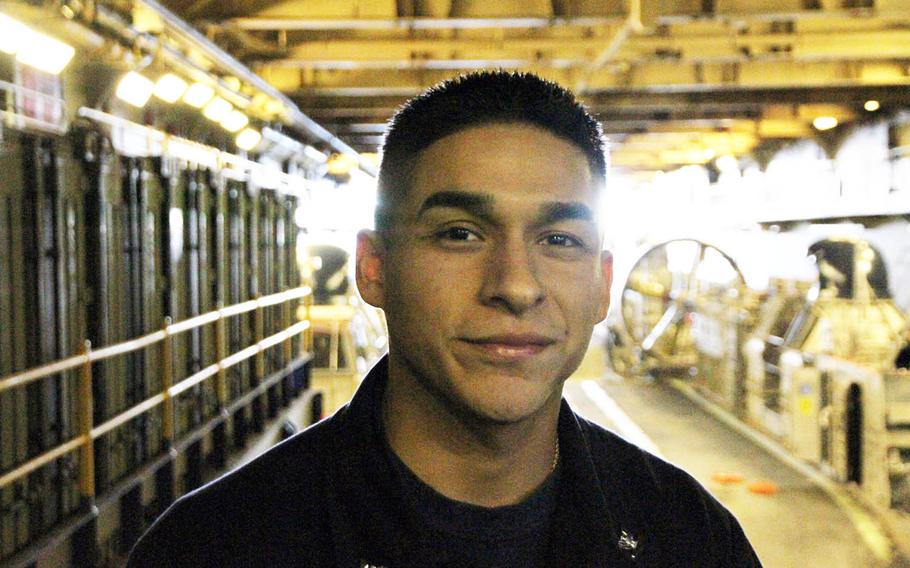 Petty Officer 3rd Class Esfrain Adame of the USS Bonhomme Richard's deck department was among those who worked around the clock to ensure that the two major amphibious assaults launched by the 31st Marines Expeditionary Unit during Talisman Saber 2017 went off without a hitch. (Matthew M. Burke/Stars and Stripes)

ABOARD USS BONHOMME RICHARD, Coral Sea — The sailors of the USS Bonhomme Richard remained in the thick of the action during massive, monthlong Talisman Saber drills that wrap up Tuesday off the Australian coast.

As part of the 11-ship Talisman Saber Expeditionary Strike Group, the Wasp-class amphibious assault vessel was involved in everything from launching Marines for amphibious assaults to handling landing and support aircraft like MV-22 Ospreys and AV-8B Harriers.

But for sailors like Petty Officer 2nd Class Mason Housley, the days spent serving the exercise were just like any other time at sea. He is among the many unheralded servicemembers who perform jobs integral to making exercises like Talisman Saber successful, yet are often unseen and unheard.

In fact, the 22-year-old machinist mate from Cincinnati, Ohio, said he didn’t see an Australian servicemember until nearly a month into the exercise.

“Our day to day is the same [whether in or out of the exercise],” Housley told Stars and Stripes last week from a small air-conditioned room deep within the Bonhomme Richard that’s filled with control panels and gauges. “You know, we come down, we stand our watch and we just support the ship.”

From the machine room, Housley and his shipmates control the Bonhomme Richard’s electricity and potable water supply, along with its propulsion.

“The bridge says we have to go this fast for whatever reason and we push the ship through the water,” he said. “There’s no one else that can do [this job] on the boat. I love my job. I don’t think I’d be happy anywhere else.”

Talisman Saber kicked off its seventh iteration aboard the Bonhomme Richard as it approached Sydney Harbor on June 29. After that, the U.S., Australian and New Zealand navies engaged in a variety of operations as the coalition attacked a well-entrenched, land-based enemy force with the modern capabilities of regional players like Russia and China.

The goal of Talisman Saber was to “increase proficiency operating in a multi-threat environment,” an Amphibious Force 7th Fleet statement said.

There were others aboard the Bonhomme Richard — and on other ships like the USS Green Bay, HMAS Success, USS Sterett, HMAS Canberra III and the HMAS Choules — who did not carry a rifle or have their faces covered in camouflage, yet whose contributions were just as important to victory in the exercise.

“Our job is initially to load these [landing craft air cushions] with our equipment right here, from the Humvees to the trucks to any of this ammo,” said Petty Officer 3rd Class Esfrain Adame, who works in the Bonhomme Richard’s deck department. “We load ‘em up, get alongside, then kick ‘em out to go along the shore so the Marine Corps can do whatever they need to do and raid the beach.”

The 23-year-old from Reading, Pa., said participants focused on honing their skills in the real-world environment of the high-tempo exercise.

“These LCACs don’t just go out on their own, right?” Adame said. “It’s my job to signal them out and bring them in.”

Adame and his fellow deck department sailors woke up at 4:30 a.m. on the morning of the 31st Marine Expeditionary Unit’s amphibious landing. They swept the well-deck for even the smallest of debris that could impact a landing craft and hamper the assault.

“We want to make sure everything is safe, nothing is loose,” he said.

About an hour later, they set Condition 1 Alpha, which meant well-deck operations would commence shortly. Next, they were given a time when the LCACs needed to be “kicked out” of the ship.

Adame and his colleagues worked to meet that deadline, loading them up, strapping things down and making sure the Marines were loaded and ready.

Three LCACs from Naval Beach Unit 7 out of Sasebo, Japan, were released at 5-minute intervals about an hour or so into last week’s assault. It took about 20 minutes for them to reach the beach, deploy their payload of vehicles and Marines and then return to the Bonhomme Richard for the next wave. Ten minutes later, they were loaded up again and headed back out.

“Everything we do is back to back,” Adame said. “There’s no breaks whatsoever. We start very early in the morning and end around [4:30 p.m.] in the afternoon.”

Adame said members of the deck department take a lot of pride in their work, even though they don’t often get a lot of accolades.

“We love what we do,” he said. “It’s something we’re privileged to do as well. Not every ship has the capabilities to do what we do.”