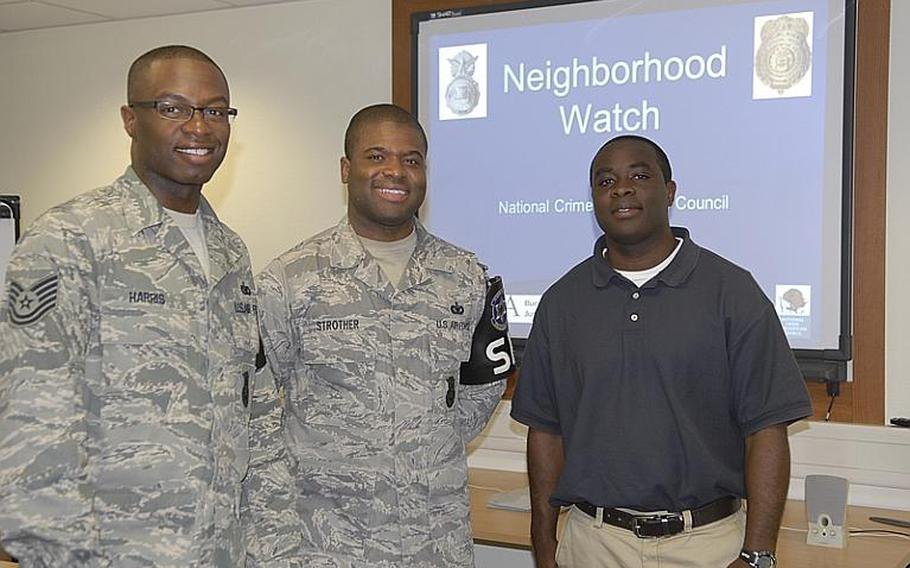 Tech. Sgts. Anthony Harris and Corey Strother of the 569th U.S. Forces Police Squadron, and Martez Blair, an Air Force Office of Special Investigations investigator, were prepared to take Vogelweh and Landstuhl base housing residents through the steps of establishing an on-base Neighborhood Watch program but nobody showed up for the Tuesday night meeting. Two more meetings were planned at Kapaun Air Station and Ramstein Air Base for Wednesday and Thursday evenings. Base residents had requested such a program in the wake of recent reported child molestations on Kaiserslautern-area bases. ()

&ldquo;I&rsquo;m hoping that people don&rsquo;t lose their energy for this,&rdquo; said Tech. Sgt. Anthony Harris, as he surveyed an empty conference room Tuesday evening where base residents had been invited to learn about setting up a Neighborhood Watch program.

Harris, noncommissioned-officer-in-charge of operations for the 569th U.S. Forces Police Squadron at Vogelweh, advised parents to stay on high alert, &ldquo;especially through the summer months.&rdquo;

Harris and his law enforcement counterparts said they were disappointed by the lack of attendance at Tuesday&rsquo;s meeting for Vogelweh and Landstuhl base housing residents. No one showed up for a similar meeting Tuesday on Ramstein Air Base, either. Three such meetings were scheduled at each base this week, with the final meetings Thursday at 5 p.m. on Kapaun Air Station in Building 2787 for Vogelweh and Landstuhl residents, and at the Hercules Theater for Ramstein residents.

&ldquo;In the wake of all the incidents, we thought people would be interested,&rdquo; Harris said. &ldquo;Either way, we&rsquo;re ready&rdquo; to help, he said.

Parents had asked base leaders about standing up a Neighborhood Watch at a Vogelweh town hall meeting held in early May where authorities informed residents of the three incidents involving children on base.

Since August, there have been two reports of child molestation and one report of attempted child abduction at Kaiserslautern-area military bases. The first case was not reported until January, and the most recent was reported in April. The victims have all been young girls, base officials said.

No further incidents have been reported, base officials said Tuesday, but law enforcement officials believe it&rsquo;s only a matter of time.

&ldquo;Criminals are only as faithful as their opportunities,&rdquo; said Tech. Sgt. Corey Strother, of the 569th U.S. Forces Police Squadron operations staff. &ldquo;If he feels he has an opportunity, he may try it again.&rdquo;

Harris, Strother and Martez Blair, an OSI investigator with the 13th Field Investigative Squadron at Ramstein, said a Neighborhood Watch could help deter the suspect and might help lead to his capture, if base residents are more vigilant in reporting suspicious activity.

In a Neighborhood Watch program, individuals volunteer to be &ldquo;block leaders,&rdquo; acting as the conduit between law enforcement and their neighbors, relaying information from residents to security forces and vice versa, Harris said.

&ldquo;Regardless if it&rsquo;s a sexual predator, or an individual who is always speeding, it&rsquo;s to try and build a foundation of getting people together to talk and bring information to security forces,&rdquo; Harris said.

&ldquo;This is not a security forces, OSI-led program,&rdquo; Blair said of Neighborhood Watch. &ldquo;We really want the people of the community to run this program.&rdquo;

Investigators have only a generic description of a suspect, provided by one of the victims: a white male in his mid-20s with blue eyes and brown hair in a military-style cut, wearing Army camouflage pants, a tan-and-green T-shirt and tan combat boots.

One of the exercises planned for the Neighborhood Watch meetings was intended to help people hone their observational skills.

&ldquo;People give me &lsquo;it was a four-door sedan, two males,&rsquo; but they forget to get the license plate,&rdquo; Blair said. &ldquo;I could do wonders with the license plate.&rdquo;

Details are important, Harris said: &ldquo;Is there a tattoo? A scar? Do they walk with a limp? Do they have a lisp, an accent?&rdquo;