Officials try to find out if boy, 11, is suicide bomber 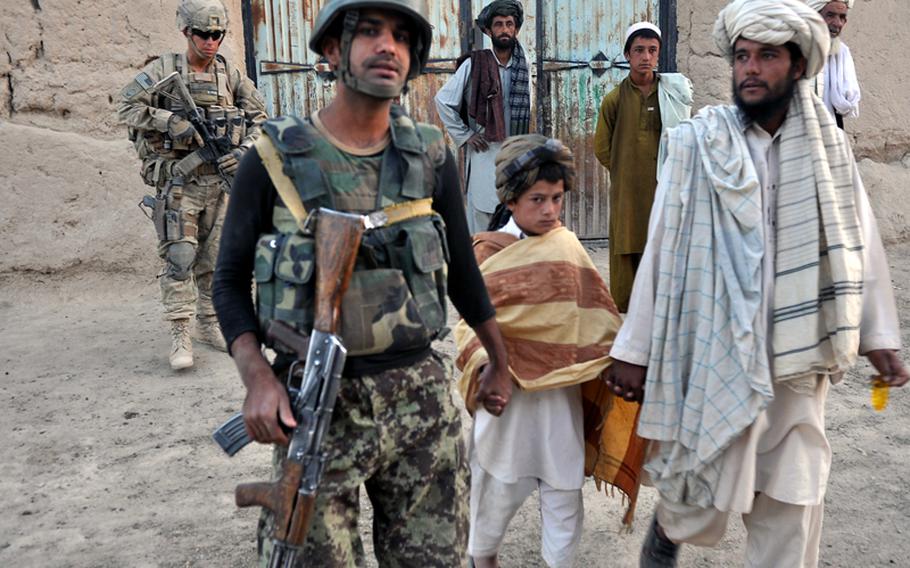 Hamid Gul is led away from the home where he was staying in the village of Hasan in Ghazni province by a man claiming to be his uncle, right, and an Afghan soldier. The boy was detained on suspicion of being a suicide bomber. (Martin Kuz/Stars and Stripes)

Hamid Gul is led away from the home where he was staying in the village of Hasan in Ghazni province by a man claiming to be his uncle, right, and an Afghan soldier. The boy was detained on suspicion of being a suicide bomber. (Martin Kuz/Stars and Stripes) An Afghan captain questions Hamid Gul, left, after the boy was detained on suspicion of being a suicide bomber in southern Ghazni province. A man claiming to be the uncle of Gul sat to his left while U.S. soldiers with the 1st Battalion, 504th Parachute Infantry Regiment listened to the interrogation. (Martin Kuz/Stars and Stripes) 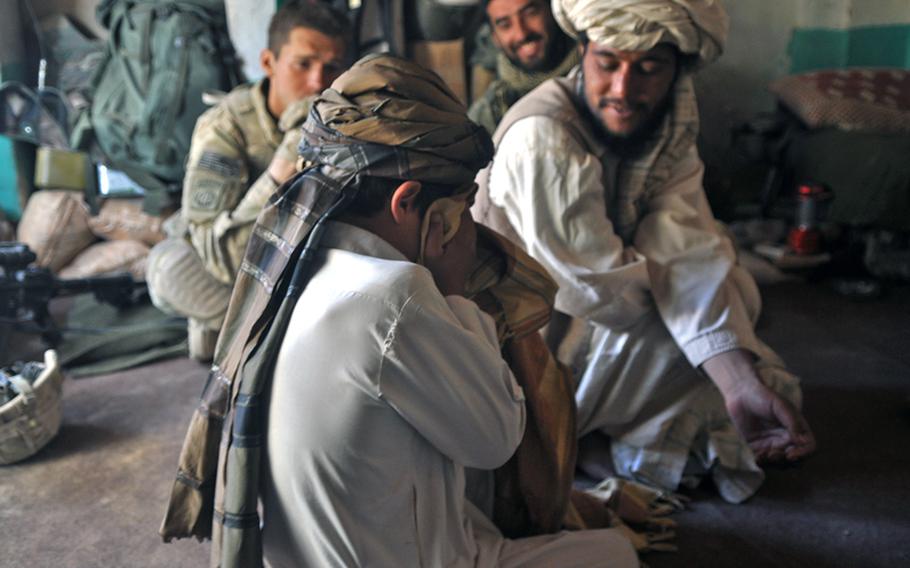 Hamid Gul, an 11-year-old suspected suicide bomber, breaks down during an interrogation after he was detained by Afghan soldiers in the village of Hasan in Ghazni province. (Martin Kuz/Stars and Stripes)

HASAN, Afghanistan &mdash; The suspect thwarted his Afghan and U.S. interrogators with vague replies for a half-hour, his voice soft and melodic, his brown eyes wide and guileless.

Finally, their patience ran out. The Afghan captain asking most of the questions stared at Hamid Gul, who sat cross-legged on the floor, the tail of a brown-and-gray turban spilling down his back.

&ldquo;If you do not tell us who sent you to our village,&rdquo; he said, &ldquo;we will not let you go home.&rdquo;

Gul&rsquo;s cheeks began to ripple like the surface of a lake in a breeze. He snatched a wool poncho off his lap and covered his face. His crying had the pitch of a nestling&rsquo;s squeak.

He may or may not have intended to carry out a suicide attack. Less ambiguous is that he is 11 years old.------

Afghan soldiers detained Gul on a recent morning in Hasan, a farming village in southern Ghazni province. Violence has spiked in the region as U.S.-led NATO forces attempt to suffocate the Taliban before handing over security in Ghazni to the Afghan military this winter.

Residents alerted the soldiers that a &ldquo;new boy&rdquo; had arrived in Hasan a day earlier. Rumors swirled that he had brought a suicide vest and planned to attack the Afghan National Army outpost in the town.

Villagers noticed his turban &mdash; boys here rarely don the headdress except on ceremonial occasions &mdash; and that his white shalwar kameez looked new. Islamic burial tradition dictates the wrapping of a corpse in immaculate white cloth; suicide attackers have been known to wear the color in observance of the ritual when committing their final act.

The soldiers found Gul staying at a house less than a quarter-mile from their base.

After a brief search of the home failed to turn up a suicide vest, they escorted him and a man who identified himself as the boy&rsquo;s uncle to the outpost. Gul, appearing younger and smaller than his age, walked between the man and a soldier, each clasping one of his hands.

Hands folded in his lap, Gul showed precocious poise, his face impassive as he answered the captain while his uncle kept mostly silent.

The boy claimed he lived in a village more than 10 miles away and rode a bike to Hasan to visit his cousins. He denied he had ties to the Taliban or possessed a suicide vest.

The captain, speaking quietly and assuring Gul that he was safe, pressed him to tell the truth. But even after breaking down, he repeated his story, regaining his composure within two or three minutes.

&ldquo;I am here to be with my cousins,&rdquo; Gul said. &ldquo;I am only here to see them.&rdquo;

As the loop of questions and unrevealing answers continued, Corrales walked out of the room. I asked him later why he left early.

&ldquo;Maybe it&rsquo;s because I have three kids myself,&rdquo; he said, &ldquo;but it&rsquo;s hard seeing a kid get questioned like that. But I understand why it has to be done.&rdquo;-------

Last December, in the Nishigam district of Kunar province bordering Pakistan, a 12-year-old boy wearing a suicide vest blew himself up outside a mosque, killing six people.

The victims included the district police chief and an Afghan intelligence officer. A militant Islamic group in Pakistan linked to the Taliban and al-Qaida claimed responsibility.

The boy had crossed the border into Afghanistan and arrived in Nishigam possibly as much as a week earlier. An unknown villager provided him sanctuary before the attack.

I met with the acting police chief, Abdul Latif, five days after that blast. &ldquo;The insurgents tell the children they are making jihad, and the children believe them because they do not understand what is happening in Afghanistan,&rdquo; he said.

&ldquo;But this is not jihad. This is murder.&rdquo;

The Afghan captain who led the interrogation of Gul dispatched his uncle &mdash; a man the captain knew &mdash; to bring the boy&rsquo;s father to the outpost. A short time later, a soldier entered the room and handed Gul a few pieces of hard candy.

For the first time that morning, the boy smiled. It remained unclear whether he had come to Hasan to kill. It was evident he was too young to know better.