A Royal Air Force World War II bomb containing 1,800 kg of explosives was found in the area of the former "Dal Molin" airport in Vicenza, Italy, adjacent to Caserma Renato Del Din, an Italian army installation in use by the U.S. Army. (Paolo Bovo/U.S. Army)

A Royal Air Force World War II bomb containing 1,800 kg of explosives was found in the area of the former "Dal Molin" airport in Vicenza, Italy, adjacent to Caserma Renato Del Din, an Italian army installation in use by the U.S. Army. (Paolo Bovo/U.S. Army) 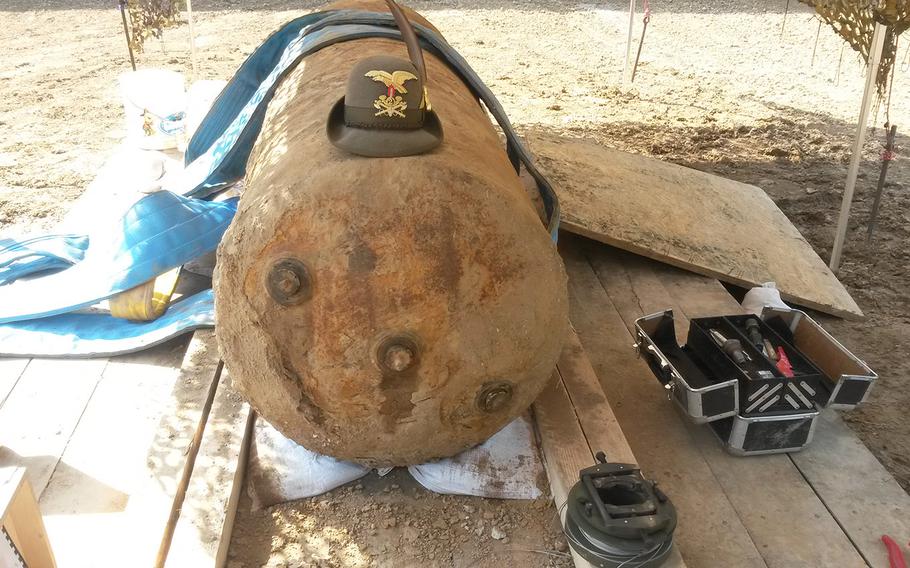 A 4,000-pound British blockbuster bomb dropped 70 years ago in Vicenza, Italy, was successfully disarmed on April 25 2014 by two Italian combat engineers. The bomb disposal effort caused the city to evacuate some 30,000 Vicenza residents and the U.S. Army Base, Del Din, for the duration. (Courtesy of the Italian army) The World War II-era British "Blockbuster" bomb that was uncovered in Vicenza, Italy, is hauled away to a nearby cave after being disarmed on April 25, 2014. The bomb disposal effort caused the city to evacuate some 30,000 Vicenza residents and the U.S. Army Base Del Din for the duration. (Courtesy of the Italian army) 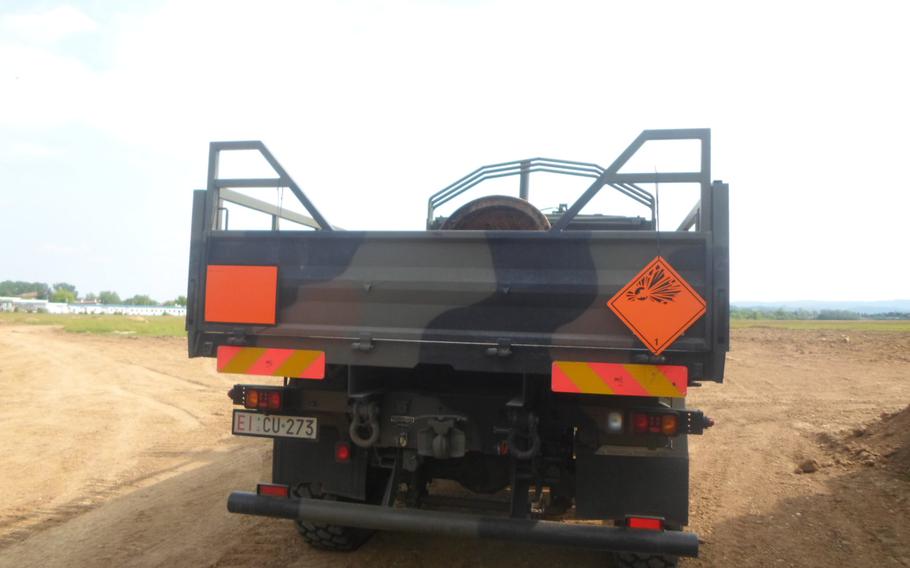 The World War II-era British "Blockbuster" bomb that was uncovered in Vicenza, Italy, is hauled away to a nearby cave after being disarmed on April 25, 2014. (Courtesy of the Italian army)

VICENZA, Italy — Operation Old Lady, as the Italians called it, was a success. The removal of a British “Blockbuster” bomb dropped 70 years ago, whose disposal resulted in the evacuation of 30,000 residents and an entire U.S. Army base, was disarmed with no harm done to anyone.

Demolition experts with the 2nd Regiment of the Julia Alpine Engineers reported in from the site at about 1:30 p.m. Friday that they had removed the bomb’s detonators after first removing its three fuses.

Italian army officers, local politicians, police, firefighters, medical personnel and scores of news reporters, gathered at a command center about 4.5 miles from the site, applauded at the news.

“The bomb now is very calm. The ‘Old Lady’ can stay in a very quiet way,” said Italian Lt. Col. Mauro Altieri, referring to the nickname given to the bomb by the Italians “out of respect,” they said.

In fact, “Bomb Day,” the operation to remove, disarm and haul away the 4,000-pound bomb and evacuation plans, had been in planning for months, ever since the bomb was found in October by an explosives survey team.

It is by far the biggest of 133 bombs found by experts in the area near the city’s former airport, which was controlled by Axis forces during World War II.

The field where the device lay is to be developed as a “peace park,” officials say, to placate Vicenza citizens who opposed the creation of the new U.S. Army base, Del Din. The base is adjacent to the site.

Soldiers on Del Din and 30,000 residents within three kilometers (about 1.8 miles) of the site were evacuated Friday morning in case something went wrong — in case giant blast walls made of soil and Hesco barriers enclosing the bomb didn’t work as planned.

The engineers — two sergeants and a captain — started work at about 10 a.m. with the announcement that all had evacuated. Removing the fuses was reportedly the most delicate part. Unit commander Col. Gianni Fioretto said it took about 20 minutes to remove each fuse.

“Their concentration is very strong. I’m very proud of my soldiers,” Fioretto said at the command center while the engineers worked on.

After the fuses were removed, the engineers sent photos, for the archives, and also for the news media.

The crusty bomb wore the feathered Alpine hat of the soldiers’ unit. Alpine troops are famed for, among other things, fierce mountain fighting in World War I. “We love our hat,” Fioretto said.

His engineers were deployed for six months last year to western Afghanistan as part of Task Force Saw, along with a U.S. engineer unit, Fioretto said.

But the 4,000-pound bomb was the largest the group had ever encountered.

Work stopped at about 11:30 a.m. when a resident of the evacuated sector was found to be still at home.

“There will be an investigation to understand how it was possible to be in the area,” Fioretto said.

“Maybe the Germans, if you tell them to leave the area, do it,” Fioretto said. “Italians — we are more flexible.”

Shortly after that, another person and a vehicle also turned up in the area, and seemingly tense Vicenza civilian officials, responsible for the evacuation, met behind closed doors.

Although the possibility of an explosion ended when the detonators were removed, experts said the engineers still had more work to do.

First, the explosives inside the bomb were to be hit with a mixture of chemicals and water heated to no more than 158 degrees Fahrenheit.

Later, soldiers were to transport what remained of the bomb to a nearby cave where old bombs are routinely brought and destroyed.

Italy was bombed extensively by the Allies in World War II. After the country deposed fascist leader Benito Mussolini and switched to the Allied side in 1943, it was bombed even more.

“Since German forces were in occupation, northern and central Italy remained a target for allied bombing until the very last days of the war,” British historian Richard Overy writes in his book, “The Bombers and the Bombed: Allied Air War Over Europe 1940-1945.”