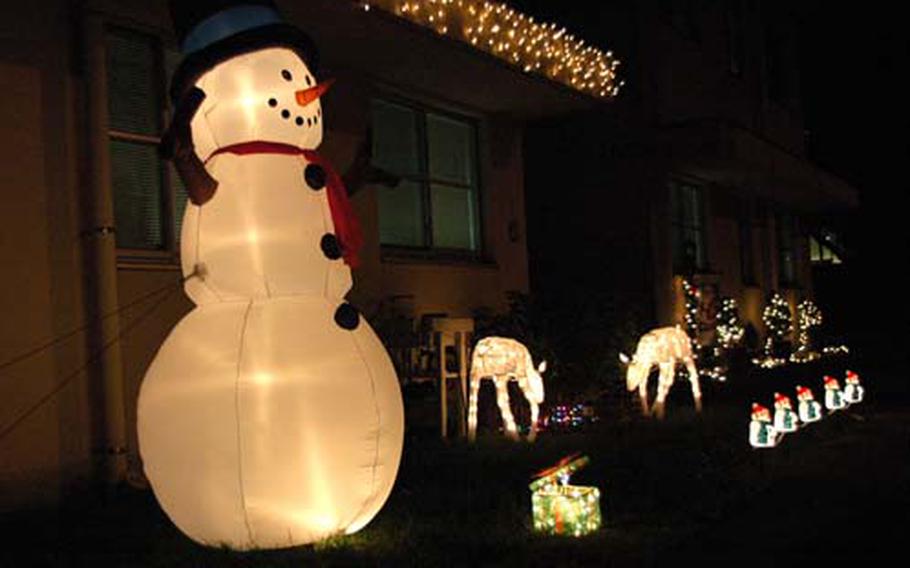 CAMP KINSER, Okinawa &#8212; A little planning and common sense will keep the season jolly as you deck the halls with boughs of holly, military safety officials here said.

Too often when decorating, people take shortcuts rather than stop to get whatever item is needed to safely complete the project, said Aaron M. Davis, Camp Kinser&#8217;s lead safety and occupational health specialist.

Wires should be checked periodically and should not be warm to the touch, she said.

And using indoor lights and extension cords outside is dangerous, because they are not made to withstand the elements, Davis stressed.

People shouldn&#8217;t use more than three strings of lights to an extension cord unless the manufacturer&#8217;s instructions say the cord is designed for more, Davis and Bellamy said.

And lights should never be left unattended, they said.

"If you leave the house or go to sleep, turn them off," Davis urged.

Some people just need the smell of a freshly cut tree to really feel the Christmas spirit, officials said, but when shopping for a tree, look for the freshest one.

And water the tree daily, because a dry tree is a fire hazard, Davis said.

A safety video shown to Camp Butler personnel demonstrates how a dry Christmas tree can catch fire and engulf an entire room in less than 30 seconds, he said.

As for artificial trees, make sure they are labeled as fire-retardant, Bellamy said, and place them at least three feet from heat sources.

The tree also should be near an outlet, so cords are not strung across walkways.

Once the tree is loaded with sparkly decorations, those decorations could attract the attention of pets and children. So to keep Fido away, Davis advised, "make sure you don&#8217;t have things hanging down on the bottom branches."

Some religious practices involve lighting candles &#8212; such as a Menorah during the Jewish holiday Hanukkah.

When using candles, ensure candleholders are sturdy, made of nonflammable material and won&#8217;t easily tip over, Bellamy said.

Don&#8217;t put the candles in areas where they can be blown over or knocked down, and don&#8217;t ever place them in windows where they might ignite blinds or curtains, she added.

Food is a big part of the holiday season, too, but all that cooking can lead to some problems.

Firefighters have responded to more cooking fires during the holidays than during the rest of the year, Davis said.

They&#8217;re usually "small ones with moderate damage," but even small ones will dampen Christmas spirits, he said.

Davis said the key is not cooking everything at once.

"With four or five burners going and grease popping, there&#8217;s too many things going on at once and you can&#8217;t control it," he explained.

Davis also gave some tips on deep-frying a turkey.

The cook can measure out how much oil is needed by using water first and seeing how much space the turkey displaces, Davis suggested.

And the turkey must be completely defrosted &#8212; otherwise, melting ice will "hit the oil, causing it to pop everywhere," he said.

The key to making it a safe holiday season, Davis said, is doing everything "in moderation."

Marine Corps Base Camp Butler and Kadena Air Base residents can have lighted decorations on from sunset to 10 p.m. Exterior decorations should be removed by Jan. 3.Japan

Yokota Air Base residents can have holiday lights, inflatable yard decorations and other electric displays turned on from sunset to midnight. Decorations must be taken down by Jan. 5.Camp Zama residents can have displays on between sunset and 10 p.m. &#8212; except for Dec. 24-25, when lights may remain on until midnight. Displays should be removed shortly after New Year&#8217;s Day.Marine Corps Air Station Iwakuni residents must have decorations turned off by 11 p.m. Sundays through Thursdays and by midnight Fridays and Saturdays. Residents can leave lights on overnight Dec. 24 and Dec. 31. Displays will not be allowed after Jan. 2.Residents on Commander, Naval Forces Japan installations can power displays from dusk to 10 p.m. Decorations must be removed by Jan. 15.South Korea