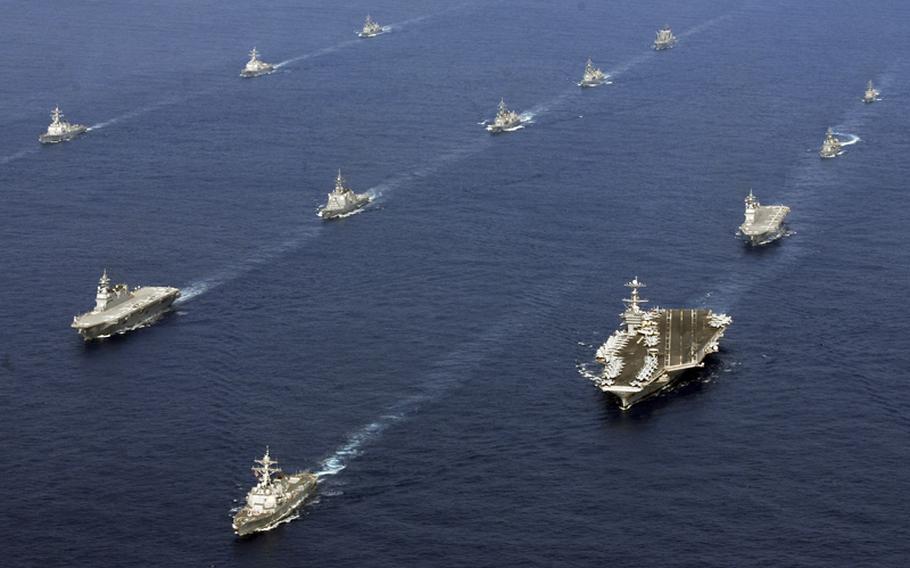 Twenty-six ships from the U.S. Navy and the Japan Maritime Self-Defense Force steam together in the East China Sea on Nov. 16, 2012, after the conclusion of Keen Sword, a biennial naval exercise by the two countries to respond to a crisis in the Asia-Pacific region. (Jennifer A. Villalovos/U.S. Navy)

Twenty-six ships from the U.S. Navy and the Japan Maritime Self-Defense Force steam together in the East China Sea on Nov. 16, 2012, after the conclusion of Keen Sword, a biennial naval exercise by the two countries to respond to a crisis in the Asia-Pacific region. (Jennifer A. Villalovos/U.S. Navy) 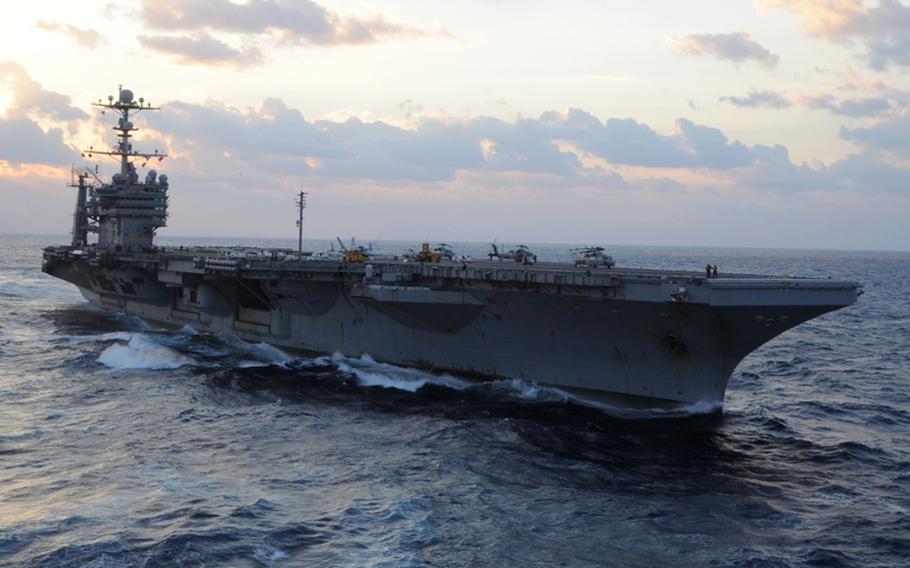 WASHINGTON — Members of Congress and senior defense officials see problems in the Obama administration’s ongoing rebalance of military forces toward the Asia-Pacific.

“I welcome the focus on the Asia-Pacific. However, time will tell whether words and promises are followed by action,” House Armed Services Committee chairman Rep. Buck McKeon said during a Congressional hearing Tuesday. “When the president framed rebalance, he discussed how we could now safely turn our attention to Asia because the war in Afghanistan was receding and al-Qaida was on the path to defeat. I’m concerned these conditions haven’t panned out.”

“Violence and instability rage in the Middle East and Africa. Preserving forces’ readiness and capabilities in PACOM means less elsewhere. Can we afford to take risk in CENTCOM or AFRICOM?” he said. “Budget cuts only exacerbate the problem … As we look forward, defense funding is basically flat out into the future. We’re back to sequestration levels. And military leaders are left with no choice but to cut end strength, readiness and capabilities. And that has consequences for our security and military commitments in PACOM and across the globe unless we adequately resource defense.”

“On the perspective of technological superiority, the Department of Defense is being challenged in ways that I have not seen for decades, particularly in the Asia-Pacific region,” Frank Kendall, the Under Secretary of Defense for Acquisition, Technology and Logistics, told lawmakers. “As we go through our budget cycles, we’re looking very carefully at Pacific Command’s requirements and what they need for the operations in that area, what potential future concerns [Adm. Samuel Locklear, commander of U.S. Pacific Command] might have, and we are prioritizing those investments. So we are responding, but … declining budgets alone make it more difficult for us to do that.”

Kendall said the budget situation could have a negative impact on the military balance between the U.S. and China, a major concern and a key impetus for the rebalance strategy.

“The trajectory for our relationship with China is uncertain today, where we’re going to go in the future. One of the reasons we’re focused on the Asia Pacific is we want to do our best to influence that trajectory to go in a positive way,” he said. “There is a range of things that deserve greater investment than we may be able to afford with the current levels.”

Michael Lumpkin, the Acting Under Secretary of Defense for Policy, said the speed of the rebalance may have to be slowed down due to turmoil in other regions, including the Middle East.

“The commitment to the Asia-Pacific rebalance is steadfast. However, I think what we will see as we have requirements in other theaters that our timing and the pace of the rebalance may be subject to adjustments as we move forward depending on what the rest of the world has,” he said.

Lumpkin said America’s Asian allies harbor doubts about whether the rebalance will go forward as planned.

“We’re two years into a kind of a multi-decade rebalance … We’re kind of in the early stages right now. So arguably, our partners and allies are waiting to see us come through. And I would also argue that they are probably hedging their bets somewhat just to make sure that they can, you know, have the ability to self-defend on their own,” he said.