Officials point to  other ways to dial  911 after outages 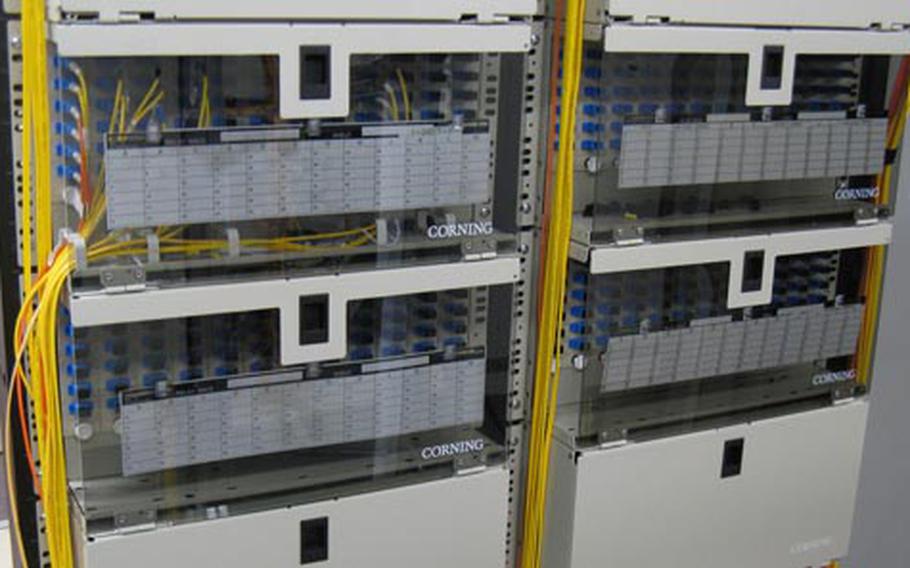 Data travels along the cables at Yokosuka Naval Base from the Base Communications Office and out to customers Friday. The office also manages phone lines on base, which have redundant systems to prevent failures. However, some recent outages have officials reminding residents that they can call emergency services using commercial numbers. (Erik Slavin / S&S)

For brief periods during the past few months, Negishi housing area residents were unable to dial 911 over their DSN land lines, though no one reported any catastrophes during those times.

Yokosuka fire and communications officials said Friday that if outages recur, residents who need 911 can call it as a commercial number over their land lines or, failing that, on a cell phone.

On Feb. 26, the interbase trunk connecting DSN lines at Negishi housing area to Atsugi Naval Air Facility &#8212; which is where Negishi&#8217;s 911 calls go &#8212; stopped working, according to Yokosuka Base Communications Office data.

Workers ensured that 911 came back up within minutes and calls within Negishi were not affected, said communications office manager Chris Mommaerts.

However, non-emergency calls between Negishi and other bases were inoperable for about four hours. Calls between separated bases are managed through the Defense Information Systems Agency.

On April 17, Negishi&#8217;s entire phone system crashed for about five minutes because of a new switch. The system returned to normal after being rebooted, Mommaerts said.

It&#8217;s extremely rare for all lines, DSN and commercial, to be down because of redundant systems in place, Mommaerts said.

Should a typhoon strike and kill all electricity, the phones would run on generators for days; beyond that, the phone system can be battery-powered for eight hours.

However, Mommaerts cautions that Voice over Internet Protocol phones won&#8217;t work without the electrical grid. Residents should have a land line as a backup in case of an emergency, he said.

Residents also can use cell phones to call the fire department on a commercial line should land lines go out during an emergency, regional fire chief Russell Tarver said Friday.

While cell phones are a good alternative, they shouldn&#8217;t be relied upon for an emergency without a backup, Mommaerts said.

If cell phone towers are knocked out during a natural disaster or electrical outage, a land line or radio may be necessary, he added.