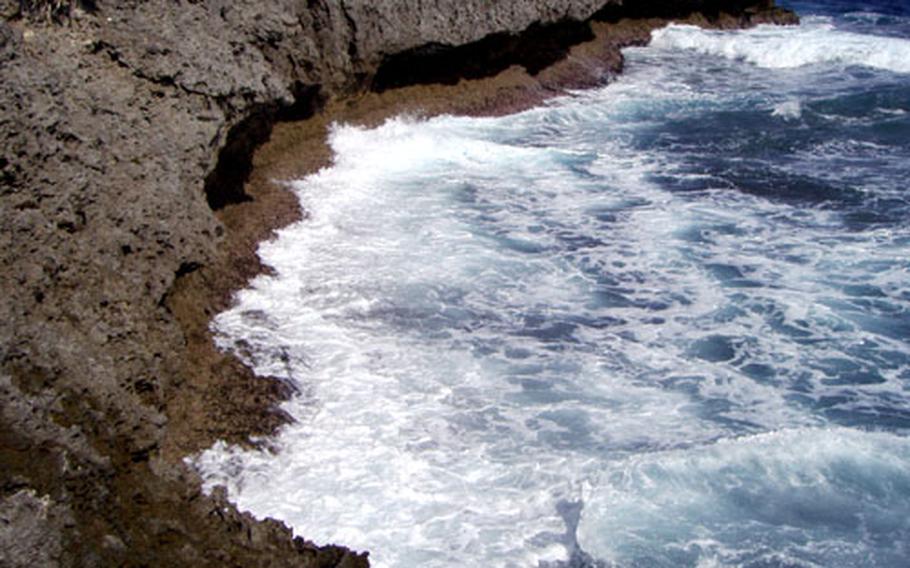 Maeda Point is considered by safety officials one of the seven most dangerous water spots on Okinawa. (Courtesy of Shawn Curtis)

In the past several months, however, there have been six close calls, according to Shawn Curtis, an occupational safety and health specialist here.

They all had &#8220;near-tragic results requiring either medical treatment or hospitalization,&#8221; Curtis said. &#8220;Our recent track record shows that we could be close to having another serious incident.&#8221;

With the weather warming and the ocean beckoning, the time to refocus on water safety is now, he and other water safety experts say.

With roughly 8,000 recreational scuba divers in the military community, Okinawa has the highest concentration of divers in the world, according to Bob Zimmerman, chief scuba instructor for Marine Corps Community Services.

&#8220;You can easily get to countless [dive] sites on island,&#8221; said Kevin Freeland, MCCS scuba program manager. &#8220;The quality and temperature of the water make [diving] the No. 1 recreational pastime for servicemembers.&#8221;

Freeland recommends refreshing skills by diving in either an easy, familiar spot or a swimming pool.

Zimmerman said the amount of time a diver has been inactive will dictate the skills needing renewal.

Both Zimmerman and Freeland said it&#8217;s important to get dive gear checked out to make sure it&#8217;s working properly before entering the water. All base scuba lockers can perform safety inspections.

When it&#8217;s time to hit the water, Freeland offers the following advice to divers unsure of conditions:

Many times, people enter questionable waters because they&#8217;ve made plans for the day and spent money on renting gear, Curtis said..

&#8220;Many incidents have happened where one diver was superior to the other,&#8221; and the less-experienced diver went beyond his capabilities, he said.

Conditions that could damage property or cause minor injury. Issued when winds reaching 18 knots (about 21 mph), including gusts, have been observed for six hours, or otherwise adverse sea conditions have been reported. Exercise caution if entering the water. Only people who can accurately assess local conditions should enter the water.

Conditions that may be life-threatening. Issued after 25-knot (about 29 mph) winds, including gusts, have been observed for at least three hours, or otherwise dangerous sea conditions have been observed. Exercise extreme caution if entering the water. Only people who can accurately assess local conditions, have extensive experience in water activity, have a need to enter the water, or whose water activity warrants the action should enter the water.

Conditions are deemed life-threatening and will cause damage to property. Issued after 34-knot (about 39 mph) winds, including gusts, have been observed and are persist for at least three hours, or during Tropical Cyclone Condition of Readiness (TCCOR) Caution, islandwide. No entry into the water is permitted. Marine SCUBA facilities close and/or will not issue rentals, refill tanks, or continue water-related classes or activities.

To find out the latest sea condition, go to the Kadena Weather Web site at: www.kadena.af.mil/weather/update/sea.htm, or monitor AFN television or radio. You can also contact the Torii Station scuba locker at 644-4263, Tsunami Gear on Camp Foster at 645-4206 or the Kadena Marine at 634-6344.

Know your abilities and stay within them.Never go into the water alone.Only swim where lifeguards are.Always enter the water feet first in unclear waters.Stay within an arm&#8217;s length of children in the water.Make informed decisions &#8212; check local weather forecasts and sea conditions.Don&#8217;t mix alcohol with water sports &#8212; 50 percent of stateside water-related fatalities are alcohol-related.In the event of a water emergency, people should call &#8220;118,&#8221; a direct line to the Japanese Coast Guard. They will ask local boats to assist and will notify base emergency personnel.Source: Marine Corps Bases Japan Safety Office