Officials: Nabi won’t be as bad as Katrina 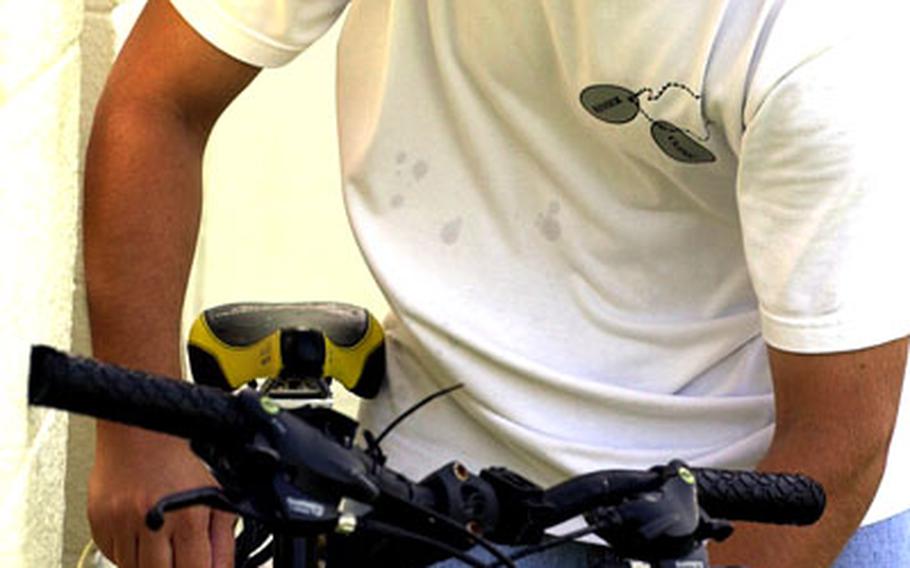 Navy Petty Officer 2nd Class Shawn Thackwray lashes a bicycle to a concrete wall on Saturday behind his duplex unit at the Futenma Housing Area, Camp Foster, Okinawa. Thackwray, 27, was preparing to batten down along with his wife, Kaori, and two children for Typhoon Nabi. (Dave Ornauer / S&S)

CAMP FOSTER, Okinawa &#8212; While winds of more than 90 mph and up to 15 inches of rain are forecast to hit Okinawa early this week, officials said Typhoon Nabi likely won&#8217;t turn into another Katrina.

Nabi&#8217;s course again shifted slightly overnight Friday, aiming toward Yoron, Erabu and Toku islands just north of Okinawa. Its track would take it 143 miles north of Kadena on Monday afternoon, with wind gusts of up to 92 mph expected at Kadena.

Two are on Kadena: the Mullen-Patterson intersection in the Seville Manor housing area and part of Peace Road near Kadena Marina. The other is in Camp Foster&#8217;s Kishaba housing area by Kubasaki High School.

Joint Typhoon Warning Center forecasts said the storm was packing wind gusts up to 184 mph at its center and causing maximum wave heights of 48 feet at midday Saturday.

Still, he warned, Nabi will be no cakewalk. He cautioned residents to stay indoors for up to two days and ensure loose objects are tied or bolted down or stored inside.

Noting that many people transferred to Okinawa just this summer, Gonzalez emphasized the need for caution, especially during elevated levels of tropical cyclone conditions of readiness.

Typhoon Nabi was downgraded from super-typhoon status but began dumping rain on Okinawa Saturday afternoon. It&#8217;s expected to pass over the southern edges of Amami island at noon Monday, with sustained winds of 127 mph and gusts up to 155, forecasts said Saturday night.

At 9 p.m. Saturday, Nabi was 405 miles southeast of Okinawa, rumbling north-northwest at 13 mph, packing sustained winds of 132 mph and gusts up to 161 at its center.

Once it departs the Okinawa area, Nabi is expected to turn its attention to the Korean peninsula, where it&#8217;s forecast to make landfall at 6 p.m. Wednesday over the southeastern coastal city of Busan, packing sustained winds of 109 mph and gusts up to 132.

No elevated TCCOR levels had yet been declared Saturday evening at Sasebo Naval Base on Japan&#8217;s main island. Forecasts indicated Nabi&#8217;s closest point of approach to Sasebo would be 53 miles west about 11 a.m. Wednesday.

Get updated forecasts and TCCR updates