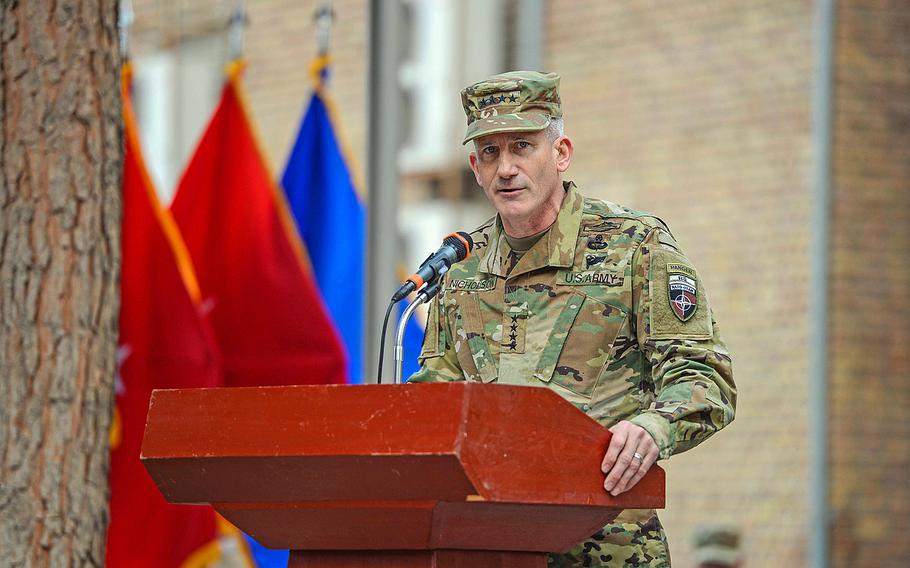 KABUL, Afghanistan — Officials in eastern Afghanistan Wednesday welcomed news that their region would become a focus of new U.S. efforts to target the Taliban.

“The (counterterrorism) drone attacks that were carried out by foreign forces in Nangarhar have had a huge positive impact on the security situation in this province,” said provincial government spokesman Attaullah Khogyani. “So we hope that foreign forces expand their efforts here.”

Gen. John W. Nicholson Jr., the top U.S. military commander in Afghanistan, was quoted by The Washington Post on Tuesday as saying the emphasis of new rules of engagement approved by President Barack Obama last month would be shifting to the east.

Those rules now allow U.S. commanders to use American air power for offensive missions against the Taliban and to send troops to fight alongside regular Afghan forces. In the past air support was provided only to Afghan special forces.

Khogyani, in an apparent allusion to Pakistan, added: “Our neighbors have supported terrorists for a long time. The regional intelligence agencies and our neighbors have always tried to make problems in Nangarhar because it is a border province, so there is a need of help from foreign forces.”

Haji Ghalib, the head of Nangarhar’s Achin district which has been a hotbed of Islamic State activity, said American reinforcements would be “vital” in providing security for Afghans living in the east.

“It is a reality that we can’t fight the Taliban or Daesh unless we have the foreign support,” he said using the Arabic acronym for Islamic State.

The U.S. has regularly conducted counterterrorism operations in Afghanistan’s eastern mountainous region that borders Pakistan and from which the Islamic State group has been operating. But targeting the Taliban — who are also prevalent in the area — was prohibited under those operations.

The eastern provinces were a major target of coalition operations at the height of the war during the U.S. surge which lasted from 2009 to 2012. At the time the U.S. had 100,000 troops in the country, along with 40,000 soldiers from NATO and partner nations.

Although the Taliban were pushed out of large stretches of southern and eastern Afghanistan during the surge, the insurgents quickly started trickling back and by 2015 — when coalition forces formally ended their ground combat mission — were again in control of large parts of the countryside.

Just hours after Nicholson’s comments Tuesday, a ground and air operation by Afghan security forces in Nangarhar killed 13 Taliban fighters and wounded more than a dozen others, local officials said.

Afghanistan’s intelligence agency said Wednesday that a Taliban leader and three of his fighters were arrested in a separate incident in the province.

This particular group of fighters had carried out several terrorist attacks in the past and was caught with weapons and a suicide vest, the agency said.