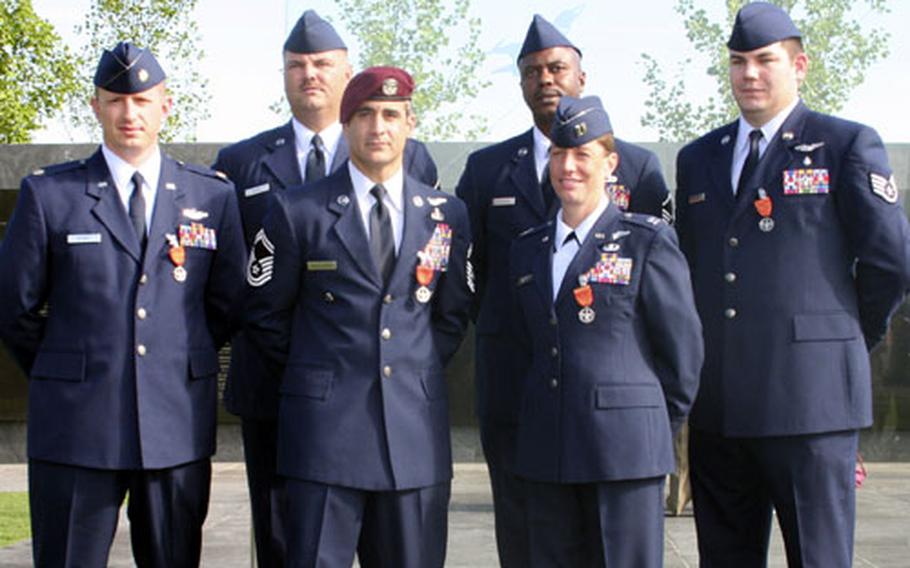 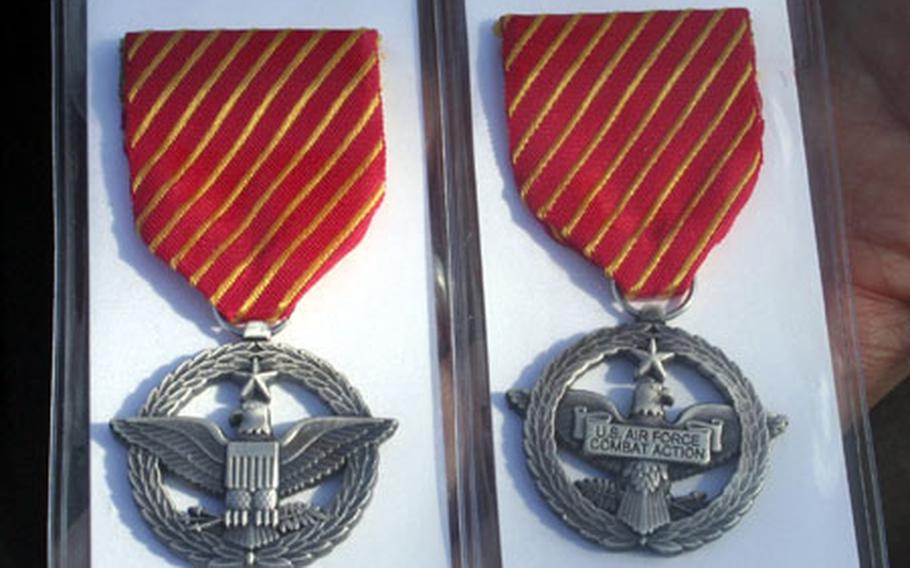 The new Air Force Combat Action Medal is the first U.S. military medal to feature a diagonal stripe in the ribbon, according to experts in military heraldry. A Pennsylvania manufacturer, Bally Ribbon Mills, had to purchase a special loom to ensure that the ribbon could be produced in the United States. (Lisa Burgess / S&S)

ARLINGTON, Va. &#8212; The first six airmen to be awarded the Air Force Combat Action Medal were pinned with the gold-and-scarlet device on Tuesday by Air Force Chief of Staff Gen. T. Michael Moseley.

Moseley presented the medals to the two officers and four enlisted airmen during a ceremony at the Air Force Memorial, which overlooks the Pentagon in Arlington.

The medal was created to recognize Air Force members who are engaged in air or ground combat &#8220;outside the wire&#8221; in combat zones.

Airmen who are under direct and hostile fire, or who personally engaged hostile forces with direct and lethal fire are eligible to receive the award.

The medal has been eagerly anticipated, particularly by special operations forces, whose work often brings them into ground combat environments, and airmen who are performing nontraditional jobs in Iraq and Afghanistan to help out the Army and Marine Corps.

&#8220;We&#8217;ve been working in the joint environment for the longest time, and we didn&#8217;t have a proper way of recognizing people&#8221; who have successfully fought on the ground, not just the air, Colon-Lopez told Stars and Stripes after Tuesday&#8217;s ceremony.

&#8220;We had sort of half-measures (such as the Iraq or Afghanistan campaign medal) but not our own combat medal, like the other services,&#8221; he said.

The decoration is based on the scarlet-and-yellow insignia Mitchell had painted on the aircraft that he flew over Saint-Mihiel, France, during World War I. Members of Mitchell&#8217;s family attended Tuesday&#8217;s ceremony and were presented with a Combat Action Medal in a special commemorative case, in honor of their ancestor.

The medal was designed by Susan Gamble, Master Designer for the U.S. Mint and Air Force spouse, in conjunction with the Army Institute of Heraldry at Fort Belvoir, Va.

An A-10 pilot, Raspet was deployed to Afghanistan when he and his wingman were called to cover a joint U.S. and Afghan convoy. Raspet and his wingman rolled in with the lethal 30 mm cannons, eliminating the threat, and continued to provide close-air support.

Allen was serving as a gunner on an MH-53 Pave Low special operation helicopter when the lead chopper was shot down by insurgents and his own bird was hit by a barrage of surface-to-air fire. The airman returned fire, talked his pilot into a &#8220;flawless approach&#8221; to help the downed aircraft, and then set up a defensive perimeter to cover the Special Forces as they rescued the other crew, then covered them once again as they flew out of the kill zone, again under fire.

Peterson was driving the command truck for a 20-vehicle supply convoy near Balad, Iraq. Peterson&#8217;s vehicle hit a roadside bomb filled with steel ball bearings. His vehicle stalled, the radio destroyed, and with shrapnel and glass in his head and left arm, Peterson nevertheless checked on his commander and gunner, secured the perimeter and helped get word back to base command.

Paxton was embedded with a Marine Expeditionary Force supply convoy along the border of Kuwait and Iraq when the trucks were attacked. Paxton and his team returned fire and did so five more times over the next 18 hours, completing the mission.

Colon-Lopez deployed to Afghanistan with elements of the Afghan National Strike Unit on a dangerous mission to capture Taliban leaders and look for chemical weapons. The helicopter bringing the team into the fight was attacked, but Colon-Lopez pressed forward, overrunning enemy positions.

Then-1st Lt. Black, a AC-130H gunship navigator, and her crew attacked Taliban positions near the enemy-held city of Kandahar, Afghanistan, as the Taliban attempted to advance on U.S. Special Forces and their allies. The assault Black led helped lead to the capture of the last Taliban and al-Qaida stronghold in Afghanistan.