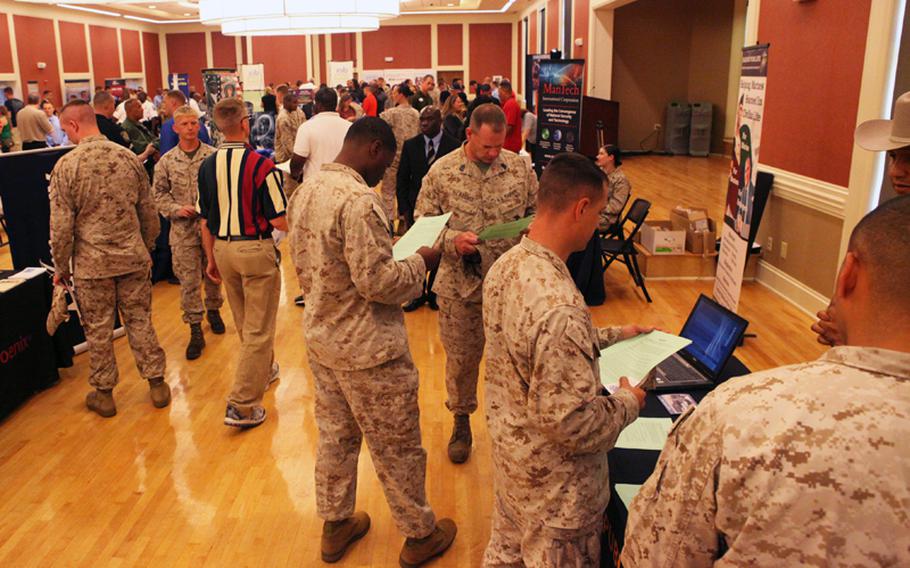 Marines speak with employers during a job fair at Marine Corps Base Camp Lejeune on July 19. More than a dozen companies, departments and organizations spoke to service members, military spouses and base patrons at the function. (Nikki Phongsisattanak/U.S. Marine Corps)

WASHINGTON &mdash; Officials from the Joining Forces campaign say they have helped 125,000 veterans and military spouses find jobs in the last year and are setting a new goal of getting another 250,000 hired in coming years.

First lady Michelle Obama announced the jobs figures at her appearance at Naval Station Mayport in Florida on Wednesday. She identified several new companies committed to hiring veterans. The campaign had already secured more than 175,000 commitments for veteran hires this year.

Officials said the hiring numbers are a positive sign, not just of public efforts to find veterans jobs but also of corporate interest in their skills and talents.

&ldquo;If you can repair a helicopter engine in Mayport &hellip; then clearly you have what it takes for manufacturing. If you can operate communications equipment from a tent in Afghanistan, then clearly you&rsquo;re ready to succeed in our high-tech industries here at home.&rdquo;

However, Bureau of Labor Statistics data shows that the number of veterans of working age fell by almost 430,000 over the last year, casting doubt over whether the positive unemployment news is just a statistical correction.

Last August, Obama and Joining Forces staffers announced plans to convince companies to hire 100,000 veterans and military spouses by then end of 2013. Since then, the campaign has held frequent press conferences and base events to highlight their progress.

Among the biggest successes came in February, when officials from 29 companies &mdash; including JPMorgan Chase, AT&T, Delta airlines &mdash; announced their 100,000 Jobs Mission with Joining Forces, pledging to make that many veteran hires by 2020.

A full list of commitments made by companies is available on the Joining Forces website at http://www.whitehouse.gov/joiningforces/commitments.