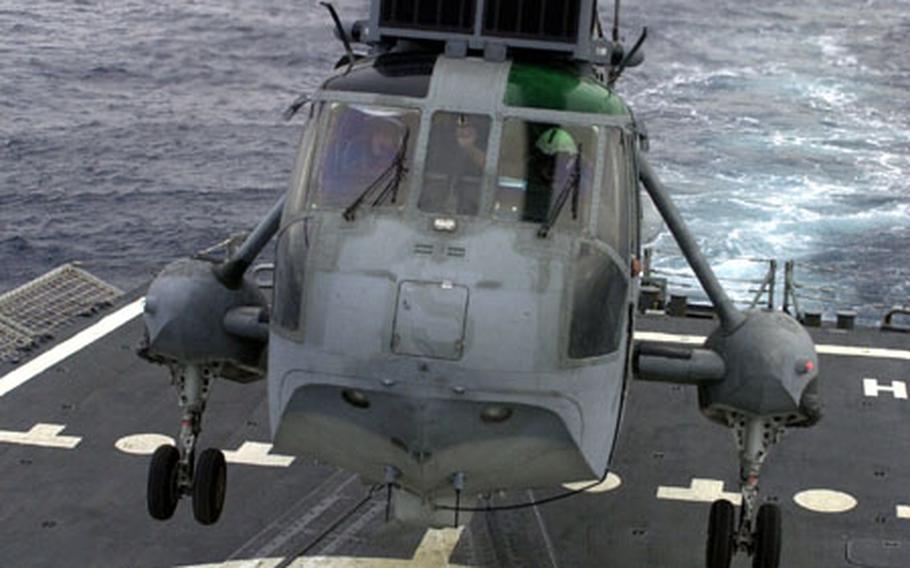 A Spanish helicopter with special forces takes off the frigate Navarra during a multinational exercise in the Mediterranean Sea last week. (Scott Schonauer / S&S)

A Spanish helicopter with special forces takes off the frigate Navarra during a multinational exercise in the Mediterranean Sea last week. (Scott Schonauer / S&S) 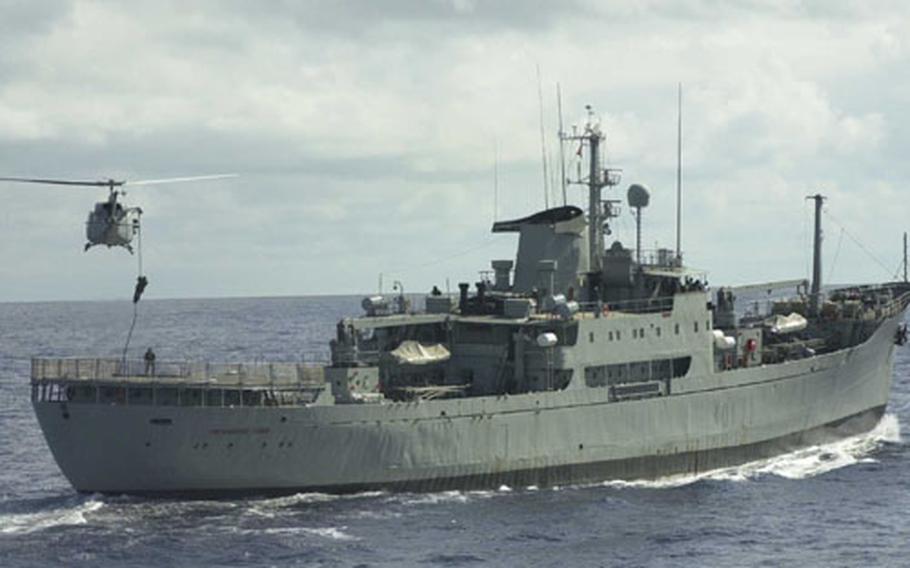 A Spanish helicopter with special forces troops takes off from the frigate Navarra. (Scott Schonauer / S&S) 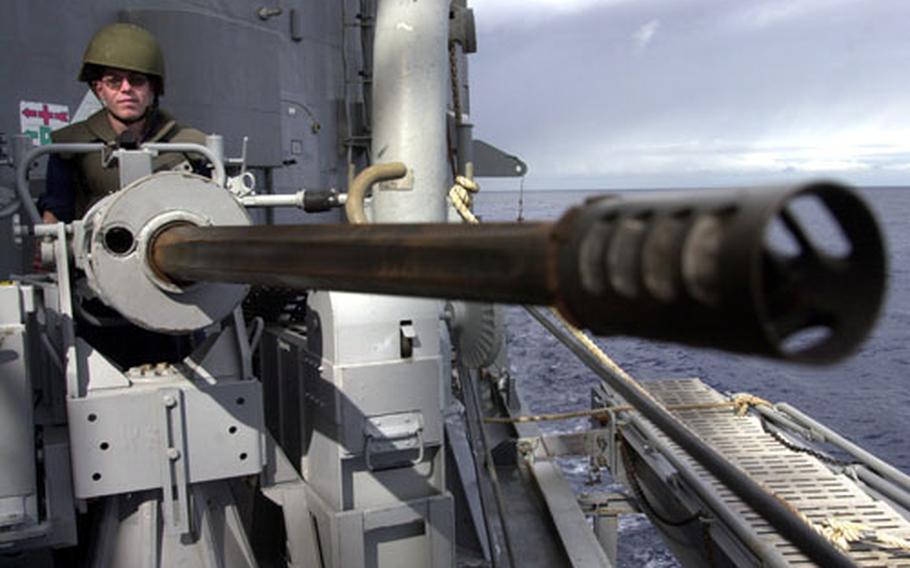 A U.S. sailor aims a 25 mm chain gun aboard the USS Nicholas during a multinational exercise in the Mediterranean Sea on Friday. (Scott Schonauer / S&S) 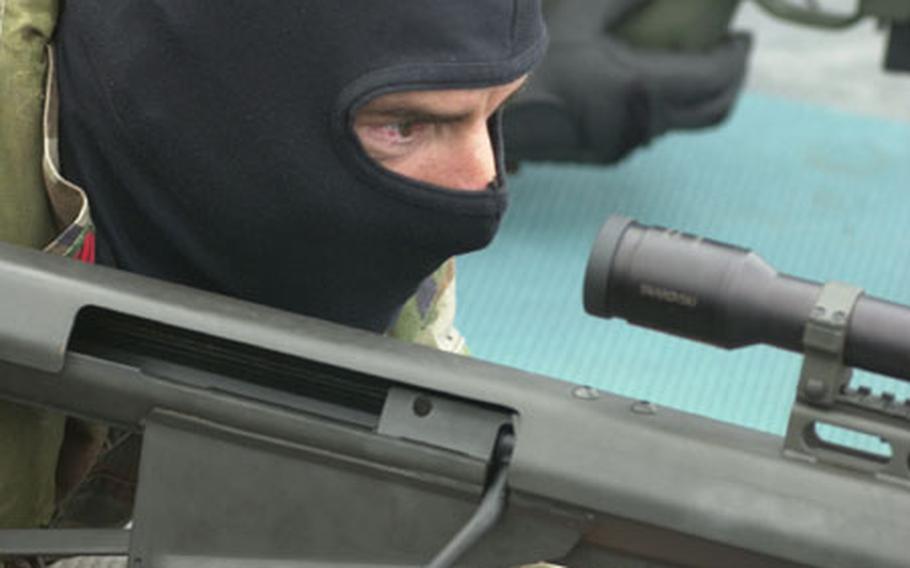 A Spanish marine sniper on the deck of the Spanish frigate Navarra takes aim during a multinational exercise in the Mediterranean Sea last week. The U.S. military and four other countries that are part of the Proliferation Security Initiative participated in SANSO &#39;03, a Spanish-led exercise to test the interdiction of ships suspected of carrying weapons of mass destruction. The three-day exercise ended Friday. (Scott Schonauer / S&S)

ABOARD THE SPANISH FRIGATE NAVARRA, Mediterranean Sea &#8212; The training exercise was like a scene from a Tom Clancy-inspired action movie on the high seas.

A multinational naval task force plans to storm a merchant ship carrying ballistic missiles and chemical weapons. The cargo is destined for a terrorist group.

Special operations forces board the ship by sliding down a rope dangling from a Spanish helicopter. As the team rushes to overtake the crew and take control, snipers aboard a circling U.S. copter provide cover.

The drill that played out Friday in front of reporters might have had the drama of a high-budget Hollywood flick, but navy commanders claim the scenario isn&#8217;t far-fetched.

That is why military forces from five countries practiced the complex and potentially dangerous mission of interdicting ships suspected of transporting weapons of mass destruction.

&#8220;I think we need to send a message to everyone that there is a real problem, and that this affects many people in the world,&#8221; said Vice Adm. Fernando Armada, deputy to the Spanish Fleet admiral.

The nations that participated in the Spanish-led exercise are part of a U.S.-led alliance aimed at stopping the trafficking illegal arms. It was the third of 10 planned through early next year.

The Proliferation Security Initiative, which President Bush unveiled in May, includes 11 nations that have united to stop the trade and delivery of such weapons.

The three-day exercise in the western Mediterranean Sea was a chance for ships and planes from the United States, Spain, France, Britain and Portugal, to improve interdiction tactics and build teamwork. Other alliance members &#8212; Australia, Germany, Italy, Japan, the Netherlands and Poland &#8212; sent observers.

While commanders insisted the exercise was not directed at any specific nation, there is no argument that countries such as Iran and North Korea are high on the group&#8217;s weapons trafficking list.

Washington and others have accused North Korea of smuggling weapons, while Iran is suspected of secretly developing an atomic bomb. There are concerns that both countries could sell the technology to terrorists.

On Dec. 9, military commandoes seized the Sosan in the Arabian Gulf and found 15 missiles hidden underneath sacks of cement.

Although the freighter was eventually allowed to deliver the missiles to Yemen, navy commanders point to the incident as proof that people are using international waters to ship weapons.

&#8220;I think the important thing was to discover that inside the ship were weapons of mass destruction, missiles,&#8221; Spanish Navy Capt. Ramon Marquez Montero said. &#8220;It&#8217;s not important the matter of how many. It is important that it really happened and we discovered that.&#8221;

Finding weapon smugglers is not easy. Hundreds of ships travel the Mediterranean daily, and inspecting a ship is a risky and time-consuming mission.

It is impossible for U.S. Navy warships to patrol the area alone. That is why the United States has put together an alliance to help.

&#8220;We can&#8217;t direct this ship and say, &#8216;You will cross the Atlantic and go to the United States of America and we will inspect you,&#8217; said Navy Cmdr. Chan Swallow, commander of the guided-missile frigate USS Nicholas, which participated in the exercise. &#8220;From the U.S. defense position, that&#8217;s why we need to have the support of the countries in the Mediterranean, Japan and Australia.&#8221;

Future exercises will help the countries work together like a well-oiled machine, commanders say. Using a football analogy, Swallow said the interdiction training would help the members &#8220;use that play in the game.&#8221;

While the exercise might improve teamwork, Friday&#8217;s display in front of cameras also was aimed at showing the bold steps the military will take to hunt for weapons of mass destruction.