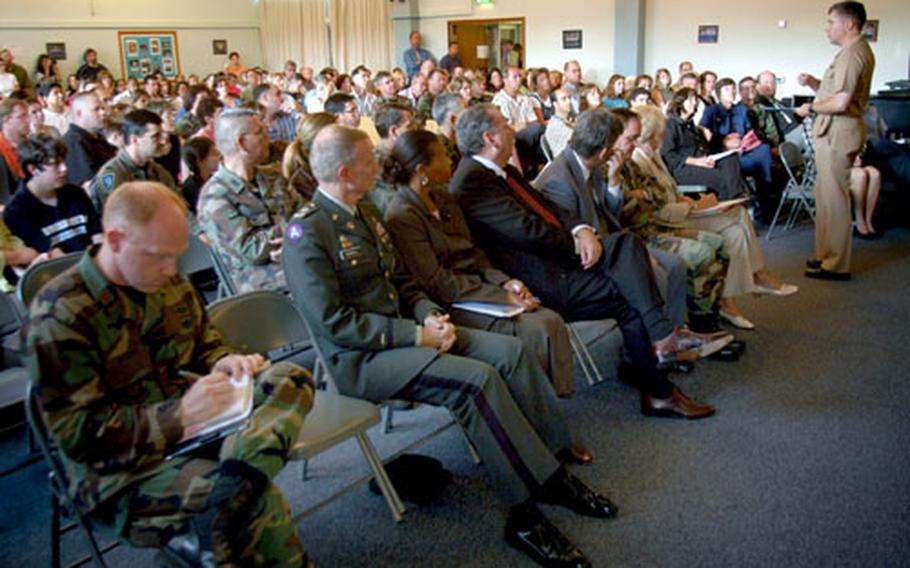 RAF DAWS HILL, England &#8212; Students at London Central Elementary High School will have to look at British schools or home schooling when the school closes next spring, parents were told Wednesday night.

Around 200 parents and students packed the first public meeting on the closing, where top officials from Department of Defense Dependents Schools-Europe and the military fielded questions.

Earlier this week, school officials confirmed that the school would close due to declining student numbers and a reduction of the U.S. military presence in the London area.

&#8220;I&#8217;m here to tell you that the school is closing,&#8221; Brig. Gen. Danny Gardner, director of installations and mission support for U.S. Air Forces in Europe, reiterated at the meeting.

The school enrolls about 275 pupils in kindergarten through 12th grade.

Pam DeFeis, a specialist with the Non-DoD School Program, delivered an overview of programs available to London Central pupils and explained how to get help in choosing a new school.

Generally, pupils in grades K-5 must attend local public schools, if they are available, for which parents can receive some reimbursement.

Those in higher grades can turn to private schools or boarding schools to receive an American-style high school education.

Because English high schools employ a system substantially different from American programs, many U.S. parents keep their kids out of United Kingdom schools in the upper grades.

Parents posed questions and expressed frustration on myriad topics, ranging from what the NDSP would pay for, to whether commanders would support early moves out of London to accommodate people&#8217;s changing needs.

Some wondered whether the money slated to pay for American kids&#8217; tuition in British private schools &#8212; around $40,000 annually &#8212; could be used to create space at other U.S. bases, such as RAF Croughton, which has an elementary program and, until 2003, had a middle school.

The suggestion received loud applause, but DODDS-Europe director Diana Ohman said the idea had been considered and rejected.

Nor is Alconbury High School an option, she said, because the school is already full.

Many questions came from parents from RAF Croughton and Fairford, some of whom said officials had created an all-but-unworkable system for their high school-age children.

Without London Central, according to parents from Croughton and Fairford, there are no schools within feasible commuting distance that have American-style curricula.

Their kids would be relegated to home schooling or boarding schools &#8212; or parents would have to ask for reassignment, they said.

Capt. David Thompson from Croughton, who has a high school-age daughter, said after the meeting he might have to consider a reassignment because his family did not want to send the kids away for school.

Alternatives for London Central pupilsGrades K-5: The plan for children in grades K-5 outside of the RAF Croughton area &#8212; which has a Department of Defense Dependents Schools elementary school &#8212; is to have them enroll in local British public schools, for which parents can receive some reimbursement for required expenses such as transportation and books.

If no public schools are available, parents can appeal for an exception to either home school their children or send them to a private English day school.

In both cases, parents can also receive funding from the Non-DoD Schools Program for pre-approved expenses such as tuition.

Grades 6-12: Pupils have three initial options: enroll in a local public school, be home-schooled or attend a local British private school, for which tuition can be reimbursed, depending on the grade level.

Exact reimbursements were unavailable from DODDS officials Thursday but range from $38,000 to about $40,000.

If no private school placement is available, parents can appeal for an exception to send children to a boarding school within the theater.

Tuition reimbursements are based on sponsors&#8217; duty station location and other factors, officials said, but no figures were available from DODDS.

Caps may be considered on a case-by-case basis, according to a DODDS-Europe spokesman.

Other reimbursements: Parents of pupils attending British schools can recoup some expenses, such as costs for enrollment in Advanced Placement Program courses, required examination fees, mandatory field trips and some one-time school fees.

Other expenses such as uniforms and drivers education courses are not covered.

More information can be found at: http://www.eu.dodea.edu/nondod.htm