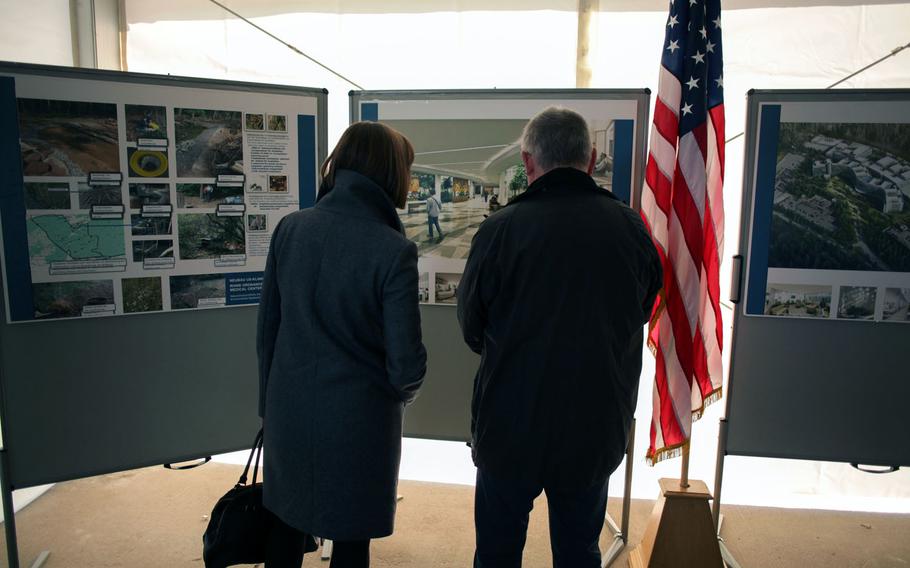 Attendees at the ground breaking for a new U.S. military hospital in Weilerbach, Germany, Friday, Oct. 24, 2014, look at an artist's rendering of the new facility, which is expected to open in 2022. (Matt Millham/Stars and Stripes)

Attendees at the ground breaking for a new U.S. military hospital in Weilerbach, Germany, Friday, Oct. 24, 2014, look at an artist's rendering of the new facility, which is expected to open in 2022. (Matt Millham/Stars and Stripes) 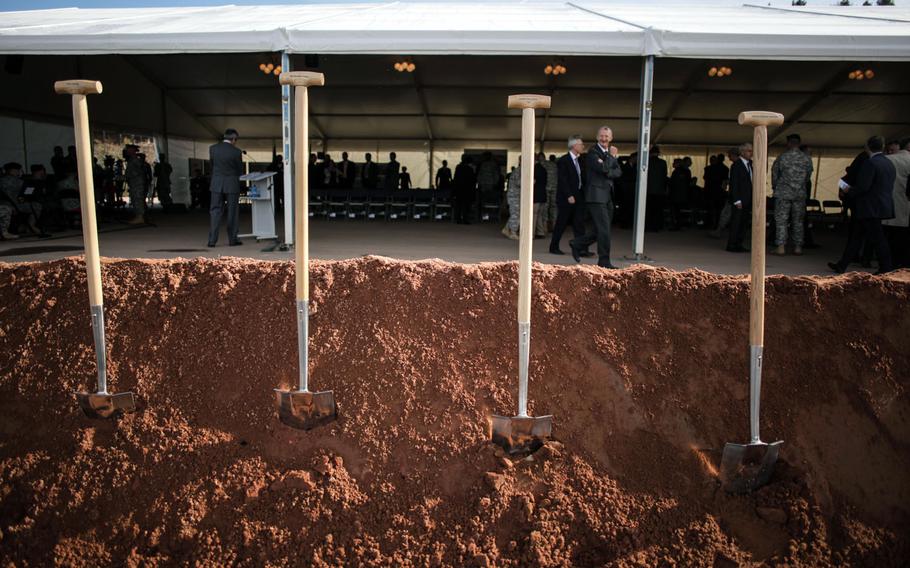 Shovels are lodged in a pile of dirt before a ground breaking for a new U.S. military hospital in Weilerbach, Germany, Friday, Oct. 24, 2014. (Matt Millham/Stars and Stripes) 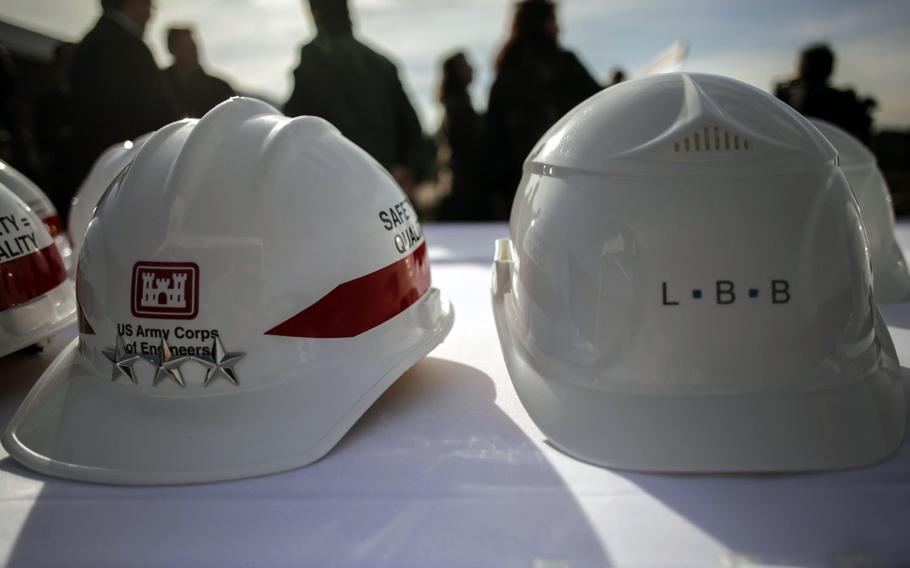 Hard hats for American and German officials sit on a table Friday, Oct. 24, 2014, before the ground- breaking ceremony for a new U.S. military hospital adjacent to Ramstein Air Base on an old U.S. Army ammunition storage area. (Matt Millham/Stars and Stripes) 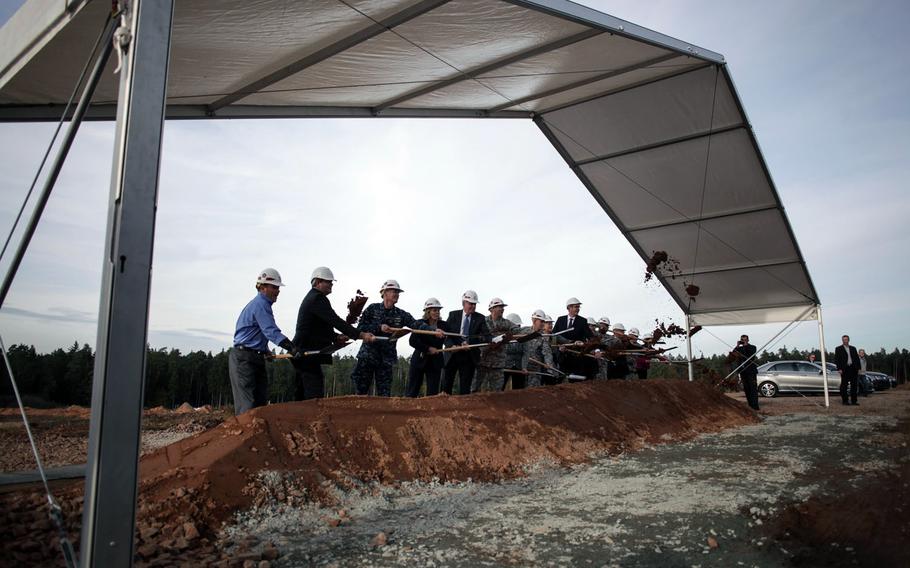 German and American officials heave shovel loads of dirt Friday, Oct. 24, 2014, during a ground-breaking ceremony for a new U.S. military hospital in Weilerbach, Germany, adjacent to Ramstein Air Base. (Matt Millham/Stars and Stripes) 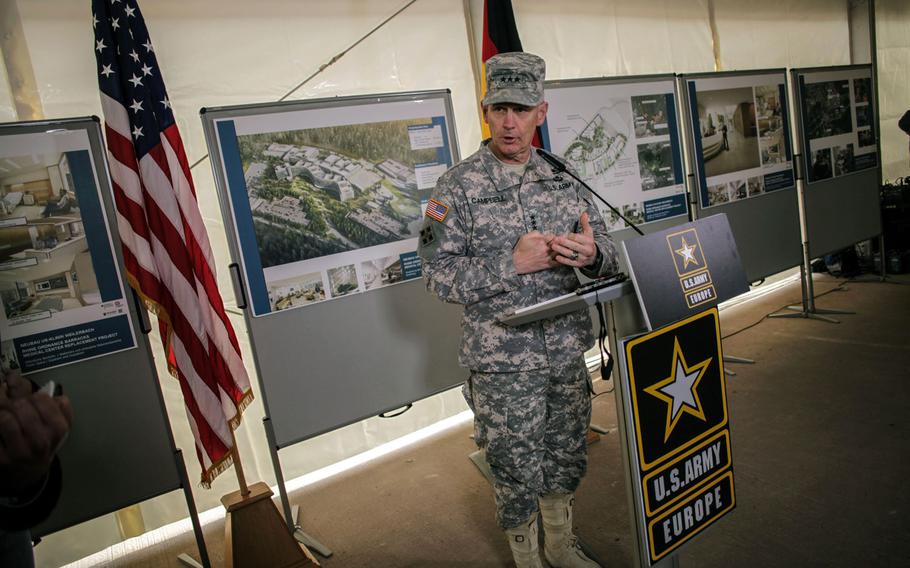 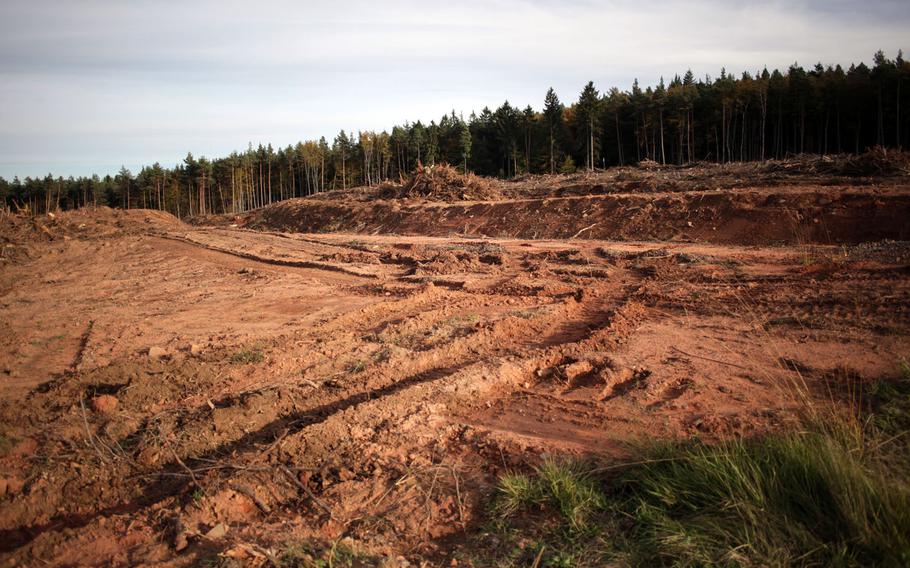 A former U.S. Army ammunition storage area on Rhine Ordnance Barracks, adjacent to Rammstein Air Base, has been cleared for the construction of a new military hospital. U.S. and German officials took part in a ground-breaking ceremony Friday, Oct. 24, 2014, to symbolize the start of the $990 million project. (Matt Millham/Stars and Stripes) 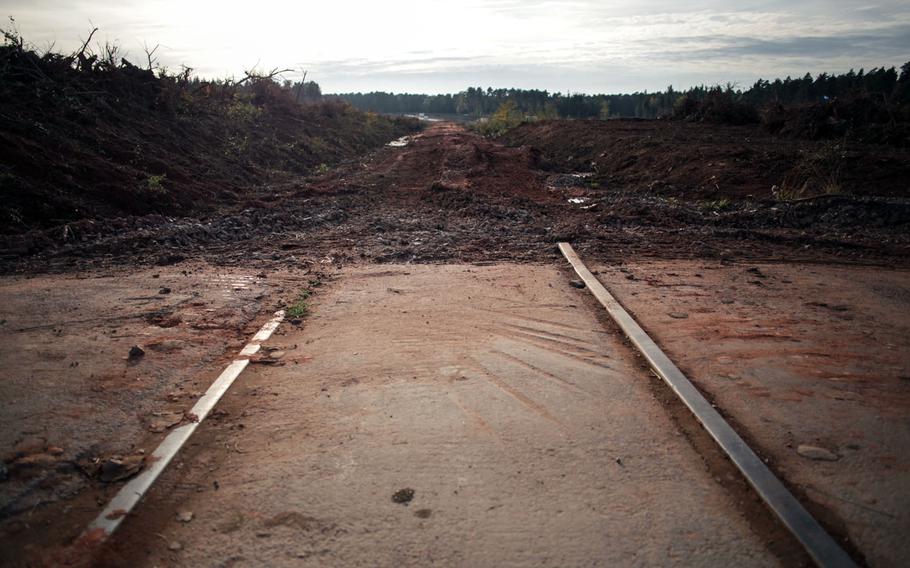 Train tracks and a rail bed at a former U.S. Army ammunition storage area in Weilerbach, Germany, have been removed ahead of the start of construction for a new military hospital. U.S. and German officials held a symbolic ground-breaking ceremony for the project on Friday, Oct. 24, 2014. (Matt Millham/Stars and Stripes) Piles of dirt and rubble mark the spots where concrete and steel ammunition bunkers once stood at the U.S. Army's ammunition storage area in Weilerbach, Germany. The bunkers and the forest around them have been cleared to make way for a new military hospital to replace the Army's aging Landstuhl Regional Medical Center. (Matt Millham/Stars and Stripes)

RHINE ORDNANCE BARRACKS, Germany — After more than a year of delays, American and German officials heaved the first shovels of dirt Friday to mark the symbolic start of construction on a nearly billion-dollar U.S. military hospital here.

Expected to open in 2022, the new facility will replace the Army’s aging Landstuhl Regional Medical Center and the Air Force’s medical clinic at Ramstein Air Base, both of which were built in the 1950s and cost millions of dollars a year to maintain.

Work at the new hospital site began in earnest in February after the U.S. military and its German counterparts laid out plans to mitigate the project’s environmental impact, allaying the concerns of environmental groups whose lawsuits had stalled the project.

Since finishing tree cutting in February, workers have begun demolishing unused buildings, including a railhead, warehouses and dozens of bunkers that once housed ammunition.

The United States spent some $16 million planting trees, relocating animals and building habitats and breeding grounds for other creatures to mitigate environmental damage.

“The heavy construction, which is really the movement of the earth and shaping of the earth, will be beginning later this fall or early in the new calendar year,” said Lloyd Caldwell, the U.S. Army Corps of Engineers’ director of military programs.

That early work entails laying utility lines for the new facility. The construction of the hospital and companion buildings will start sometime in the next couple of years, Caldwell said.

“There’s a lot of work behind the scenes at the federal, local and state level,” both in Germany and in the U.S., Lt. Gen. Donald M. Campbell Jr., commander of U.S. Army Europe, said after the ceremony.

Germany’s Defense Ministry had sought to help the U.S. expedite the project, waiving a public environmental review that was required by German law. Environmental groups sued, and the review eventually went forward. The legal battle and review set the project back more than a year.

Congress has authorized up to $990 million for the new hospital complex, which will include a parking structure, utility plants and a warehouse, in addition to a 1 million-square-foot hospital building.

The Army Corps of Engineers is planning for a hospital with 120 exam rooms, 68 beds and nine operating theaters. The new structure will include features that officials said will lead to better outcomes for patients. Patient rooms will have natural light and views of nature, and they will be larger than those in Landstuhl to accommodate family members.

Operating rooms will also have more square footage to make room for equipment and to meet modern standards.

One of the most important features of the new hospital is its location, adjacent to Ramstein Air Base. It will take about five minutes to get there from the flight line, compared with the seven-mile drive to Landstuhl, which can take up to 30 minutes with autobahn traffic, said Maj. Gen. Christopher J. Bence, vice commander of the Third Air Force and 17th Expeditionary Air Force at Ramstein.

Landstuhl, the U.S. military’s largest overseas hospital, is the first stop for American casualties evacuated from the Middle East and Africa. It treats thousands of servicemembers, retirees and family members every year.

Built during the Cold War, the rambling spine-and-rib structure was designed to minimize casualties from Soviet bombs. That design makes it difficult and time-consuming to navigate. Most patient rooms, built for the massive numbers of casualties expected from Soviet battles that never happened, look out on other parts of the hospital.

Landstuhl has handled thousands of wounded from the wars in Iraq and Afghanistan, as well as casualties from the Sept. 11, 2012, attack on Benghazi, Libya. It remains the U.S. military’s premier overseas trauma center. But renovations and general upkeep run between $8 million and $10 million a year, according to hospital officials.

The new hospital, yet to be named, will address most if not all of Landstuhl’s weaknesses.

“The last 13-plus years of conflict have validated and proven the vital need for world-class military medical care in this region of the world,” Campbell said.

The Army is making plans to repurpose the Landstuhl hospital after the new facility is finished.

The base where Landstuhl resides also hosts day-care and teen centers, a school and military housing, as well as a Fisher House, which provides housing for families of wounded servicemembers and other military offices and organizations.