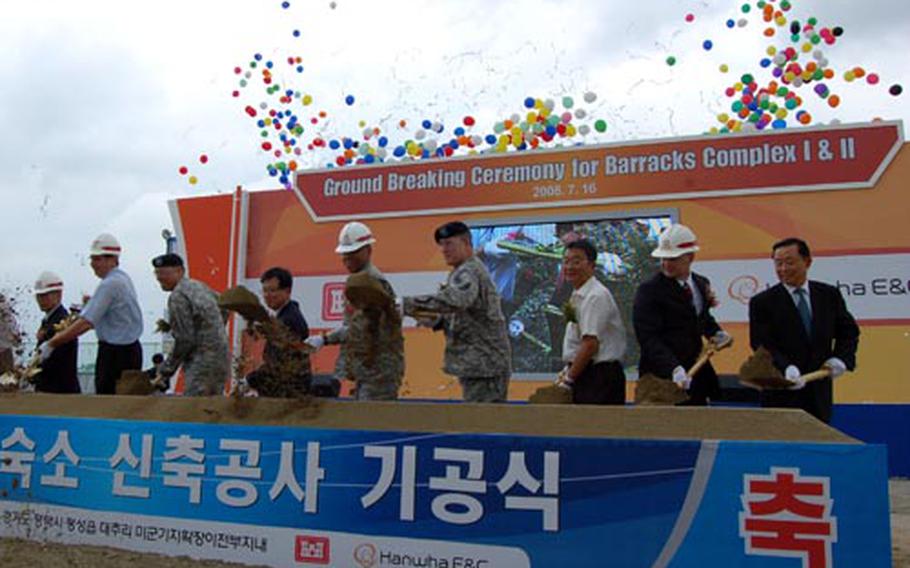 Officials from the U.S. Army and the Hanwha Construction and Engineering Corporation throw shovels of dirt during a groundbreaking ceremony Wednesday in Pyeongtaek. (Jimmy Norris / S&S)

Officials from the U.S. Army and the Hanwha Construction and Engineering Corporation throw shovels of dirt during a groundbreaking ceremony Wednesday in Pyeongtaek. (Jimmy Norris / S&S) 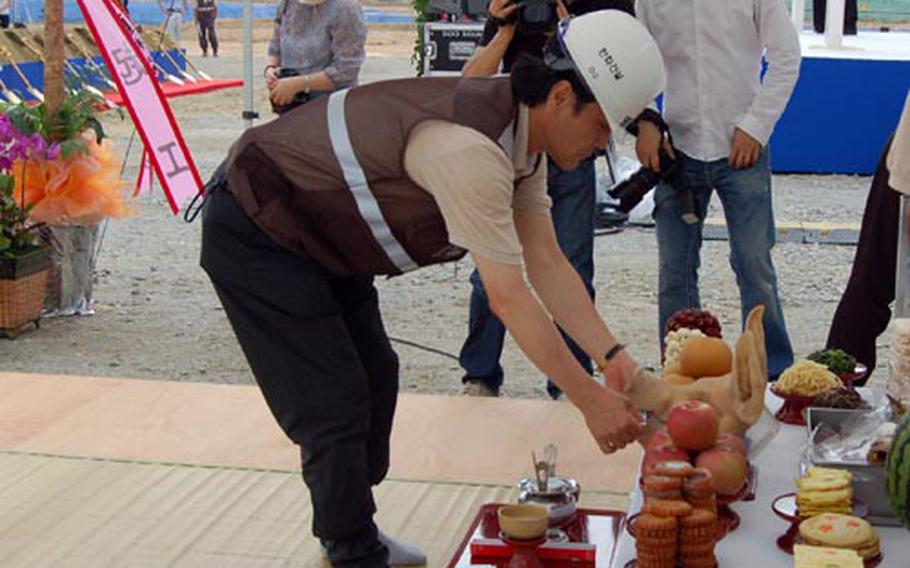 Park Sang-bong, of the Hanwha Construction and Engineering Corporation places money into the mouth of a severed pig’s head during a traditional Korean safety ceremony at a Camp Humphreys groundbreaking Wednesday. (Jimmy Norris / S&S)

CAMP HUMPHREYS, South Korea &#8212; Speeches, shovels and, oh, a severed pig&#8217;s head marked another step in the ongoing expansion of Camp Humphreys on Wednesday, when officials broke ground on four new barracks buildings on the 200-acre stretch of land known as Parcel 1.

In preparation to make Camp Humphreys the U.S. military&#8217;s flagship installation in South Korea, the barracks will be Parcel I&#8217;s first constructed buildings and would be the first on the peninsula to meet the Army&#8217;s one-plus-one standard, officials said. That plan that would give each soldier a private sleeping area, while two soldiers share a bathroom and kitchenette.

"It wasn&#8217;t too long ago that we housed our soldiers in 50-year-old Quonset huts that were like ovens in the summertime and iceboxes in the winter. They were drafty. They leaked when it rained and they were about as aesthetically pleasing as living in a warehouse," Dumoulin said. "The bad old days are gone. They are history. No more Quonsets. No more sub-standard barracks. No more just making do because this has been a one-year assignment."

Following remarks by several of those connected with the project, Army officials and members of the Hanwha Engineering and Construction Corp. broke ground during a shovel ceremony.

Afterward, Hanwha officials participated in a traditional shamanistic Korean ceremony, which consisted of burning incense and putting money into the mouth of a severed pig&#8217;s head. To Koreans, a pig represents good luck.

The event was the second ground breaking ceremony in connection with the Humphreys&#8217; expansion. Ground was broken on the 2018-acre Parcel 2 Nov. 13. Parcel K, which covers 110 acres around Parcel 1, had no official groundbreaking. When the expansion is completed, Camp Humphreys will occupy more than 3,500 acres.