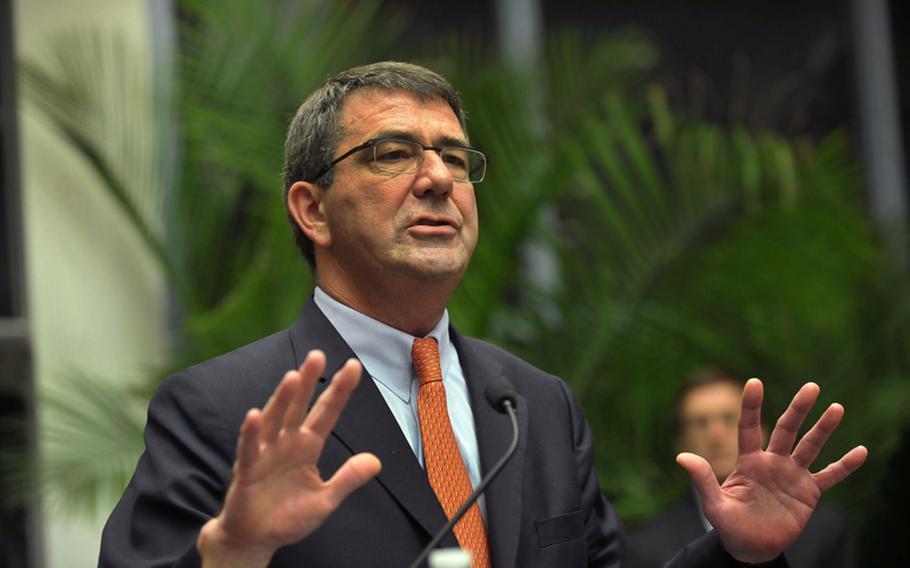 Deputy Secretary of Defense Ashton B. Carter addresses Space and Naval Warfare Systems Command employees at SPAWAR headquarters during a visit to Joint Base Charleston, S.C., for briefings on space and naval warfare systems June 18, 2012. (Glenn Fawcett/Department of Defense)

&ldquo;It is not possible to devise a plan that mitigates these consequences substantially,&rdquo; he said. &ldquo;This will cause serious disruptions throughout the department.&rdquo;

Despite months of dire predictions and widespread opposition to the so-called sequestration cuts, Congress appears no closer to finding solutions than it was a year ago, when lawmakers approved the idea as a &ldquo;poison pill&rdquo; mechanism to help balance the budget.

Under the law, about $54 billion will be trimmed from both defense and non-defense discretionary spending accounts in 2013, and those savings carried for each of the next 10 years.

Most veterans programs and military personnel accounts will be exempted from the cuts, under guidance issued by the White House. But for other defense programs, sequestration means an automatic and unavoidable 10 percent budget cut.

The hearing before the House Armed Services Committee on Wednesday dealt little with finding alternatives to sequestration. Instead it focused primarily on whether the White House and Defense Department are doing enough to prepare for that budget squeeze.

Other lawmakers sparred over whether President Barack Obama has done enough to force Congress to find alternative cost-cutting plans, a process bogged down in arguments over tax policies and social services spending. Both parties blamed the other for passing the unpalatable cuts to avoid a government shutdown.

Jeff Zients, acting director of the Office of Budget and Management, said the automatic cuts will also mean layoffs for thousands of teachers and severe cuts to law enforcement programs.

He declined to offer more specifics, saying it would be premature and misguided.

&ldquo;We don&rsquo;t need to be moving rocks around at the bottom of the cliff to try and create a less painful landing,&rdquo; he said. &ldquo;We need to keep the car from going off the cliff.&rdquo;

Carter did list potential impacts of a 10 percent cut on military accounts. Even if personnel programs are protected, base support services and housing maintenance would suffer. Training programs would be scaled back.

Fewer weapons would be bought, Carter said. Based on projections, the department would purchase four fewer F-35 aircraft, 12 fewer Stryker vehicles and 300 fewer Army tactical vehicles in the coming years. Other equipment order reductions could actually increase the cost of resupplying troops, with contract alterations adding to the price of new items.

Carter said flying hours for pilots would be reduced by &ldquo;several hours a month&rdquo; and that Navy steaming days would be cut several days each quarter.

Defense Health Program funding would be reduced, which could mean &ldquo;delays in payments to service providers ... and potentially some denial of service,&rdquo; he said.

Civilian defense employee furloughs are possible, Carter added. Overseas contingency accounts could also be affected, limiting some equipment and training for combat units, although Carter said officials are working to avoid that.

Zients stressed that Congress has five months to pass a deficit reduction alternative, but McKeon argued that defense industry officials are already &ldquo;living in the shadow of sequestration&rdquo; and planning for devastating job losses.

Senate and House leaders have floated several proposals, including simply delaying the cuts until later in 2013, but have little consensus on any single plan.