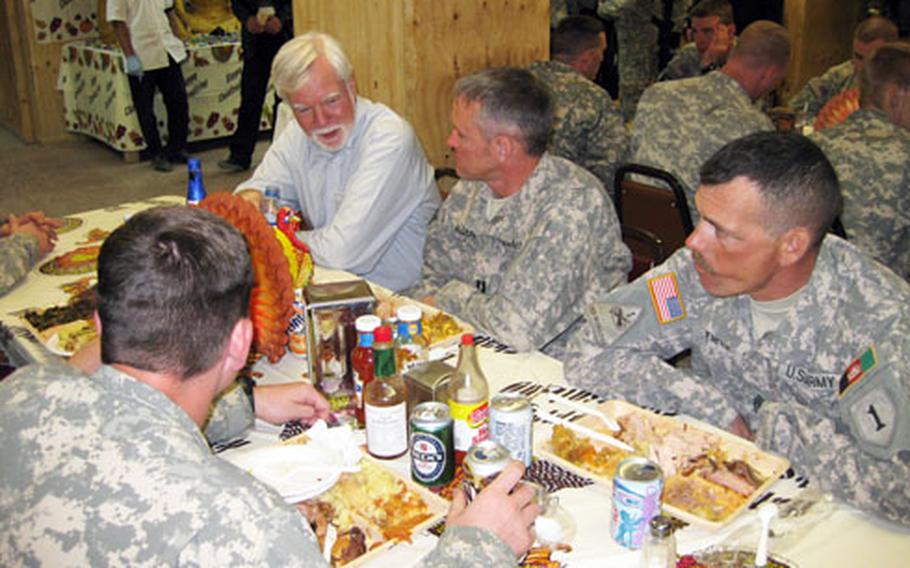 Undersecretary of the Army Nelson Ford, left, eats a Thanksgiving meal with soldiers with an Afghan Army Embedded Training Team working out of Gardez in eastern Afghanistan. (Luke Knittig/Courtesy of the U.S. Army)

LANDSTUHL, Germany &#8212; The Army has concluded it is very difficult to sustain effective unit deployments longer than 12 months, a top Army official said.

Undersecretary of the Army Nelson Ford was responding to a question Friday about the possibility of reverting to 15-month deployments if a "surge" of U.S. troops is ordered in Afghanistan.

"We&#8217;ve found that 15 months is a very long time, very difficult," Ford said. "It&#8217;s not just 25 percent more. It seems to have a bigger effect on efficiency, the effectiveness of the unit that goes. It&#8217;s the effect of the prolonged absences from home. It&#8217;s the effect of missing two birthdays or two Christmases, two Thanksgivings in a row. We have one unit that&#8217;s got deployment dates that will currently mean that they&#8217;ll miss three out of four Christmases. That&#8217;s tough.

"I think the Army will say yes to almost any mission; we&#8217;ve done this for 230 years. So we didn&#8217;t have a good idea of what the red lines are. I think that we&#8217;ve come to the conclusion that it is very difficult to sustain effective deployments more than 12 months long."

Ford was at Landstuhl Regional Medical Center wrapping up a nearly week-long trip from the States that included stops in Heidelberg and Stuttgart, Germany, and Afghanistan. In addition to eating turkey with soldiers, he spent Thanksgiving awarding Purple Hearts and Combat Action Badges to U.S. troops in Afghanistan.

Late last month, Defense Secretary Robert Gates said he supported a troop buildup in Afghanistan that&#8217;s been estimated at more than 20,000 American troops over the next 12 to 18 months, according to The Washington Post. President-elect Barack Obama pledged during his campaign to withdraw nearly all U.S. troops from Iraq by mid-2010 and has said he would send two or three more brigades to Afghanistan in 2009.

Obama supports increasing the size of the Army, according to his campaign Web site.

Currently, the Army is about at its maximum capability and "about as deployed as it can be," Ford said. He also noted that there are still several units serving 15-month deployments &#8212; the last of which will not finish its deployment until about this time next year.

No Army units would go straight from Iraq to Afghanistan, Ford said. Units in Iraq would redeploy, and other units that would have gone to Iraq would be re-trained for the Afghanistan mission, he said.