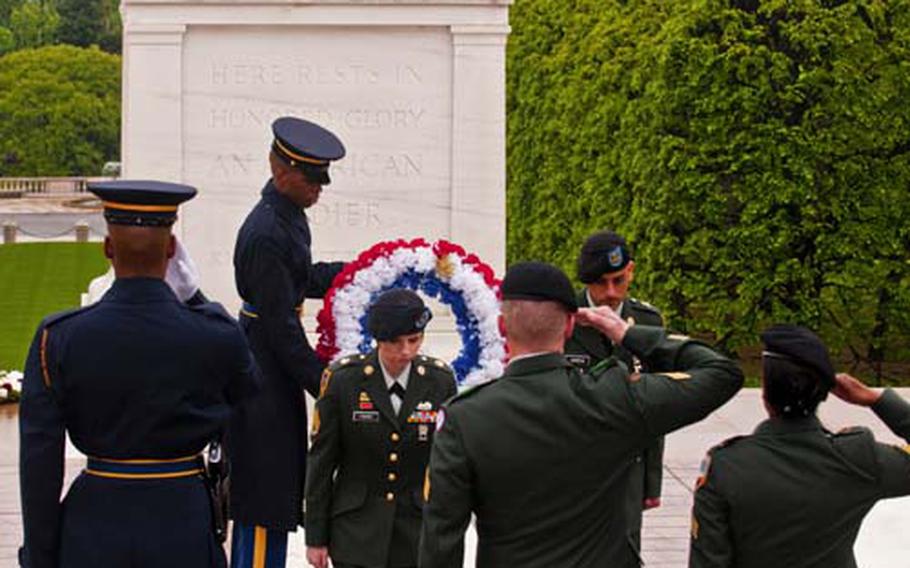 Staff Sgt. Courteney J. Fisher, center, and Specialist Tomas Garcia, far right, return to formation after laying a wreath at the Tomb of the Unknowns in at Arlington National Cemetery on Wednesday. (Richard Lambert/Courtesy of the U.S. Army Reserve)

GINOWAN, Okinawa &#8212; Japan&#8217;s government may take one step closer during the weekend to choosing an alternate site for relocating Marine air units now on Okinawa.

The proposed relocation site for Marine Corps Air Station Futenma in Ginowan will be announced to the government&#8217;s ministers and leaders of the three-party ruling majority by Sunday, according to Mikio Shimoji, a member of Japan&#8217;s Diet from Okinawa who met Thursday with Chief Cabinet Secretary Hirofumi Hirano.

Hirano said the government will call for a meeting of ministers by Sunday, Shimoji said on his blog late Thursday.

Whether a choice will be made public immediately is unclear.

A rally against relocating the Marines to any new site on Okinawa is scheduled Sunday in Yomitan. Organizers are expecting up to 100,000 participants.

The government has been reviewing a 2006 U.S.-Japan agreement to close Futenma and move the operations to a new base to be built on Okinawa&#8217;s more rural northeast coast. The committee studying the relocation agreement, headed by Hirano, has decided to scrap that plan and study alternate relocation sites.

In the last few weeks Tokunoshima, a small island 125 miles north of Okinawa, has emerged in the Japanese media as the prime candidate, despite strong local opposition.

Prime Minister Yukio Hatoyama has promised to reach a decision on an alternate site by the end of May.

"I do indeed have a plan in mind," he said earlier last week. "But we are still trying to convince the United States. I cannot relate to the local people a plan that the U.S. will not accept."

Talks with the U.S. will resume Tuesday when Kurt Campbell, U.S. assistant secretary for East Asia and Pacific Affairs, arrives in Tokyo for two days of meetings on several issues.