Official in US to promote South Korean reunification policy 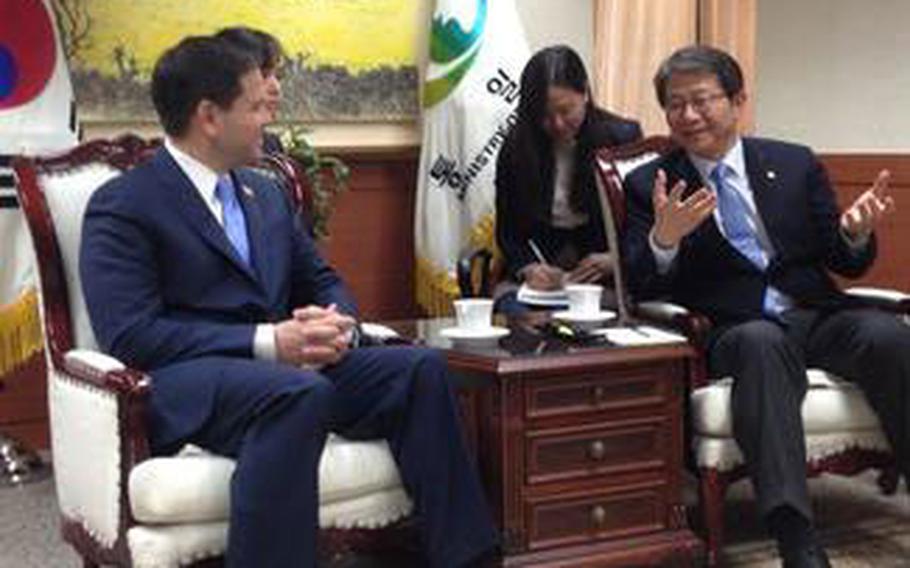 SEOUL, South Korea — South Korea’s top official on North Korea is in the United States to promote his president’s policy on reunification on the peninsula.

During the first visit by a unification minister since 2011, Ryoo Kihl-jae will meet in Washington with Acting Deputy Secretary of State Wendy Sherman, Sen. Marco Rubio, R-Fla., a member of the Senate Foreign Relations Committee, and Rep. Ed Royce, R-Calif., chair of the House Foreign Affairs Committee, according to South Korea’s Yonhap News.

Ryoo was also scheduled to meet with North Korean analysts, U.N. officials to discuss humanitarian aid for the North and Korean-American youth in Los Angeles before returning Sunday to Seoul, Yonhap said. No intinerary was released,

Ryoo is expected to provide a first-hand explanation of President Park Geun-hye’s policy of laying the groundwork for eventual reunification with the North through a series of trust-building measures.

A Unification Ministry spokesperson noted that the ministry is working to increase support for reunification among its “global partners,” including China, Japan and Russia. North Korea has also claimed that it wants reunification, declaring in October that it wanted to achieve reunification in 2015, though the implications of that declaration were unclear. The South Korean government said at the time that the North appeared to be preparing for a full-scale war.

At a September speech in Seoul, Ryoo said one roadblock to reunification is the “negative, passive, and cynical view on the unification of the Korean Peninsula (that) is increasingly prevalent in the international community as well as in Korean society. I believe this issue poses a severe challenge to unification.”

Yoo Chan-yul, a professor of political science and diplomacy at Duksung Women’s University in Seoul, said Ryoo’s efforts are likely to garner little interest in the U.S. at a time when other global issues have higher priority, from the rise of the Islamic State to negotiations over Iran’s nuclear program, as well as the U.S. relationship with China.

“I think the U.S. is very distracted right now,” he said. “Its main focus seems to be on the Middle East, and the rise of China.”

“Kim Jong Un has not become weaker. Rather, he’s become stronger, so how can you talk about reunification under the circumstances?” said Paik Hak-soon, a senior research fellow at the Sejong Institute in Seoul.

“He’s going more for (South Korean) domestic audiences than to accomplish anything,” Paik said. “Of course, the U.S. is an ally and it’s supposed to say that we support South Korea’s unification policy, but it’s a nominal support.”

The prospect of eventual reunification has long been a given for many in South Korea, despite the growing economic, political and cultural disparities between the two countries.

A recent survey by the Seoul National University’s Institute for Peace and Unification Studies found growing support among South Koreans for reunification, with some 55.9 percent of respondents saying reunification is in the South’s best interest. That figure was up more than 7 percentage points from the previous year.