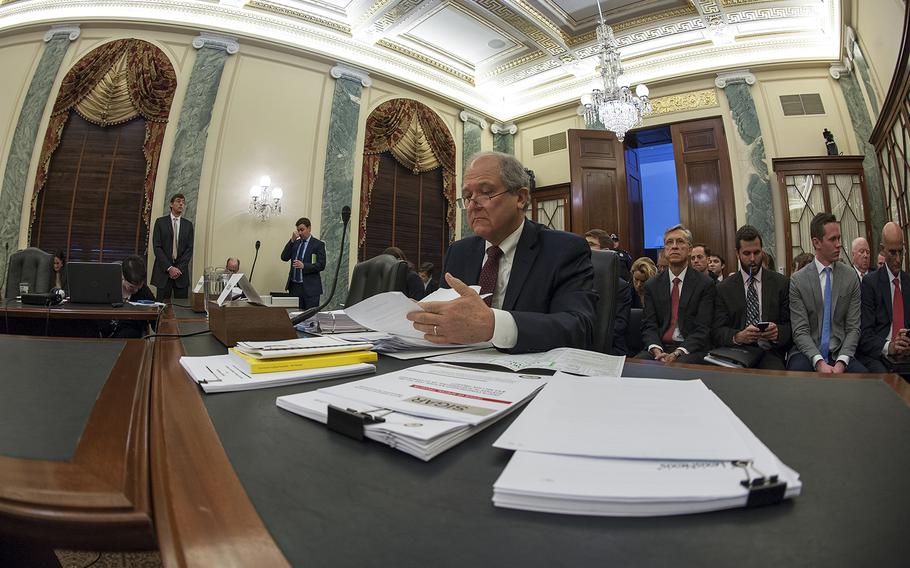 KABUL, Afghanistan — Corruption, fed by U.S. actions during the war, is the biggest obstacle to rebuilding Afghanistan, the head of a government watchdog agency has warned.

Corruption undermines the legitimacy and viability of the Afghan state and fuels grievances that strengthen insurgents like the Taliban, John F. Sopko, the Special Inspector General for Afghanistan Reconstruction said in prepared remarks for a speech given Wednesday at the University of Pittsburgh.

“The U.S. government initially had little understanding that corruption could threaten its entire security and state-building mission,” Sopko said.

During the 2001 U.S. invasion to oust the Taliban from power, and for years afterwards, “the United States partnered with abusive warlords and their militias to pursue al-Qaida and the Taliban, and supported the installation of these warlords and their militias at high levels of the Afghan government,” Sopko said. “The United States also failed to recognize that vast sums of money injected into the Afghan economy, with limited oversight and pressures to spend, created conditions for corruption.”

A 2015 survey by The Asia Foundation showed Afghans had the least confidence in their government in a decade, partly because of systemic corruption, which those polled said was the third-biggest barrier to national progress after insecurity and unemployment.

“Corruption is particularly a problem when you have huge amounts of money coming from abroad,” said Kate Clark, country director at the Afghanistan Analysts Network. The U.S. alone has appropriated more than $113 billion for Afghanistan reconstruction, Sopko said.

“A culture of corruption and impunity has developed in Afghanistan,” Clark said. “People think they can get away with stealing from the state with relative ease.”

The government has taken positive steps, she said, including establishing the National Procurement Commission, chaired by President Ashraf Ghani and attended by the government’s chief executive officer, Abdullah Abdullah, but challenges remain.

“It’s not that the will isn’t there,” Clark said. “But it’s difficult because the president and CEO inherited an extremely weak and corrupt state at a time when the economy was nose-diving.”

The National Procurement Commission is part of what Ghani has called his “national jihad” on corruption.

Another issue Ghani is tackling is seeking to repatriate roughly $1 billion stolen from Kabul Bank in the form of fraudulent loans in 2010. Sopko said Ghani has asked SIGAR to join a new task force that will attempt to retrieve the stolen funds, particularly those which have been moved to the United States.

“We are currently in the process of exploring options of best international mechanisms to retake money and assets illegally obtained in the case of Kabul Bank,” Zafer Hashimi, deputy spokesman for the president’s office, said in an email. The government was seeking SIGAR’s “advice” and exploring how the agency could “play an effective role as we embark on this important undertaking.”

But many Afghans doubt the government will be able to hold the perpetrators accountable. History has shown that influential citizens are above the law, especially with regard to corruption.

“It will only disclose information about the corruption, but they don’t have a system to bring people to justice,” Kabul University lecturer Saifuddin Saihoon said about the proposed task force.

Saihoon commended Afghan leaders for trying to bring perpetrators of corruption to justice, but said the government is too weak. “It just doesn’t have the power,” he said.

Measures introduced by the United States since 2010 were intended to expose and clamp down on corruption.

Several U.S. and Afghan anticorruption entities were established, but their ineffectiveness was brought to light by the Kabul bank fraud and a second scandal in 2010, Sopko said. Former President Hamid Karzai ordered the release of a key aid who was arrested for obstructing an investigation into a suspected money transfer of billions of dollars out of Afghanistan for criminals and insurgents, and who had been caught on a wiretap soliciting a bribe.

U.S. law enforcement considered it a test case for prosecuting high-level corruption, Sopko said. “The way it backfired demonstrated not only that the Afghan political commitment to fight corruption was absent, but that the political elite were willing to powerfully resist the U.S. push for accountability.”

“The two scandals made clear that corruption was far more deeply entrenched than the United States had understood,” Sopko said.

It also showed that U.S.-led efforts at Afghan state-building were failing. Sopko quoted then commander of the international coalition in Afghanistan, Gen. John Allen, as concluding in 2013: “Corruption is the existential, strategic threat to Afghanistan.”

Sopko said donor nations could set “smart donor conditions” for assistance, which “can enable Afghan reformers the political ‘top cover’ to implement changes they might not otherwise have been able to implement due to push-back by corrupt political elites.”

As an example, he said the U.S. had made $20 million in aid conditional on government officials declaring their assets.

However, weeding out the corrupt members of the government is not easy, said political analyst Wahid Muzhda.

“When you say to the thief to capture another thief, it is very difficult,” he said.

“They bring in these people from America and abroad, but they don’t really know what’s going on,” Muzhda said. “Corruption is a virus among the Afghan people. No one knows how to fix it.”