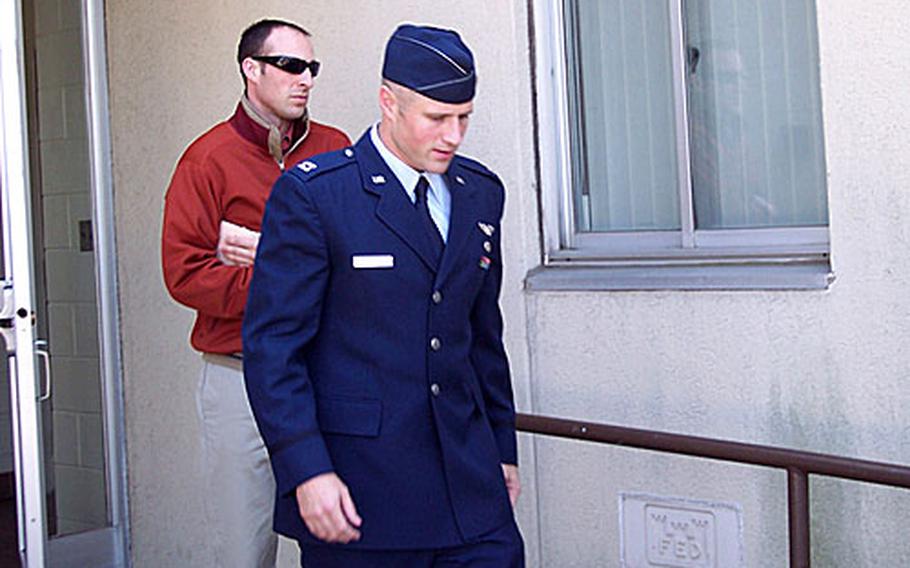 Capt. David T. "Tom" Still, in dress uniform, leaves the courtroom at Kunsan Air Base Wednesday following testimony from one officer who says Still raped her, and another who says he attempted rape. Still pleaded not guilty to the rape charges, but pleaded guilty to having sex with an enlisted female on Tuesday. (Erik Slavin / S&S)

Capt. David T. &#8220;Tom&#8221; Still listened as a female captain, who was a first lieutenant on the date of the alleged April 20, 2006, rape, told the court that Still carried her from his living room recliner to his bed. The female captain said she was fading in and out of intoxicated sleep when she fully awoke to Still reaching underneath her clothes.

Still continued as she grabbed his hips in an attempt to push him off, she said. Afterward, she dressed and returned to her barracks in an agitated state. &#8220;I thought I had done something wrong, that I had deserved this.&#8221; Still&#8217;s defense attorney, retired Lt. Col. Frank Spinner, asked the woman why she had returned to Still&#8217;s room at 2 a.m. after a party there had nearly ended.

Spinner&#8217;s questioning portrayed the woman as someone who preferred to spend her time with Still but had to explain her actions to a major whom she was dating at the time. He also pointed out two notes written by the woman with marker, one of which said, &#8220;I [heart sign] alcohol and Tommy Still.&#8221;

The female captain explained she often has a desire to &#8220;close out a party,&#8221; but that she did not consent to sex. No signs of trauma were found on her body during a medical examination about a day later, according to testimony. However, the woman said she bled from the incident.

Within the next few days, she confronted Still, who told his commander about the incident. After his commander called the judge advocate&#8217;s office, Still spoke with Office of Special Investigations officials. &#8220;He said [the alleged victim] was a really good girl and he trusted her,&#8221; OSI Special Agent Jerome Duhon testified.

Spinner countered that the notes taken by another special agent quoted Still as saying, &#8220;I think something happened.&#8221;

Earlier in the day, a first lieutenant testified that Still had tried to rape her in January. Still and the lieutenant had an understanding that while they could have a physically intimate relationship, there would be no sex, the lieutenant said.

However, after both drank alcohol at a party, Still tried four or five times to have sex with her in his bed, the lieutenant said.

A little more than two weeks after the alleged attempted rape, the lieutenant testified, she and Still did have consensual sex.

The court also heard testimony from a female staff sergeant regarding a drunk-and-disorderly charge against Still.

On the night of Jan. 1, 2006, Still broke an exit sign, placed a lobby sign in the elevator and knocked on doors at the Dragon Hill Lodge at Yongsan Garrison, according to testimony.

On Tuesday, Still pleaded guilty to violating a general order for having sex that same night with the female enlisted soldier.