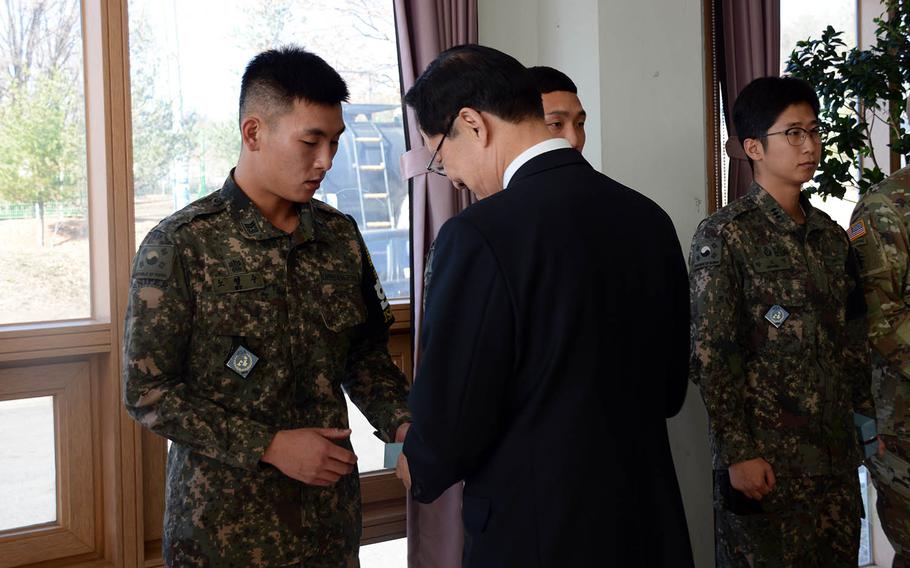 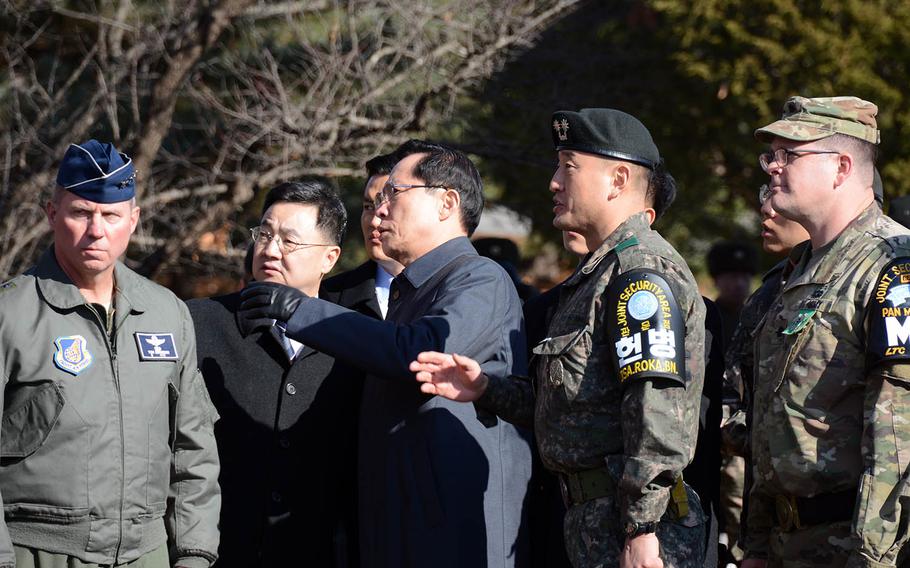 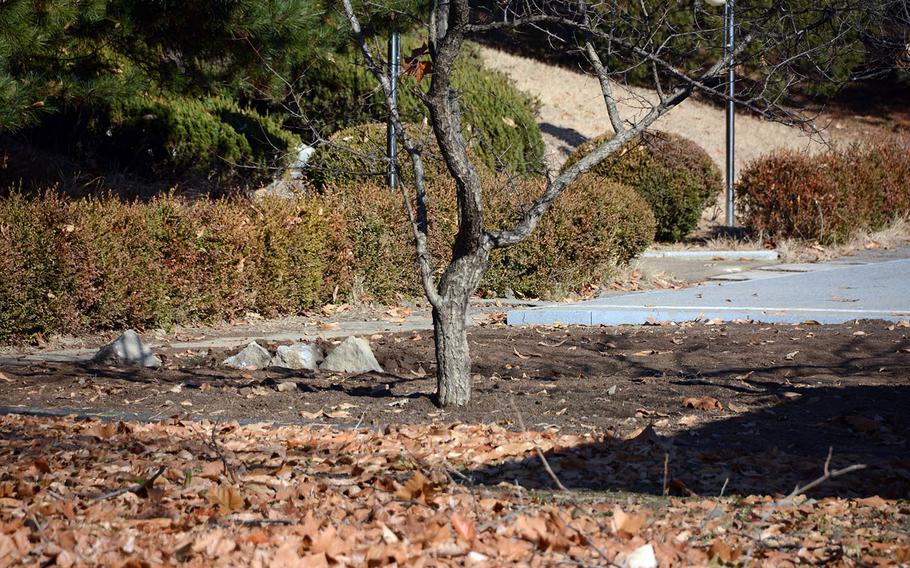 A view of trench apparently freshly dug by North Koreans to prevent more defections after a soldier fled to the South in the jointly patrolled area of the Demilitarized Zone, Monday, Nov. 27, 2017. (Kim Gamel/Stars and Stripes) 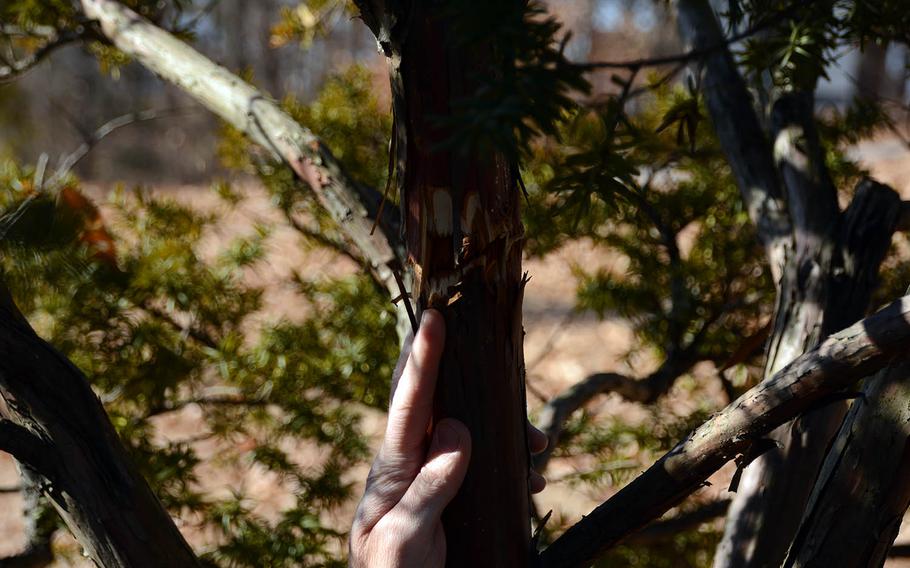 An officer shows a tree that was hit by a bullet fired by North Korean soldiers trying to stop a defector from escaping to the South in the jointly patrolled area of the Demilitarized Zone, Monday, Nov. 27, 2017. (Kim Gamel/Stars and Stripes) 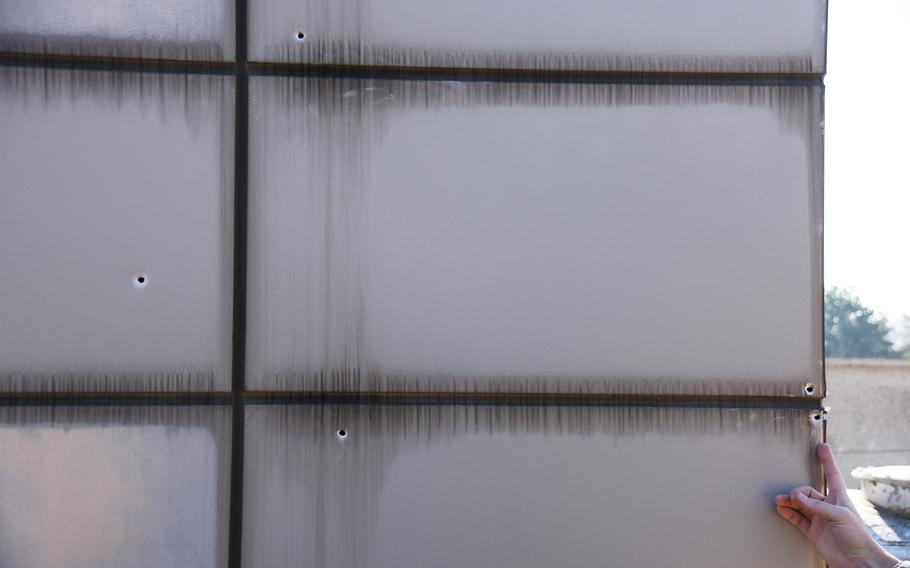 An officer points out bullet holes from weapons fired by North Korean soldiers trying to stop a defector from escaping to the South in the jointly patrolled area of the Demilitarized Zone, Monday, Nov. 27, 2017. (Kim Gamel/Stars and Stripes) 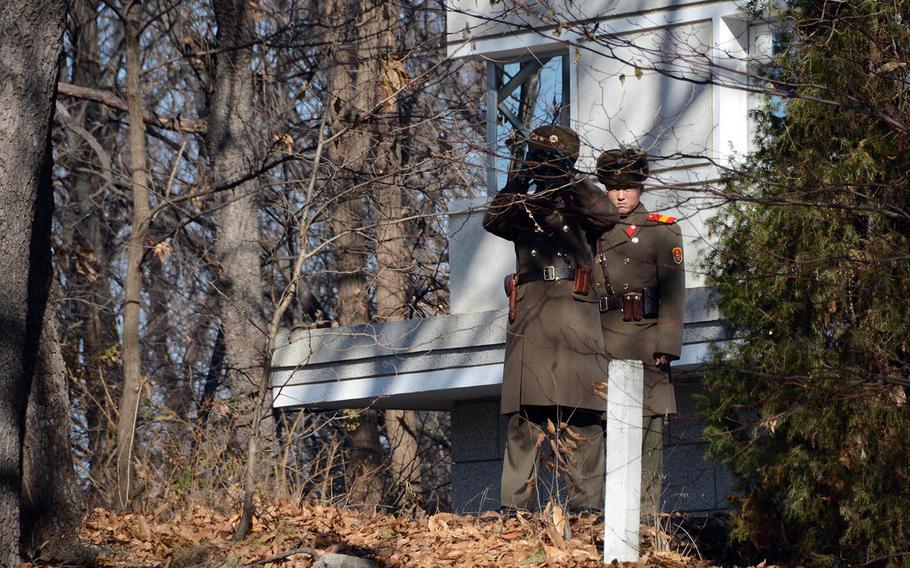 North Korean soldiers film visitors on the South Korean side of the jointly patrolled area of the Demilitarized Zone, Monday, Nov. 27, 2017. (Kim Gamel/Stars and Stripes)

PANMUNJOM, South Korea — A United Nations Command officer used a bullhorn to broadcast a message about armistice violations across the Demilitarized Zone to North Korea but as of Monday the communist state has not responded to a request for a meeting to discuss the allegations.

The UNC, which oversees the jointly patrolled area in the Demilitarized Zone that divides the peninsula, announced on Nov. 22 that an investigation found the North Koreans had violated the truce that ended the 1950-53 war by firing across the border and in one case briefly crossing it in pursuit of a soldier who was defecting.

It also released a dramatic video last week that shows the military jeep racing along a road until it got stuck in a ditch, prompting the fleeing soldier to jump out and run to the South while his former comrades shot at him with automatic rifles and handguns.

The defection occurred as tensions are already sky high over the North’s nuclear weapons program, following a series of missile launches and its sixth and most powerful nuclear test on Sept. 3.

Navy Lt. Cmdr. Daniel McShane, of the UNC Military Armistice Commission, said he and a Korean translator relayed the findings and a request for a meeting six times in both languages to North Korean guards on the other side of the Military Demarcation Line.

“We did it through the bullhorn in the rain,” he told Stars and Stripes, adding there has been no response. “To my knowledge they haven’t acknowledged this event at all other than the initial firing.”

McShane and the translator initially read it to the North Korean soldiers three times, then went inside. But the North Koreans signaled with a flashlight that they wanted a repeat for video so the duo went outside again and repeated the message three more times, he said.

“We were about 30 feet from the MDL and they came up to 10 feet,” he said, adding that’s the usual mode of communicating with the North Koreans since the communist state suspended use of a hotline.

“We have a phone in our office, but they’re not answering,” he said.

The rare glimpse of communications in the Joint Security Area, the only part of the DMZ where the two sides come face-to-face, came as South Korea’s defense minister warned the North not to repeat the violations during a tour on Monday of the bullet-riddled scene of the Nov. 13 border dash.

North Korean soldiers stood guard on the other side, watching and filming every move.

The 24-year-old defector, who has only been identified by his last name of Oh, was hit at least five times and remains hospitalized. Doctors say his condition has stabilized.

The North Koreans, meanwhile, have dug a trench in an apparent bid to prevent further escapes, and the regime has reportedly replaced all of its soldiers in the jointly patrolled area, the only point in the Demilitarized Zone where troops from both sides face each other.

Evidence of the shooting, which was the first in the Joint Security Area since 1984, was everywhere. Turned-up earth was still fresh on the trench, which McShane said is about 4 ½ feet deep.

Five bullet holes pierced a metal wall on a tower across the street from the row of conference buildings that straddle the MDL. A tree also was hit. McShane said the bullets reached as far as about 200 yards south of the border line and struck windows in a nearby building.

He also said the wounded soldier was initially hard to find because he was not immediately visible on the closed-circuit television footage used to monitor the area and did not respond to calls from the UNC security battalion that had initiated a search.

A thermal imaging camera finally captured his heat signature, allowing two South Korean soldiers to crawl toward him and drag him to safety.

Defense Minister Song Young-moo noted that much of the gunfire came from automatic rifles, which was a breach of the armistice that ended the fighting in 1953 but left the two countries technically in a state of war.

Song also cited the shooting across the border and the temporary crossing by a North Korean soldier.

“A situation like this must not happen again,” Song said, standing near the wall where South Korean soldiers found the defector bleeding in a pile of leaves.

He also praised the U.S. and South Korean security forces who rescued the defector but didn’t return fire, which officials have said was critical in preventing an escalation in hostilities.

“The cool-headed judgment of the situation and measures of the U.S. and South Korean security battalion leaders in the urgent and dangerous situation was very appropriate,” he said.