Off-road enthusiast is buggy about his pet project 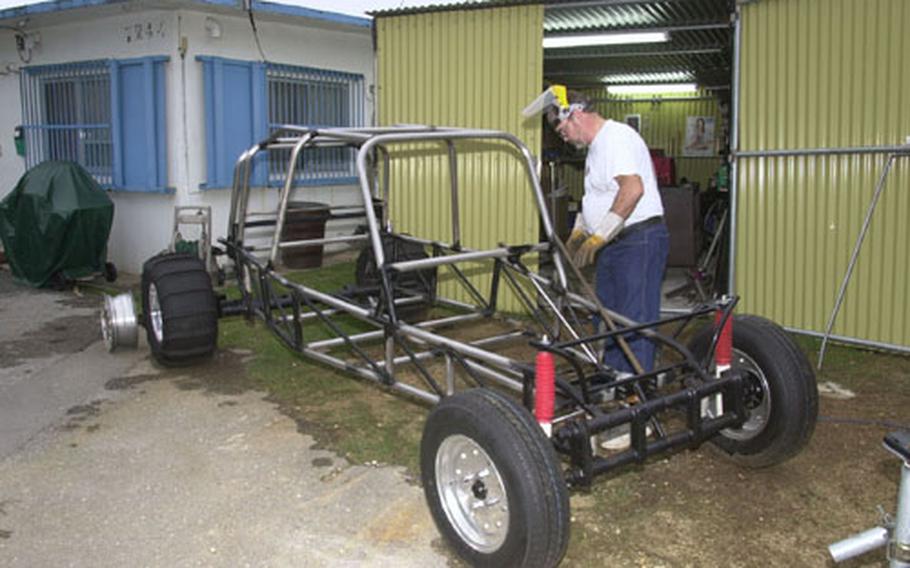 Kurt Lusso, a civilian contractor on Kadena Air Base, attaches a specially-fit tube onto the frame of a dune buggy, one of two off-road vehicles he&#39;s building in his spare time. (Mark Oliva / S&S)

KADENA AIR BASE, Okinawa &#8212; Kurt Lusso spends his days keeping some of the Air Force&#8217;s biggest jets in the sky. But his true passion rides about 6 inches off the ground.

Lusso&#8217;s passion for mechanics spurred him to continue tinkering with cars. His first dune buggies were built in the United States.

Lusso&#8217;s now the site manager at Kadena, working on corrosion control for KC-135s. But after he arrived from Tinker Air Force Base in Oklahoma City, he was dismayed to think his passion might be left in the garage.

Then Lusso ran into a friend who shared his enthusiasm for building buggies. His idea admittedly is low-tech.

But Lusso&#8217;s been doing this sort of thing long enough that a first pile of straight tube already resembles the mean lines of an aggressive off-road vehicle.

That and a few specialized tools that couldn&#8217;t be found on Okinawa. Lusso got hold of a tube-bender and had his son ship his welder.

The constant metal-grinding and flying sparks are drawing some attention. Neighbors, both American and Japanese, peer over fences and from balconies to watch the dune buggies take shape. But Lusso doesn&#8217;t mind the attention &#8212; just the opposite.

Lusso&#8217;s got high hopes for his rides, too. Once he&#8217;s done building the buggies, he&#8217;s going to take them apart again for a run through the paint shop at the end of January. Another month or so later, and with a total initial investment estimated to be about $5,000, he&#8217;ll be ready for the off-road.

The other half is getting behind the wheel. But that&#8217;s harder for him to see, he admits.