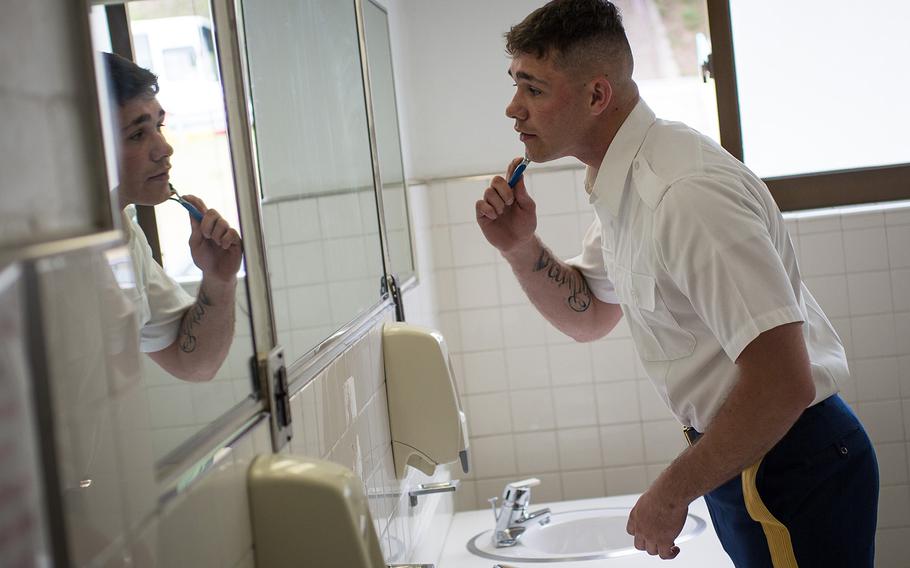 A soldier assigned to the U.N Honor Guard shaves before a ceremony at Yongsan Garrison, South Korea, June 11, 2017. (Marcus Fichtl/Stars and Stripes)

CAMP HUMPHREYS, South Korea — Off-duty soldiers on the Korean Peninsula are now allowed to grow facial hair, wear earrings, put on hats indoors and even turn them backwards or sideways under changes to Eighth Army rules.

“In the past, we’ve been more restrictive in four areas of appearance of our soldiers in order to keep a strong alliance here on the ‘pen’ in regards to the cultural norms of the Korean population but [times and trends] have changed,” Eighth Army’s top enlisted adviser, Command Sgt. Maj. Richard Merritt, said in the statement.

Spc. Isiah Dawkins, an African-American soldier serving with the 339th Quartermaster Company at Camp Humphreys, said the changes will give troops’ faces a much needed break.

“A lot of people have problems with shaving; everyone’s skin is different, everyone’s hair is different,” said the 25-year-old from Columbus, Ohio, who uses medications to shave to Army standards.

“I think it’s a huge morale boost for the lower enlisted guys especially,” said the 34-year-old from Marquette, Mich. “I think they respect the decision that they are treated as an adult.”

Maj. Benjamen Perry, a lawyer at Camp Humphreys, applauded the change on Tuesday, calling it a “move in the right direction.”

“This is a prime example of common sense prevailing,” said the 41-year-old from Washington state. “When I first got here last summer I thought it was asinine [to be clean shaven], regardless of whether we were on pass, on leave, or at the house.”

The next item on troops’ wish list is a change to curfew policy, Perry said. All troops in South Korea area required to be on base or in their homes between the hours of 1 a.m. and 5 a.m.

“Curfew policy, I think, makes criminals out of a lot of honest people,” he said. “It ruins some careers that shouldn’t have otherwise been ruined.”