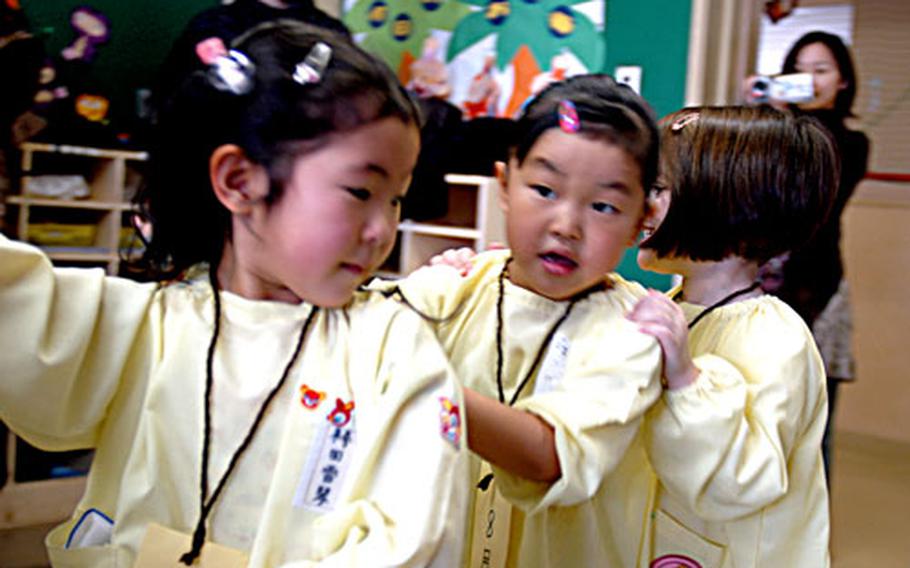 Julia Sanders, center, and Madaline Stephens, play a game during a recent Parent&#39;s Day at Daiichi Yochien, a private, Japanese kindergarten in Misawa city in northern Japan. Julia and Madaline are among a handful of American students attending the school. Their parents, who either live or work at Misawa Air Base, chose an off-base preschool program for the language and cultural experience. (Jennifer H. Svan / S&S)

Julia Sanders, center, and Madaline Stephens, play a game during a recent Parent&#39;s Day at Daiichi Yochien, a private, Japanese kindergarten in Misawa city in northern Japan. Julia and Madaline are among a handful of American students attending the school. Their parents, who either live or work at Misawa Air Base, chose an off-base preschool program for the language and cultural experience. (Jennifer H. Svan / S&S) 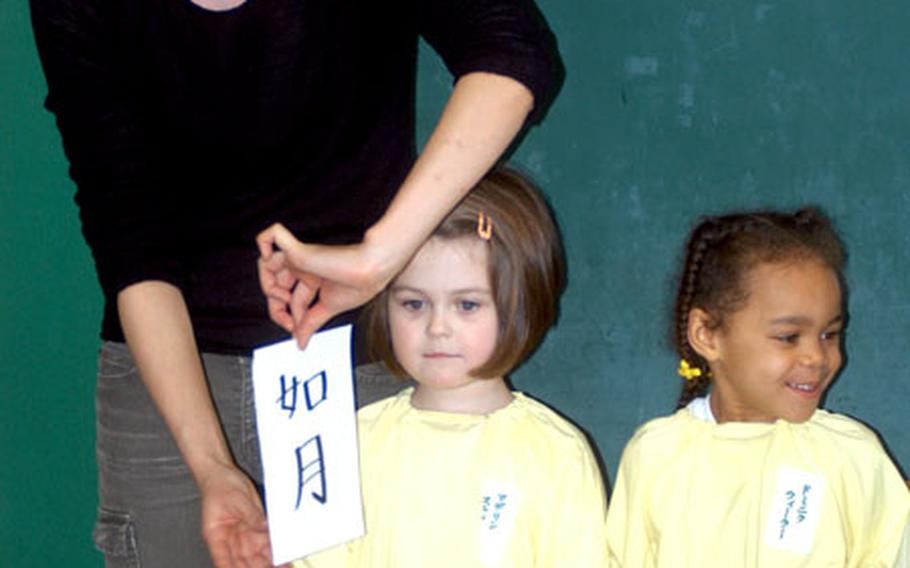 Having attended a British school as a child, Trish Reams had no qualms about sending her daughter to a private, off-base preschool when her family transferred to Misawa Air Base, Japan, several years ago.

The base child development center had a waiting list for her child&#8217;s age group. Reams, a Navy spouse and civilian employee, wanted her daughter exposed to Japan&#8217;s culture and language.

For working parents at U.S. military bases in Japan, Okinawa and South Korea, off-base day care offers an alternative to limited on-base child-care choices. Some parents embrace the system&#8217;s cultural and educational opportunities; others find it a necessity given the 38,000-space shortage at Defense Department child development and school-age centers worldwide.

Parents who choose an off-base program often must contend with different languages, standards and fees. They say it requires research, commitment and planning. Parents may have to find a baby sitter on Japanese or South Korean national holidays, for instance, or get into the habit of sending their child to preschool with steamed rice and a neatly pressed uniform.

But many who&#8217;ve tested the system say the extra work is worth it.

Base child-care officials in Japan and South Korea say they don&#8217;t track how many parents opt for off-base child care, but more parents appear to do so in Japan, where families are more likely to accompany servicemembers, making the need for child care more pressing.

At two international day-care centers with a combined 174 slots near Seoul, for example, just four children with status-of-forces-agreement privileges were enrolled recently.

Finding the right center can be a challenge in either country.

Military child-care officials say they can&#8217;t recommend off-base centers because they&#8217;re not U.S. government-regulated, and they adhere to different standards. But some bases are making more of an effort to inform parents interested in off-base child care.

Sollars Elementary School teachers Heather Sanders and Kathy Michael learned of Daiichi Yochien in Misawa by word of mouth. Michael placed Hannah, now 4, at the preschool because at the time, staff turnover on base left her daughter feeling insecure, she said.

For Sanders, the draw was a second language.

Sasebo Naval Base spouse Renee Penn sent her daughter to Japanese kindergarten at age 3 because &#8220;she was bored to death&#8221; at the base CDC, she said.

Parents such as Sherri Light, a Misawa civilian employee, chose an American-run off-base day-care center for her two daughters in part because she wanted them in a more structured learning environment.

Light said she was told because CDC providers are not &#8220;certified teachers, they cannot teach, whereas off base they don&#8217;t have to follow those rules.&#8221;

DOD child development centers are accredited by the National Association for the Education of Young Children, which states it promotes child-initiated, teacher-supported play as an essential component of developmentally appropriate practice.

Deborah VanNierop, a Misawa civilian employee and dependent spouse, has two children at the base&#8217;s Yoiko CDC: Ben, 1, and Amanda, 4.

Some off-base day-care programs also promote learning philosophies similar to DOD&#8217;s. At Zenrinen, a private day-care center in Yokosuka City near Tokyo, children aren&#8217;t forced to sit at desks and study, said director Kazuko Uchiyama, but rather they learn through playing and social interaction.

Some programs focus more on character building. At Starters day-care center in Yongsan, South Korea, the emphasis is on developing children&#8217;s leadership abilities, while respecting individual characteristics and focusing on multicultural education, said the head of the school, Kim Kyong-ok.

Character development also underpins the Buddhist teachings at Kawashimo Yochien near MCAS Iwakuni, where about 25 children out of 94 students are SOFA status, school officials said. Despite its curriculum, the school throws a Christmas party every year, and also celebrates Halloween and holds a doll festival. Field trips to dig potatoes, hunt for acorns and to parks are numerous.

The program at Okinawa&#8217;s East West Montessori School, for children ages 2 to 6&#189;, is structured, but not in the traditional sense, said school director Aiko Fujita.

&#8220;It follows the child&#8217;s natural desire for learning,&#8221; she said, explaining that children choose which activities they want to pursue. Lessons are interactive and hands-on, meant to develop the mind, senses and sense of self. The alphabet, for example, is introduced in the form of sandpaper letters.

Maria Montessori, who developed the Montessori method about 100 years ago, equated putting children in desks to pinning down a butterfly, Fujita said.

&#8220;Children need to touch things; they need to experience it for themselves,&#8221; Fujita said.

At Daiichi Yochien, students sit in desks to read and write hiragana and some kanji. Daiichi&#8217;s founders believe the practice strengthens students&#8217; concentration and stimulates their imagination, said Daiichi employee Miyuki Takada. Art and music also are incorporated into the day and teachers stress the importance of good posture.

Stephanie Bullard, who teaches second grade at Misawa&#8217;s Sollars Elementary School, chose Daiichi for daughter Nia, 5, because &#8220;as a parent, I can never get on board with the play-all-day syndrome.&#8230; My attitude is, if you challenge a child at a young age and give them opportunities to challenge themselves, they&#8217;ll be &#8230; better off when it&#8217;s time for a real school setting.&#8221;

Off-base day care almost always requires American parents and children to make some adjustments. Most obviously, parents said, language differences can be challenging, even though they usually can be overcome.

Sanders said &#8220;getting all the notes translated, knowing what&#8217;s going on in a timely manner,&#8221; is a challenge at her daughter&#8217;s school. A weekly newsletter provides important dates in English, she said, but not the lunch menu and updates on what the children did that week.

At Daiichi, parents are asked to find a translator in case of emergency or trouble to avoid miscommunication with school officials, said the school&#8217;s Takada. At the same time, teachers and staff make efforts to help American students assimilate into the school and Japanese culture. If a child has problems getting used to the kindergarten, the school will contact parents and explain the situation through a translator, Takada said.

Differences between the American and Japanese school systems can create some problems. In Japan, for example, children in class are expected to do the same activities, which may seem extreme for some American parents, Takada said. Also American parents sometimes question how the kindergarten is run, which Japanese parents seldom do.

Parents said Japanese kindergarten is a big commitment for both parents and child. At Daiichi, parents must volunteer at school functions such as Sports Day, host a home visit from the teacher and make an effort to learn some Japanese.

Reams goes to great lengths to prepare a special Japanese box lunch, or obento, for Emily every Wednesday, the day all mothers prepare elaborate lunches for their children.

Parents with children off base also give up the convenience and peace of mind that comes with knowing their child is nearby in a CDC.

For Light, on-base dance, gymnastics and ballet lessons mean an extra commute to pick up her kids.

And the school year in Japan starts in April, in South Korea in March. Japanese and South Korean national holidays do not coincide with U.S. ones.

Parents either must find a baby sitter or take leave to cover the days their children are out of school.

Her daughter took about six weeks to start learning Japanese. &#8220;When Julia would get upset, the teacher would carry her around on her back after school,&#8221; she said.

Hae-rym Hwang contributed to this report.