Off-base burglary from vehicles an ongoing problem for Americans 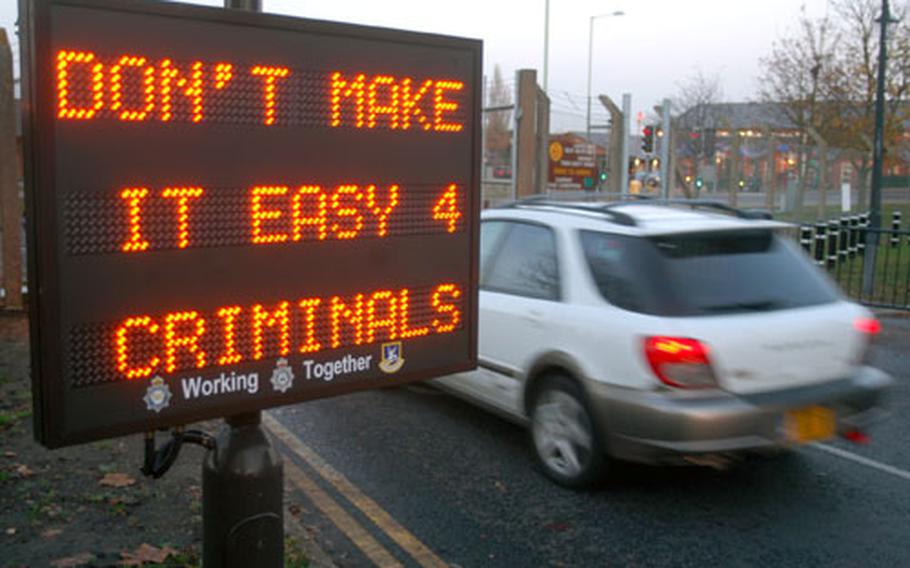 Cars leaving RAF Mildenhall pass a safety sign warning base personnel to beware of thieves off base. Thefts of property from U.S.-registered vehicles parked in communities near the air bases have increased slightly this year. (Sean Kimmons / S&S)

Over the past year, thieves have continued to prey on vehicles belonging to U.S. Air Force personnel living in and around the towns of Mildenhall, Lakenheath and Brandon, British police say.

Whether it&#8217;s the perseverance of thieves or negligence of their victims, one thing is certain: Americans have fallen victim to roughly one-third of the area&#8217;s vehicle break-ins for the past two years.

Since November 2005, there have been about 100 thefts from vehicles belonging to Air Force base personnel in what the Suffolk Constabulary calls the Mildenhall sector, according to Heather Highton, a crime reduction officer for the constabulary. A total of 323 incidents occurred in that sector in that time period, Highton said.

Between November 2004 and November 2005, base personnel reported approximately 85 thefts from vehicles in the sector, where there were a total of 262 incidents, Highton wrote in an e-mail to Stars and Stripes.

She did not give a specific reason for the increase in incidents this year, but said that residents &#8220;should always remain vigilant whether the figures are up or down.&#8221;

To those who suffer the outcome of a broken window and/or stolen property, theft can be an unsettling experience, Air Force officials said.

Besides electronic equipment and CDs, many of the stolen items are costly military gear such as uniforms, Gore-Tex coats and chemical suits that at times have been taken from the trunks of vehicles, said Staff Sgt. Alberto Castillo, RAF Lakenheath&#8217;s crime prevention officer.

Castillo admits that there has been an ongoing problem with airmen leaving valuables in their cars visible to thieves.

When airmen first arrive at Lakenheath, they receive a security brief about the dangers of burglary off base and tips on how to avoid becoming a victim, Castillo said. There also are signs posted at some of the bases&#8217; exits that inform base personnel not to leave their doors unlocked or windows open.

Crime tips also are regularly featured in Lakenheath&#8217;s base publication, Jet 48, to help keep people aware of their surroundings. Yet it seems that no matter what security measures are seen on bases, there are some people who won&#8217;t learn until they become a target.

The jurisdiction of the Air Force security forces doesn&#8217;t extend off base, but they do occasionally conduct joint patrols with British counterparts as part of their crime prevention programs. Usually done in theft hot spots, authorities walk past vehicles to make sure there are no valuables inside and a pink base registration card isn&#8217;t on display.

If authorities do spot a potential problem, they either leave a reminder on the car telling the owner to secure his personal property or send a notice to the airman&#8217;s unit, Castillo said. The notice to the unit, usually made through the first sergeant, is meant also as a reminder, not a reprimand, he said.

He said he wasn&#8217;t aware of anyone who has tried to use a stolen registration card to enter Lakenheath. A military identification card also needs to be shown to enter the base.

Castillo reminds personnel living off base to report crimes to local authorities as well as the security forces. Doing this helps authorities concentrate on crime hot spots.

How to protect your vehicle from thieves

To keep tabs on prominent crime in the local area, register on Suffolk&#8217;s Neighborhood Watch program Web site. Once registered, residents receive newsletters on the latest crime incidents in their area via e-mail.

Registration is simple and can be done at: http://www.police.uk/services/mb/default.asp.

On top of these useful online services, one should always practice crime prevention. Here are some tips provided by RAF Lakenheath&#8217;s 48th Security Forces Squadron: