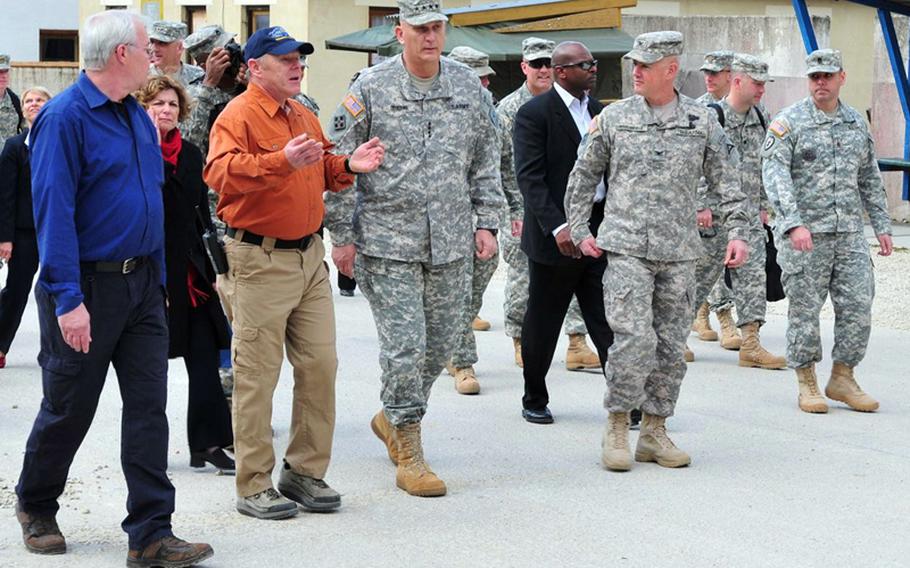 GRAFENW&Ouml;HR, Germany &mdash; The Army&rsquo;s chief of staff is touring several commands and installations in Europe, among them the training area and garrison at Grafenw&ouml;hr, which is scheduled to lose a combat brigade as part of a larger reduction of forces on the continent.

Gen. Ray Odierno also held a town hall meeting Tuesday in Wiesbaden, one of two speaking engagements scheduled for the trip, which will end later this week, according to a spokeswoman for the general, Lt. Col. Lisa Garcia. Odierno was in Paris on Wednesday, where he was scheduled to speak at a military college and meet with his French counterpart.

He visited the Hohenfels Training Area on Tuesday and is scheduled to meet V Corps leaders as the unit concludes its predeployment training in Grafenw&ouml;hr.

V Corps, which is slated to deploy to Afghanistan later this year, will be inactivated when that deployment ends, Pentagon officials have said.

Garcia characterized the meetings as a routine function of Odierno&rsquo;s position.

&ldquo;His main role as the chief of staff of the Army is the outreach officer,&rdquo; Garcia said. &ldquo;This is part of his job &mdash; traveling around, checking on the installations, our commanders and troops, and seeing how things are going.&rdquo;

The visit comes as the Army plans to shrink its footprint in Europe, removing two of its four combat brigades &mdash; or some 7,600 soldiers &mdash; in the next two years. Meanwhile, some members of Congress are calling for additional drawdowns on the continent before they&rsquo;ll consider cuts to U.S. installations, another element of Defense Department changes.

As part of his visit, Odierno toured Grafenw&ouml;hr, home to several battalions of the 172nd Separate Infantry Brigade, one of the two combat brigades to be inactivated under the plans. The brigade is expected to leave around October 2013. The 170th Infantry Brigade Combat Team in Baumholder is scheduled to inactivate this October.

&ldquo;He&rsquo;s more in the receive mode,&rdquo; Garcia said of Odierno. &ldquo;Just getting feedback from the commanders, talking to the soldiers and visiting the V Corps (training event).&rdquo;

His visit comes one month after Sgt. Maj. of the Army Raymond Chandler III conducted a series of town hall meetings in several of Europe&rsquo;s installations.

The crowd listened to the general touch on the future of the Army, including planned cuts of 80,000 soldiers over the next six years. He then accepted questions from the audience.

&ldquo;The part that surprised me is he hit hard that the drawdown is going to take five years and natural attrition was going to handle the brunt of it, whereas from what I&rsquo;ve read, Sgt. Maj. of the Army Chandler makes it seem like they&rsquo;re going to actively pursue putting out people who may or may not want to stay in,&rdquo; said the Wiesbaden-based Sgt. 1st Class Vido Barina, 2nd Military Intelligence Battalion, 66th MI Brigade.