Odierno takes over for Petraeus in Iraq 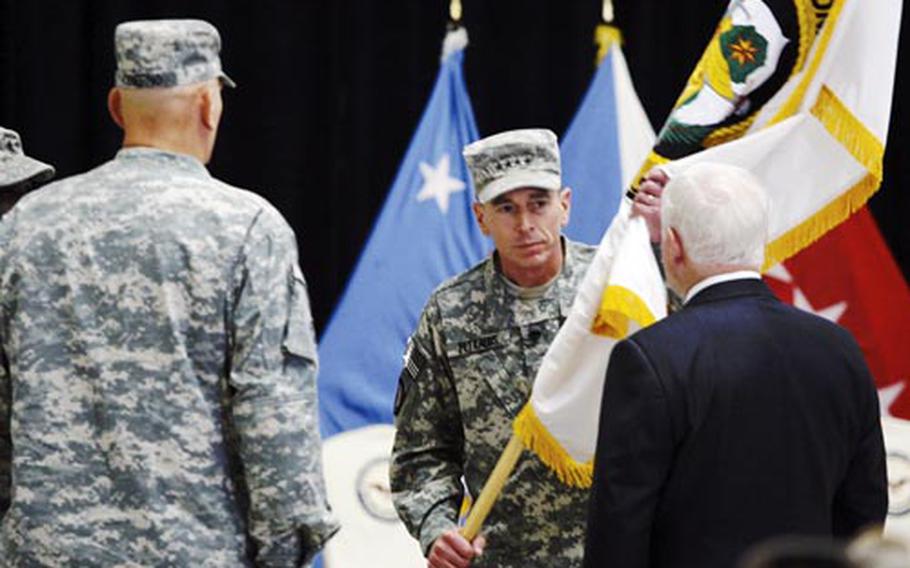 BAGHDAD &#8212; Gen. Raymond Odierno assumed command of the war effort in Iraq on Tuesday, saying that future troop withdrawals would be heavily influenced by a new U.S. administration and the long-term security pact with Iraq still under negotiation.

Odierno, who added his fourth star just hours before the ceremony in Baghdad&#8217;s Al Faw Palace, said of the past 18 months&#8217; gains in Iraq, "where chaos reigned, hope prevails."

But, he warned, "our work here is far from done."

Gates, who arrived in Baghdad on Monday, again said that the "end game" in Iraq was at hand.

"The darkness has receded. Hope has returned," he said during the ceremony.

In the past 18 months, coalition and Iraqi forces under Petraeus &#8212; and Odierno, as the day-to-day commander of operations through earlier this year &#8212; had dealt the insurgency and al-Qaida in Iraq a "tremendous, if not mortal, blow," Gates said.

But as with the other speakers on Tuesday, he advised caution and warned that tough days still lie ahead.

In a brief news conference after the ceremony, Odierno said the security gains were encouraging, but that several key issues remained to be solved, including the Status of Forces Agreement; the fate of nearly 100,000 "Sons of Iraq" who need to be integrated into official security forces and other jobs; and Iraq&#8217;s upcoming provincial and national elections.

"We are in a fragile state now, but what I want to do is get to a stable state," Odierno said. "I think we&#8217;re in the process of doing it. It just takes some time. I am encouraged by the continued growth of not only the Iraqi security forces and National Police, but also, we are starting to see signs of some other governmental capacities beginning to grow, which I think is extremely important."

Odierno commanded the 4th Infantry Division here in the year after the 2003 invasion. And from December 2007 to February 2008, he was the second-highest ranking general in country and ran Multi-National Corps &#8212; Iraq.

Son hurt in IraqOdierno has felt the personal toll of the war as well. In 2004, his son, Tony, then an Army captain, lost most of his left arm in a rocket-propelled grenade attack in Baghdad. The soldier driving the vehicle was killed in the attack.

Odierno, 53, grew up in Rockaway, N.J., and graduated from West Point in 1976. He earned master&#8217;s degrees from North Carolina State and the Naval War College, in nuclear effects engineering and national security and strategy.

Sometimes referred to jokingly as "Tony Soprano," Odierno provides a stark physical contrast to Petraeus. While the latter is lean and of average height, and often described as professorial, Odierno is well over 6 feet tall, built like a football lineman and sports a cleanly shaven head.

Odierno had been criticized, by journalists and some fellow military commanders, for the aggressive tactics his troops undertook early in the war in the Sunni hotbeds surrounding Tikrit and Samarra. Special Forces and conventional troops under his command captured Saddam Hussein in late 2003, though his troops were also faulted for heavy use of artillery and mortars, along with mass round-ups that inflamed the insurgency, according to accounts attributed to follow-on commanders.

But observers also say he was out in front of the push to change the strategy in the war. Even when he served as the No. 2 general in Iraq under Gen. George Casey Jr., who was in charge of the war for nearly three years, Odierno was pushing for more troops and a focus on counterinsurgency.

When Casey was replaced by Petraeus, Odierno found a strategic soul mate.

"Great commanders often come in pairs," Frederick W. Kagan, a military scholar at the conservative American Enterprise Institute and an early proponent of the "surge," wrote this spring in The Weekly Standard. It would be a mistake, Kagan and others say, to underestimate what Odierno did in actually putting into effect the new strategies in Iraq.

Even if a large U.S. withdrawal doesn&#8217;t occur, Odierno will be expected to plan and be prepared for a major drawdown of troops, said Brig. Gen. Joseph Anderson, who was Odierno&#8217;s chief of staff at Multi-National Corps &#8212; Iraq.

Among the decisions: How and where the remaining U.S. forces in Iraq would be used.

"That&#8217;s going to be a dialogue between himself and the (MNC-I) commander, based on where in the country the priorities would have to be placed," Anderson said.

Anderson said that Odierno&#8217;s work in enabling the so-called "Sons of Iraq" &#8212; many former insurgents &#8212; to join forces with the coalition proved that Odierno can be flexible as conditions change.

"Allowing them to join arms with you instead of against you, and the fact that he explored that possibility and set the conditions to be successful &#8212; there&#8217;s probably no greater example of (Odierno&#8217;s adaptability)," Anderson said.

Others who have served with both generals say Petraeus will give Odierno room to put his own stamp on the war.

"[Petraeus] will respect Odierno&#8217;s prerogatives," said Pete Mansoor, a retired Army colonel who has served under both men, and who was Petraeus&#8217; executive officer in Iraq. "Over the course of the year, they built up a great deal of trust and confidence."

In April 2007, Odierno wrote an op-ed piece for the Los Angeles Times, defending the use of extensive barriers and concrete walls in Baghdad.

"Progress comes at different times, and sometimes when it is least expected," he wrote. "We must be patient. As soon as conditions are more stable, I&#8217;m sure the government will lift the curfew, replace or remove the barriers and reduce the number of checkpoints around the city."

That day is largely still to come.