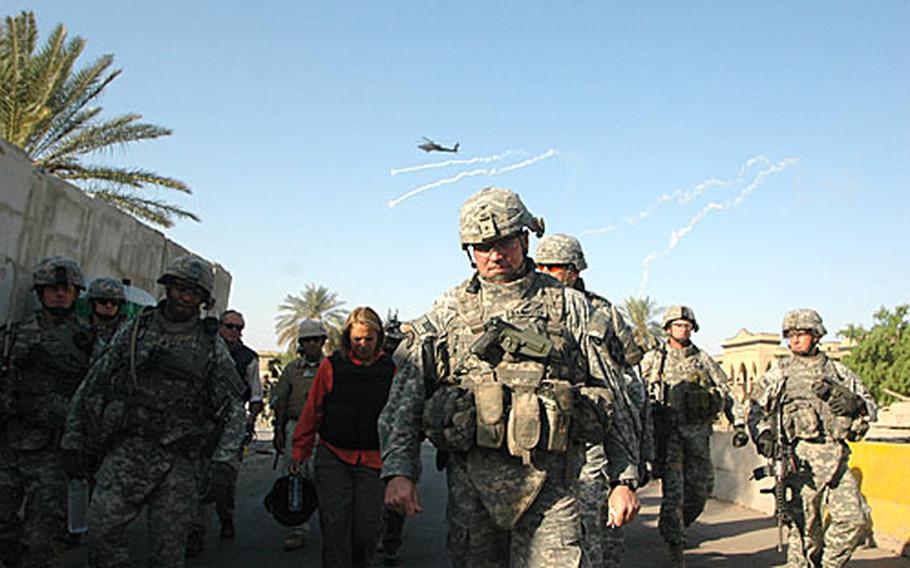 BAGHDAD &#8212; As top U.S. officials in Iraq prepare their progress report to Congress, the second-highest ranking general in Iraq said on Sunday he felt security had improved over the last three months.

CBS News anchor Katie Couric, in Iraq for the first time, was among a small group of journalists accompanying Odierno.

&#8220;I would say that it is clear to us that security is definitely improving,&#8221; Odierno said while walking through one of the oldest sections of Baghdad where street vendors hawk new and old books from all over the world. &#8220;We&#8217;ve now had 12 consecutive weeks of increased security, based on all of the statistics that we measure &#8212; countrywide, and also in Baghdad.&#8221;

He said the matrix was based on the number of incidents, the number of civilian and coalition security-force casualties, and the total number of roadside and vehicle bombs.

Newly reported data on Iraqi civilian deaths in August show the number falling in the capital, but increasing 20 percent since July across the country, The New York Times reported on Sunday.

The Iraqi government, and its leader, Prime Minister Nouri al-Maliki, has come under increasing scrutiny recently, with politicians, diplomats and academics from inside and outside of Iraq claiming it has no real power, which leaves rogue elements like al-Qaida and the Mahdi Army, amongst others, free to carry out terrorist acts and making the job on U.S. military forces that much tougher.

But Odierno is hopeful. He wants leaders like Muqtada al-Sadr, who heads up a radical Shiite movement including the Mahdi Army, to join the central Iraqi government.

Al-Sadr ordered his Mahdi Army to stand down for six months on Wednesday. Odierno believes the cleric is re-grouping.

The backdrop of Odierno&#8217;s visit on Mutannabi Street, just off the east banks of the Tigris River in the Rusafa District, was seen as symbolic. It was devastated on March 5 after an insurgent car bombing left scores dead and buildings reduced to rubble, effectively cutting off the commerce the book market brought to the area.

Since then, efforts to revive the languishing commercial street have been regenerated to a degree through increased security and an injection of cash.

Several shopkeepers and street vendors voiced their discontent over security, saying business was down 50 percent since the bombing. Another said that the Iraqi government didn&#8217;t do anything to help them.