Odierno: More troops in Afghanistan may get pink slips 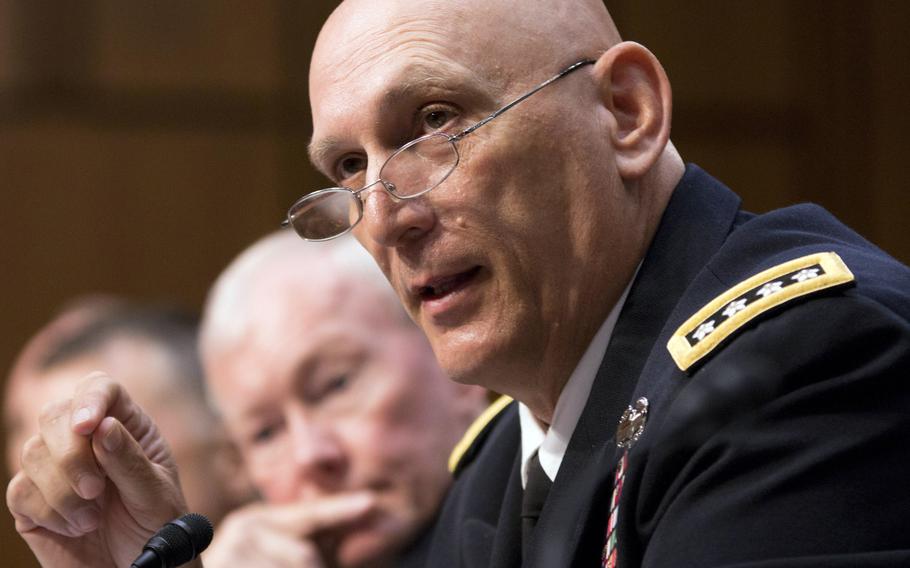 WASHINGTON — More soldiers could learn while in Afghanistan that they are being forced out of the military, the Army’s top officer said Friday.

Army chief of staff Gen. Ray Odierno discussed the cuts with reporters Friday at a breakfast in Washington.

The notifications, part of an effort to rapidly shrink the size of the ground forces, have drawn heavy criticism from lawmakers. In June, more than 1,100 Army captains were notified that their military careers would soon end. It was later revealed that 48 were serving in Afghanistan when they were informed that they were getting the ax.

“The men and women deployed overseas have left their homes and families to fight for our country,” Rep. Tom Cotton, R-Ark., said in a written statement in July. “It’s deplorable the Obama administration would treat them this way.”

More separation notifications went out to 550 Army majors last month, and early retirement boards for lieutenant colonels and colonels are scheduled next year.

“There may be officers deployed to Afghanistan that get notified,” according to an Army spokeswoman.

Service officials said the moves are unfortunate but necessary as the service is forced to shrink due to budget constraints.

“Unfortunately some people now are being let go that have done a very good job. ... But with the downsizing we no longer can keep them.” Odierno said.

Odierno noted that the Army is expected to have soldiers in Afghanistan for another two years, and some of them could get the boot.

He suggested that it’s better to notify soldiers as soon as possible, even if it means doing so while they’re in a warzone. “I don’t want ... them to find out from somebody else” he said.

Under the current system, a general officer in the soldier’s chain of command gives the selected servicemember the news and discusses their options.

According to Army officials, deployed troops who receive separation notices return home as quickly as possible. For staff officers, that can happen within days, while company commanders and others who wield more authority may need up to 30 days to wrap up their assignments.

Notified servicemembers have nine months to transition out of the active duty Army. Many will have the opportunity to continue serving in the Reserve.

Odierno blamed lawmakers for soldiers losing their jobs. He told reporters that he recently received about 40 letters from members of Congress asking him not to cut soldiers from bases in their districts.

“I wrote back and said the reason I’m taking soldiers out of your installations and out of your state is because of sequestration, not that I want to do it,” he said.

Odierno told reporters that he has “grave concern” about the shrinking size of the Army, and he is reassessing the risks of additional force level cuts in light of crises on multiple continents.

The review will be completed in time to possibly influence the Pentagon’s fiscal 2016 budget request, he said.