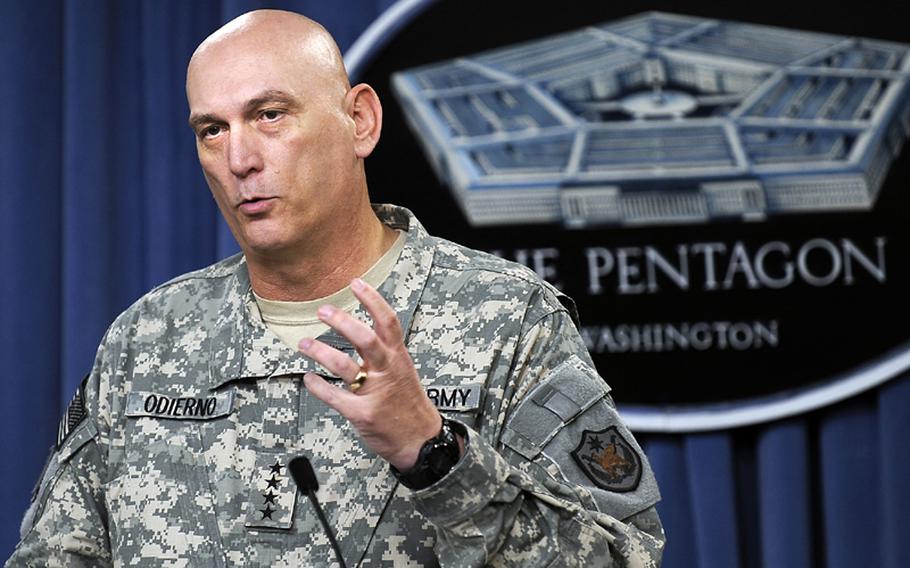 WASHINGTON &mdash; The U.S. is on track to drawdown its force level in Iraq to 50,000 by August 31, as scheduled, but will maintain that robust level through summer 2011, Gen. Ray Odierno, the commander of U.S. forces in Iraq, said Wednesday.

But for the next 17 months, as U.S. forces move toward withdrawing completely by December 31, 2011, per an agreement with the Iraqi government, Odierno has asked his staff to look into shortening remaining deployment times of American units in Iraq to nine months.

The Baghdad staff will work with the Joint Staff and the Army, he said, to see if the change would be &ldquo;a better fit&rdquo; for the timetable.

At a Washington breakfast with defense writers, Odierno also said that U.S. units deployed to Kirkuk would probably be among the last units to come out, given the importance of stability in the north.

Odierno said keeping 50,000 troops in place will help the U.S. Embassy in Baghdad make the transition next year from the military-dominated presence to one that is more military-civilian balanced.

Operation Iraqi Freedom officially ends on August 31, when Operation New Dawn begins, marking a transition from combat operations to stability operations. Currently, there are about 70,000 U.S. servicemembers in Iraq.

As Iraqis work to form a coalition government, the general said, violence in Iraq is at its lowest point of the war, and the number of so-called &ldquo;high profile&rdquo; attacks in the past six months is lower than the same period in 2009.

Additionally, he said, with the killing of Abu Omar al-Baghdadi and other terrorist leaders, &ldquo;the lines have been cut,&rdquo; between al-Qaida in Iraq and the terrorist organization&rsquo;s central operations, hurting their recruiting and communications.

That does not mean the remaining U.S. forces will sit on the sidelines. American troops will continue conducting counterterrorism activities alongside Iraqis, according to the general. And troops still operate in the contested northern areas, which Odierno said was &ldquo;more conflict prevention&rdquo; than combat.

&ldquo;We do not do combat patrols anymore,&rdquo; Odierno said, adding that despite lingering violent bombings, Iraqis show no signs of returning to sectarian fighting.

&ldquo;My definition of combat patrol,&rdquo; he later explained in a Pentagon press conference, &rdquo;is you&rsquo;re going out for a very specific mission to go after a very specific target, or to go and influence some sort of an operation that is ongoing inside of the country. We don&rsquo;t do those.&rdquo;

In recent months, the majority of U.S. troops are operating as embedded advisors in Iraqi forces.

&ldquo;We do no independent operations in Iraq,&rdquo; he said.

Odierno is in Washington for a joint Defense and State Department conference discussing the transition of more than 1,000 tasks currently handled by U.S. Forces-Iraq, he said.

&ldquo;The only way to reduce that level of violence now is through economic growth and job development,&rdquo; he said, &ldquo;... and political movement toward a little bit more reconciliation.&ldquo;Security is not holding us back, anymore.&rdquo;

Odierno has been tapped for promotion as the next head of Joint Forces Command.