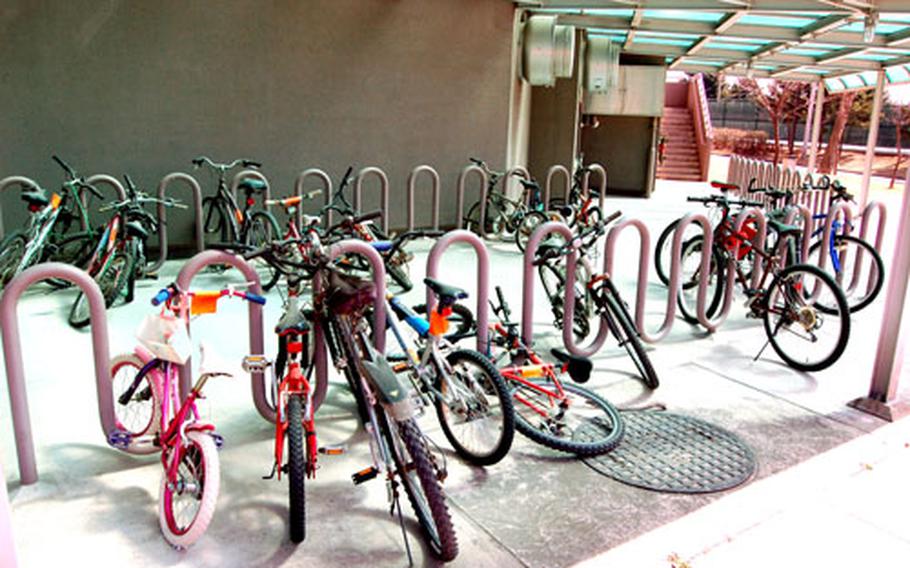 Though only a short distance from the bike rack that was emptied by military police Feb. 11, this bike rack was untouched by the roundup of allegedly abandoned bikes, Burke Towers residents say. (Jimmy Norris / S&S)

SEOUL &#8212; A new bike registration policy is in the works at Yongsan Garrison to make it easier for owners to report missing property and for military police to determine which bicycles have been abandoned.

Garrison commander Col. Dave Hall said the long-planned policy was spurred by events surrounding a mid-February bike roundup by military police at the Burke Towers housing area, which led to several bikes being unaccounted for.

According to Burke Towers resident and former building manager Lt. Col. Kristopher Perry, the trouble started Feb. 6, when he saw military police and a garrison housing office representative putting orange stickers on bikes at a bike rack in front of his building.

The stickers warned owners that the bikes were suspected of being abandoned and that if they didn&#8217;t contact MPs within three days, the bikes would be confiscated.

Perry said he asked if residents would be informed this was happening, and the MP assured him they would.

"We didn&#8217;t do the job right notifying the tenants," Hall said. "The spirit and the intent was good, but the execution went astray."

A second Burke Towers resident, who asked not to be named, said he saw an MP at about 12:30 a.m. Feb. 11 cutting locks and loading bikes onto the back of a flatbed truck.

When the resident confronted the MP, he was told he&#8217;d been ordered to round up the bikes.

Hall said there was nothing suspicious about the late hour in which MPs conducted the roundup and that such operations normally take place during periods of less traffic on post.

"Was there malicious intent? I&#8217;m confident there was not," Hall said.

The resident checked outside later that night and found the bike rack empty and the MP and his truck gone.

He later found out that four of his family&#8217;s bikes were among those that disappeared that night. A bike belonging to Perry&#8217;s son also went missing.

When Perry&#8217;s wife went to military police to reclaim her son&#8217;s bike, Perry said, she was shown to the impound where the confiscated bikes were stored, but found only eight "dilapidated" bikes, none of which belonged to her son.

When she told the MPs her son&#8217;s bike was not there, Perry said, the MPs claimed to have confiscated only eight bikes.

MPs said the bike must have been stolen, Perry said, and the family could file a report "but nothing would come of it." Later he was told he had no recourse because the bike hadn&#8217;t been registered in the computer database used to keep track of the vehicles on post.

Perry and the second resident say more than eight bikes were confiscated.

Perry provided Stars and Stripes with an e-mail from the housing office representative who accompanied military police as they tagged bikes, who estimated at least 12 bikes in the rack at the time.

Perry became more suspicious when he noticed none of the bike racks near the other Burke Towers buildings had been emptied, and a sign on one of them promised cash for bikes.

A call to the phone number on the sign was answered by a recorded message saying it had been suspended.

Garrison spokesman Steve Morgan said bike registration has never been mandatory, but has been available at Yongsan for several years. He said he doesn&#8217;t believe its availability has ever been publicized.

Morgan, who said housing officials and military police did not want to be interviewed on the matter, issued a statement via e-mail Wednesday.

It said military police tagged and confiscated eight bikes in accordance with an Army regulation that allows MPs to confiscate abandoned property.

"Unfortunately, this regulation does not take into consideration the special circumstance of an &#8216;abandoned bicycle,&#8217; e.g., in the winter time bikes are chained up and all but forgotten," the statement said.

It added that under the new bike registration program being developed, owners will receive a decal to display on their bikes "that will make it easier for the MPs to identify which bikes are abandoned and give owners a way of identifying their bikes."

Hall said the program will help prevent similar problems in the future.

"Without it, people will abandon bikes," he said. "Which is how this happened to begin with."