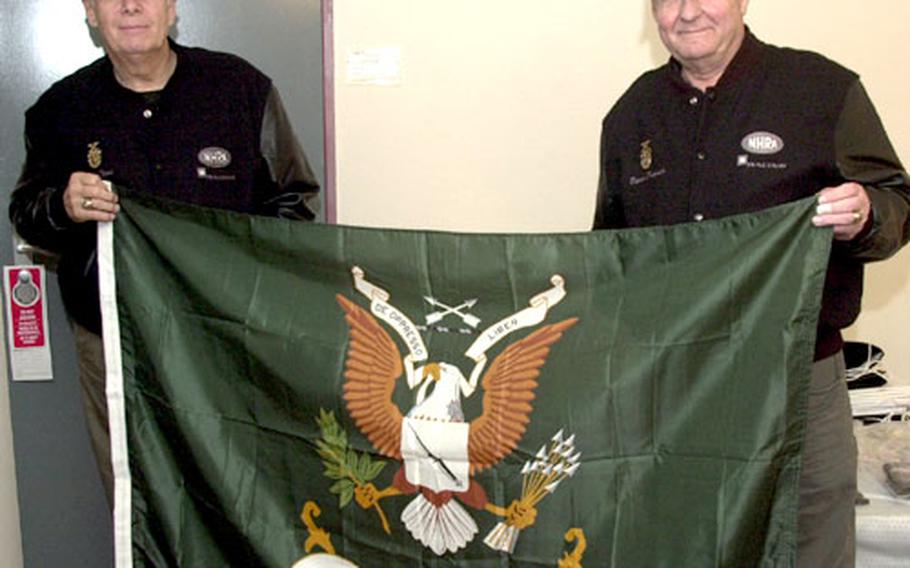 Especially considering the indifferent reception America gave him and others when they returned from Vietnam.

So Reed, from Carlisle, Pa., has used his retiree status to hop on Space-A flights from Dover Air Force Base, Del., and fly 4,000 miles to Ramstein, then travel to Landstuhl Regional Medical Center just to say &#8220;thank you&#8221; in person to wounded troops.

Last Wednesday, Reed, president of The Randall Shughart Chapter of the U.S. Army Special Forces Association, brought along fellow association member Dieter H.B. Protsch, and together they headed for Landstuhl and to Kleber Kaserne, where transitional care patients are billeted.

Laden with thousands of items donated by Fred Simmonds, drag-racing manager for GM Racing Group and a former Army captain, they set up giveaway tables, handing out everything from key fobs to hats and T-shirts. As part of a United Service Organizations-sponsored trip Reed helped organize, top National Hot Rod Association drivers such as Jim Yates, Tommy Johnson Jr., and Cory McClenathan visited troops this week.

Starting with his earliest visits, Reed said, Americans have shown him how much they care by their donations to Special Forces Association fundraisers at the local Moose Lodge, Sam&#8217;s Club (the late Wal-Mart heir John T. Walton was a Special Forces medic and Silver Star recipient) and at his church, St. Bernard Catholic Church, in New Bloomfield, Pa.

Obscured, perhaps, by growing political unease over a seemingly open-ended mission in Iraq, Americans still support the troops, said Reed. Even those who oppose the war, Reed added.

Officials at Landstuhl and at Europe Regional Medical Command concur that support for wounded troops is strong &#8212; sometimes too strong.

&#8220;Americans do care,&#8221; said Marie Shaw, LRMC spokeswoman, and she has a warehouse full of donations to prove it.

However, Americans&#8217; urge to say &#8220;thank you&#8221; in person can be disruptive, as the hospital and even the transitional-care facilities have more requests to visit wounded servicemembers than personnel can handle, Shaw said.

Visits organized through USO, Morale, Welfare and Recreation or other official umbrella organizations are fine, she said. But individuals are discouraged from trying to drop in at Landstuhl, Shaw said, where visitors aren&#8217;t allowed into the wards because of infectious-disease concerns, as well as privacy issues.

Visiting outpatients in transitional care at Kleber Kaserne, on the west side of Kaiserslautern, is different, she said. All visits take time and planning, and the volume of people wanting to visit &#8212; from retirees to congressmen &#8212; is taxing staffs, Landstuhl and regional medical command personnel said.

Shaw said the best way to thank wounded servicemembers for their service is through a donation to Landstuhl&#8217;s chaplain, or to Fisher House, which gives families of wounded personnel a place to stay while they visit.

Reed said his visits as president of the Special Forces association are coordinated through protocol officers, adding that troops at Kleber don&#8217;t seem to get many visitors.

Protsch, 73, a native of Germany whose godfather was Joseph Goebbels, Adolf Hitler&#8217;s chief propagandist, ended up in the U.S. Army, rising to the rank of major before retiring with 20 years&#8217; service.

Neither talks much about Vietnam, though Reed says the treatment Vietnam vets got &#8220;probably served a purpose. People felt so bad they didn&#8217;t want to treat these guys badly.&#8221;

For their part, both men say they try to keep conversation light, only swapping stories if soldiers ask about their war. The last topics recovering troops want to talk about are war, injuries, &#8220;nurses and doctors,&#8221; Protsch said.