Obama: US, Russia share interests in Syria, but backing Assad is 'doomed to fail' 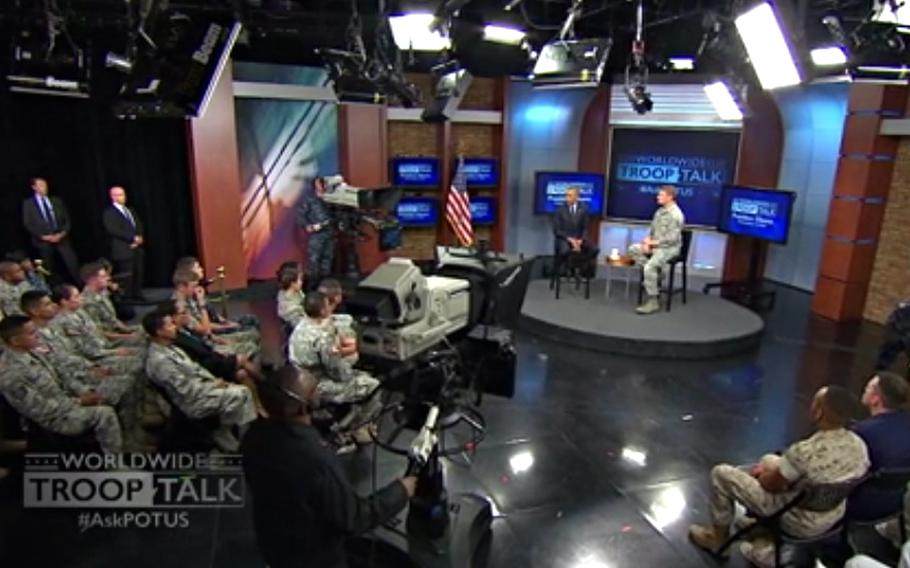 President Barack Obama speaks to servicemembers from around the world during a question-and-answer session Friday, Sept. 11, 2015, from Fort Meade, Md. Among other topics, Obama discussed the crisis in Syria and the U.S.-led coalition’s efforts to fight the Islamic State. (Screen grab from Department of Defense video)

But Obama warned Russia that backing Syrian President Bashar Assad against the rebels is a doomed policy and could ultimately derail any prospects for a peace settlement in the country.

The president spoke about Russian troops entering the country this week during a broadcasted question-and-answer session with troops around the world to mark the 14th anniversary of the 9/11 terror attacks.

“We are going to be engaging Russia to let them know that you can’t continue to double down on a strategy that is doomed to fail,” said Obama during the event. “If they are willing to work with us and a 60-nation coalition we put together, there’s the possibility of a political settlement in which Assad would be transitioned out and a new coalition of moderate, secular and inclusive forces could come together to restore order in the country.”

Russia has long been an ally of Assad and this week was moving ships, aircraft and infantry troops into Syria as the regime struggles with a four-year-old civil war and tenacious Islamic State fighters and other Islamic militants.

Assad has been unable to regain control of vast stretches of his country from rebels despite brutal warfare that has leveled cities, targeted civilians and fueled a refugee crisis in Europe.

“It appears now that Assad is worried enough that he is inviting Russian advisers in and Russian equipment in,” he said.

Meanwhile, the United States has struggled with its own war against the Islamic State in Syria and Iraq. Efforts to train and equip moderate Syrian rebels against the jihadi group have largely failed — proxy troops have quickly been killed or captured — and the effort is now being retooled by the Obama administration.

Russia, led by President Vladimir Putin, is likely to strike against the Islamic State as part of any intervention. But Putin’s forces could also come in conflict with U.S.-allied forces in the complex and long-running civil war.

“The good news is that Russia shares with us a concern about countering violent extremism and shares the view with us that ISIL is very dangerous,” Obama said, using an alternative name for the Islamic State. “So, despite our conflicts with Russia in areas like Ukraine, this is an area of potentially converging interests.”

Any partnership or shared interests between the U.S. and Russia in Syria would have ironic timing. The military has stepped up activity in eastern Europe, Congress has called for arming Ukraine and regional allies are deeply nervous over Russian aggression and its annexation of Crimea last year.

Amid emerging signs of a new Cold War, the newly confirmed chairman of the Joint Chiefs of Staff, Gen. Joseph Dunford, as well as other Pentagon brass have recently called out Russia as the biggest conventional threat to the U.S.

Still, Obama said talks are ongoing and claimed Russia’s military intervention in Syria will not get in the way of the U.S. war effort there. But Putin has been reluctant in the past to bend to American interests when it comes to Assad.

“I remember a conversation I had with Mr. Putin four to five years ago where I told him that was a mistake; it would make things worse as long as he continued to support Assad,” Obama said. “He did not take my warnings, and as a consequence things have gotten worse.”