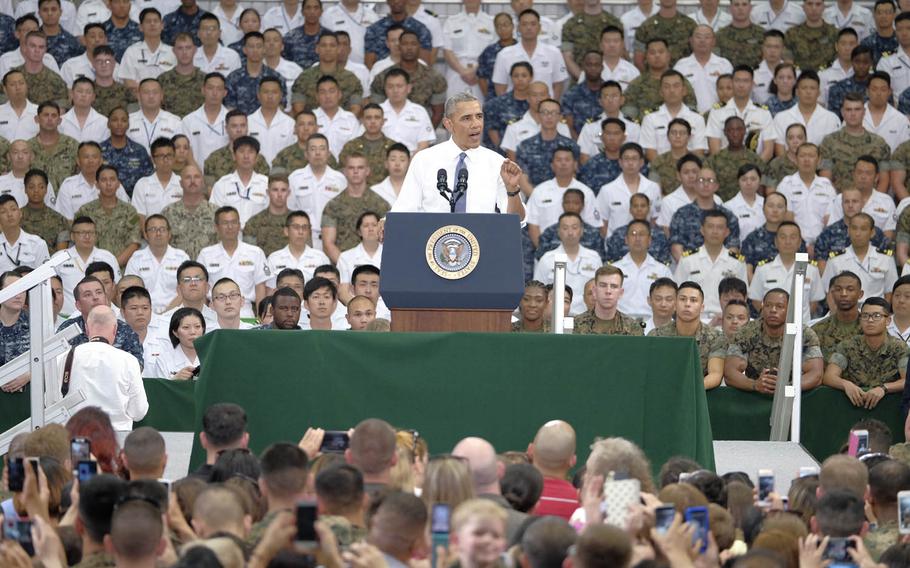 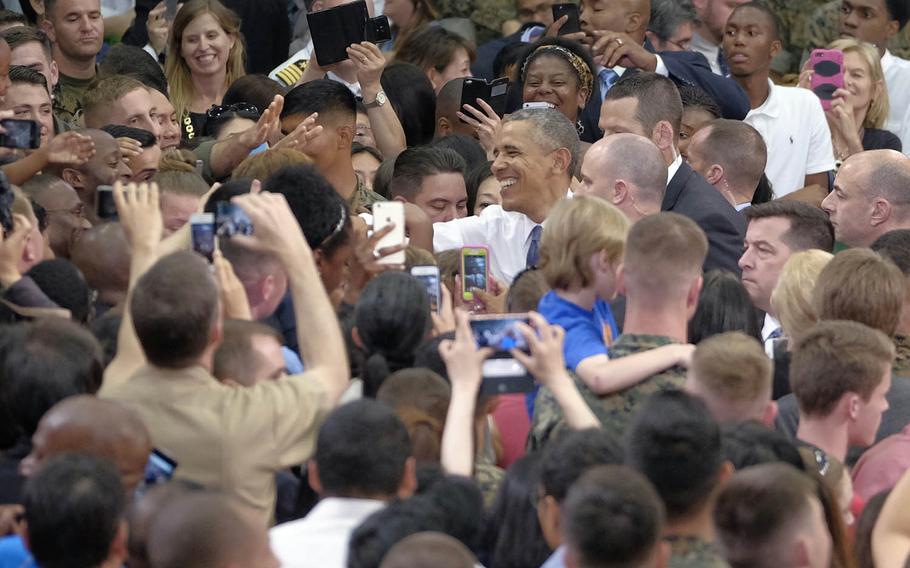 President Barack Obama greets servicemembers and others who attended his speech at Marine Corps Air Station Iwakuni, Japan, Friday, May 27, 2016. Obama spoke about the importance of the U.S.-Japan alliance. (James Kimber/Stars and Stripes)

MARINE CORPS AIR STATION IWAKUNI, Japan — President Barack Obama took a break from a busy day of diplomacy and solemn remembrance to meet with servicemembers at a U.S. Marine base.

A smiling and waving Obama, looking relaxed with his shirt sleeves rolled up on a warm day, was quickly working the crowd like a political rally and seemed to revel in the brief respite in his itinerary.

“I wanna shake as many hands as possible,” he told the cheering American and Japanese troops. “I gotta warn you in advance: No selfies, because then I’ll be here all day.”

The stop in Iwakuni was sandwiched between the end of the G-7 economic summit in Ise-shima and a trip to Hiroshima Peace Memorial Park, where he became the first U.S. president to visit the city devastated by the first nuclear weapon dropped on a populated area.

He also has been dealing with the fallout of a slaying in Okinawa that has fueled anti-base sentiment. A civilian U.S. base worker is under arrest, and Obama heard criticism during a meeting with Japanese Prime Minister Abe before the summit began.

Trying to smooth over the situation, which has led to a tighter curfew and other restrictions for U.S. servicemembers on Okinawa, Obama focused his Iwakuni speech on the U.S. role in the region, including the “Pacific pivot,” and the value of the alliance with Japan.

“As president, I’ve made sure that the United States is leading again in the Asia-Pacific,” he said. “That takes security cooperation. That takes trade agreements, it takes relationships built between people and it takes the proud service of the men and women in uniform throughout the region working with outstanding men and women in the armed forces of Japan.”

Obama, who has made working toward global nuclear arms reduction a recurring theme throughout his presidency, referred to the historic visit to Hiroshima as “an opportunity to honor all who were lost during World War II.”

“It’s a chance to reaffirm our commitment to pursuing the peace and security... And it’s a testament to how even the most painful divides can be bridged. How our two nations, former adversaries, cannot just become partners but become the best of friends and the strongest of allies."

“We see the strength of our alliance on display right here,” he said of Iwakuni. “This place is a powerful example of the trust and the cooperation and the friendship between the United States and Japan. American Marines working side by side with Japanese Self-Defense Forces to protect the peace and engage with our partners throughout the region.”