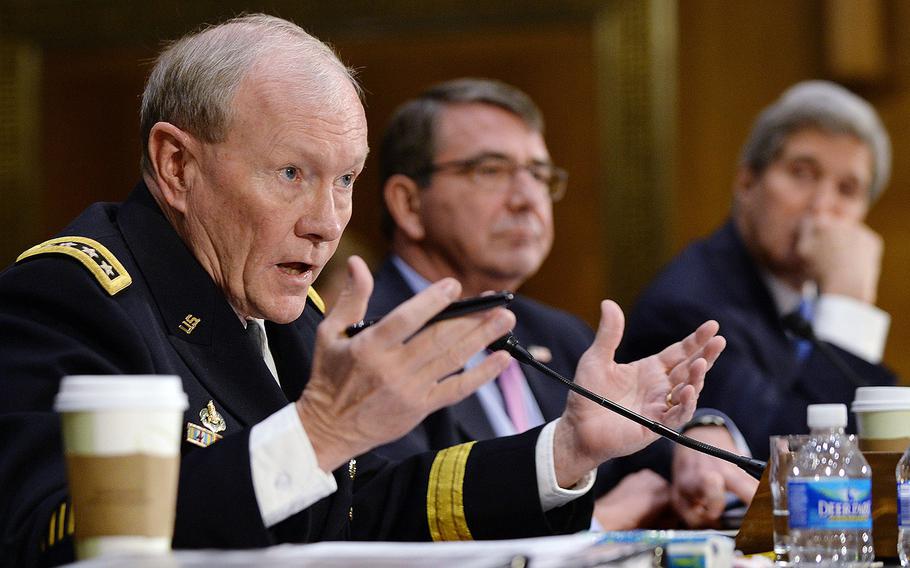 WASHINGTON — High-profile members of the Obama administration told Congress Wednesday that its proposed war authorization would allow the U.S. military to fight Islamic State militants and its allies in Africa and elsewhere, but would not allow for support of proxy forces in Syria, the heart of the campaign.

The testimony by Secretary of State John Kerry, Defense Secretary Ash Carter and Gen. Martin Dempsey, chairman of the Joint Chiefs of Staff, was aimed at shoring up support for the administration’s Authorization for Use of Military Force, but also highlighted what many lawmakers perceive as shortcomings in the draft authorization, which would guide a new global war against the Islamist extremists for the next three years.

“Our nation is strongest when we act together, and we simply cannot allow this collection of murderers and thugs to achieve its ambitions,” Kerry said, noting that the Islamic State militant group has captured land in Iraq and Syria threatening “the death or submission of all who oppose it” and “the incitement of terrorist acts across the globe.”

The administration’s requests for a new authorization has been foundering on Capitol Hill due to doubts on both sides of the aisle over the geographic scope, time frame and whether U.S. ground forces might be used. Foreign Relations Committee chairman Sen. Bob Corker, R-Tenn., called the hearing Wednesday to gauge whether any legislation is possible, saying “we don’t know of a single Democrat” who supports the current proposal.

Corker asked Dempsey whether the proposed authorization for the use of military force provides military support for moderate Syrian rebel groups that will be trained and equipped to fight the Islamic State as part of a key strategic offensive approved by Congress last year. The training is set to begin this month.

“The answer to that is, ‘no,’” he said. The administration has not added a Syrian regime or an Assad component to the AUMF.”

Dempsey, who has backed the proposed war authorization, said the U.S. offensive will likely need to adapt and change tactics over time. He said the main war effort is focused on the Islamic State in Iraq because the U.S. has a credible ally with ground forces.

“We don’t have that credible partner inside Syria yet,” he said. “We are making efforts to build that partner.”

Corker said the United States has a moral obligation to help protect any proxy force, which will almost certainly face aerial bombing by the regime of Syrian President Bashar al-Assad once they take the battlefield.

“So, the president has actually sent us an AUMF that does not protect them from what is coming down the road. I think that is somewhat odd,” he said.

Committee ranking member Sen. Robert Menendez, D-N.J., noted that the Nigerian terror group Boko Haram, responsible for thousands of deaths and attacks on civilians, announced its allegiance to the Islamic State. He asked the administration officials if the U.S. could attack the group under the proposed authorization.

Carter said the White House is requesting wide flexibility to fight the Islamic State, even as it aligns and morphs into other groups around the globe.

He said such groups could be attacked if they meet two requirements — they must pledge allegiance to the Islamic State and pose a direct threat to the United States.

The war of airstrikes and coalition offensives against the Islamic State has been waged since August and President Barack Obama has said he has the legal power to continue without an OK from Congress. But the administration hopes to gird the effort and reassure international partners through an authorization vote.

The White House proposal bars the large-scale “enduring” U.S. ground combat of the type waged in Iraq and Afghanistan, and would sunset in three years, allowing the next administration and Congress to revisit the legislation.