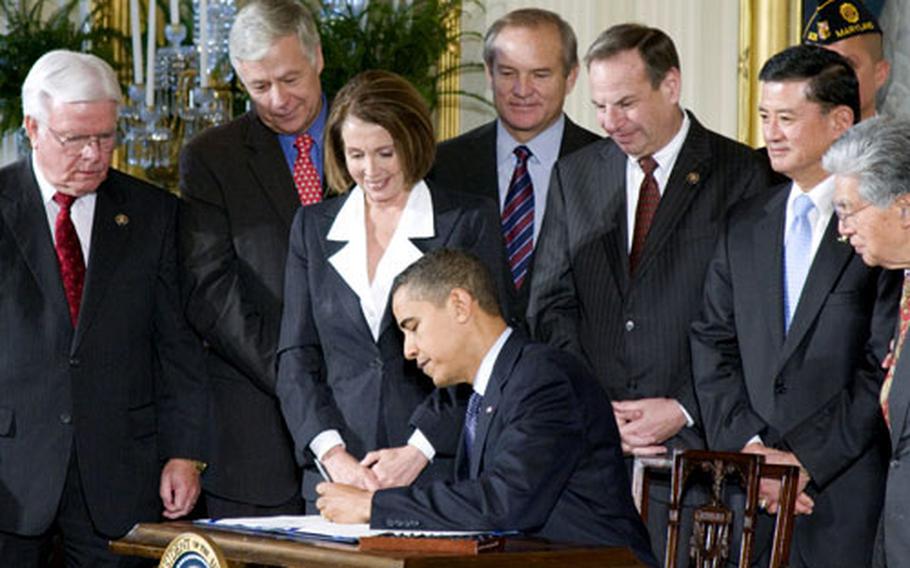 WASHINGTON &#8212; Congress still hasn&#8217;t approved a Veterans Affairs budget for 2010, even though the new fiscal year is already 3 weeks old. But on Thursday the president signed into law nearly half of the department&#8217;s 2011 budget, much to the delight of veterans groups.

The new law, which passed through Congress with near-unanimous support earlier this month, provides advance funding for basic VA medical programs in future fiscal years so they will remain fully functional even if Congress fails to pass a full budget on time.

It&#8217;s a frequent headache: In the last 23 years, a new VA budget has been approved before the start of the new fiscal year (Oct. 1) only three times.

Joe Violante, legislative director for the Disabled American Veterans, said the recurring funding snafu leads to questions about what programs can continue and when construction can begin on new clinics.

Veterans groups made the advance funding issue their top legislative priority this year, and pressured President Barack Obama to keep his campaign promise to make the change to the VA&#8217;s budgeting process. Violante said his group has been pushing for the change for nearly a decade, but Obama&#8217;s emphasis on veterans issues helped pass the measure.

Under the new law, lawmakers will be permitted to approve funds for the VA&#8217;s medical accounts &#8212; things like physicians salaries, maintenance money, research funds &#8212; two years in advance.

Congress is currently considering a $133 billion VA budget for fiscal 2010, and the measure includes another $48 billion in advance funds for 2011. When Obama submits his 2011 budget proposal to lawmakers in February, it&#8217;ll likely include about $50 billion for fiscal 2012.

Retired Vice Adm. Norb Ryan, president of the Military Officers Association of America, called the funding move &#8220;the most important change for the VA in nearly a decade.&#8221;

&#8220;With the pressures of the wars, the issues with veterans health care are only getting tougher,&#8221; he said. &#8220;The VA health system is known for quality and safety but not for efficiency, and one of the main reasons are these fits and starts with the funding. So this will make a tremendous difference.&#8221;

Congress is expected to vote on the fiscal 2010 VA budget in November.