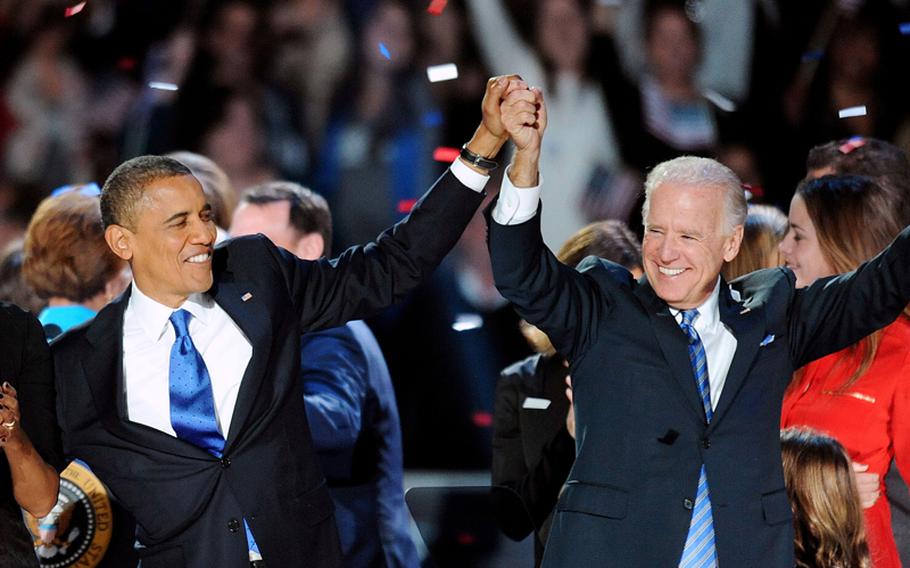 President Barack Obama and Vice President Joe Biden on stage in Chicago after being re-elected to a second term. (Olivier Douliery/Abaca Press/MCT)

President Barack Obama and Vice President Joe Biden on stage in Chicago after being re-elected to a second term. (Olivier Douliery/Abaca Press/MCT) 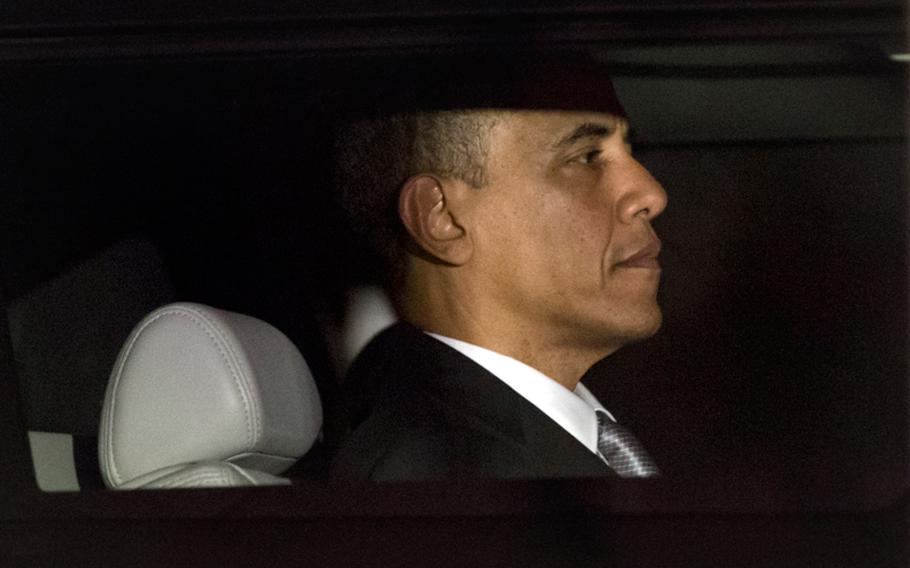 President Barack Obama is seen through the window of a limo as he returns to the White House for the first time since his victory on election day, in Washington, Wednesday, Nov. 7, 2012. (J. Scott Applewhite/AP Photo)

WASHINGTON - Four more years &hellip; of gridlock? Or of hope and change?

America woke up Wednesday morning to a surprisingly decisive re-election victory for President Barack Obama, but also to the reality of a still-divided Congress, a still-fractured electorate and a country still anxious over serious fiscal and ideological battles ahead.

In his victory speech, Obama said he believes in "a tolerant America" and promised again to work to bring harmony to the nation's capital.

"We will disagree, sometimes fiercely, about how to get there," he told a crowd of cheering supporters in Chicago. "By itself, the recognition that we have common hopes and dreams won't end all the gridlock, or solve all our problems, or substitute for the painstaking work of building consensus and making the difficult compromises needed to move this country forward. But that common bond is where we must begin."

Before the president's second inauguration party in January, he'll have to battle with lame-duck lawmakers over how to stave off more than $1 trillion in looming budget cuts. He'll have to handle a host of expiring middle-class tax cuts. He'll have to pull the country back from the often-hyped fiscal cliff before another economic plummet.

And after the inauguration balls mark a glittering end to a brutal campaign season, the two-term president will be tasked with not only governing but establishing his legacy as more than just the first black president.

Obama has promised to balance the budget and pull the country back out of debt. His once far-off goal of a full withdrawal from Afghanistan arrives in just two more years. The signature achievement of his first-term - universal health care - still faces resistance from recalcitrant state leaders and a public skeptical of its value.

Even in his convincing electoral college victory, Obama won only 25 states (and possibly Florida) and barely cracked 50 percent of the popular national vote. Before the presidential election was called, House Speaker John Boehner noted that his Republican congressional caucus was also a decisive victor on Tuesday, and dismissed the idea of momentum for the Democratic president.

"If there is a mandate, it is a mandate for both parties to find common ground and take steps together to help our economy grow and create jobs," he told reporters. "With this vote, the American people have also made clear that there is no mandate for raising tax rates."

Senate Minority Leader Mitch McConnell - whose party still holds enough seats to filibuster any legislation in the upper chamber - was even less gracious in his congratulations to the president.

"The voters have not endorsed the failures or excesses of the President's first term; they have simply given him more time to finish the job they asked him to do together with a Congress that restored balance to Washington after two years of one-party control," he said in a statement.

Levi Russell, spokesman for the conservative political advocacy group Americans for Prosperity, said he sees "no indication" that Obama's re-election will bring him any closer to compromise with Republicans.

Officials from NBC reported that their exit polling showed 52 percent of Americans felt the country is headed in the wrong direction, but enough voters were still willing to give Obama another four years in office to deal with the problems.

Tom Perriello, policy counselor at the left-leaning Center for American Progress, pins that seeming disconnect on the idea that Obama could point to some concrete accomplishments - the auto industry bailout, the affordable health care act, proposals on immigration reform - while the stalemated Congress had little to show for the last two years.

"The last two elections were ones where people were voting against things. This one was about voting for something," he said. "Hopefully, that's the lesson that lawmakers take away from Tuesday."

Under the best-case scenario, the White House and Republican House are able to reach compromise on the growing list of pressing national needs and establish a productive if uneasy working relationship in the next few months.

Under the worst-case scenario, Washington returns to the bitter polemics and frequent government shutdown threats seen in 2011.

Obama closed his victory speech Wednesday by defending his belief that the two parties can work together as more than simply blind optimism.

"We are not as divided as our politics suggest; we're not as cynical as the pundits believe; we are greater than the sum of our individual ambitions; and we remain more than a collection of red states and blue states," the president told his supporters. "We are, and forever will be, the United States of America."

Now, he has four more years to prove that.