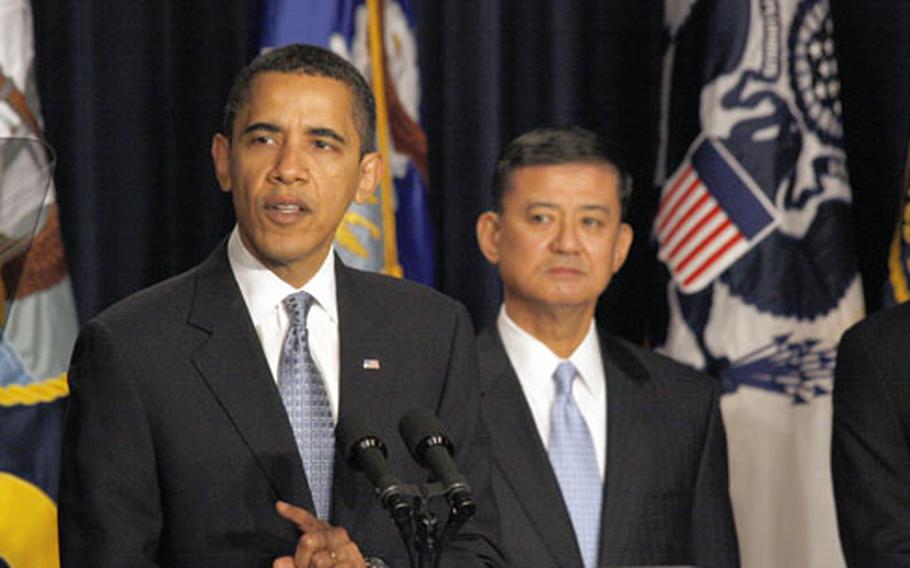 WASHINGTON &#8212; President Barack Obama on Thursday laid out an ambitious agenda to reform veterans benefits, promising a lifelong medical record for all servicemembers and an end to homelessness among veterans.

"For their service and sacrifice, warm words of thanks are more than warranted, but they aren&#8217;t nearly enough," Obama told a crowd of troops and veterans.

"Too many wounded warriors go without the care they need. Too many veterans don&#8217;t receive the support that they&#8217;ve earned. Too many who once wore this nation&#8217;s uniform now sleep in the streets. It&#8217;s time to change all that."

Last week the House and Senate separately approved the president&#8217;s plans for more than $53 billion in discretionary spending for veterans programs in fiscal 2010, an increase of 11.5 percent from last year. The White House has pledged a $25 billion increase in veterans funding over the next five years.

The president&#8217;s announcement Thursday laid out specifics for some of that spending: more money for improved GI Bill benefits, expanded medical coverage for 500,000 veterans, more money for brain injury and stress disorder research, and the establishment of a "unified, lifetime health record" for all servicemembers.

Defense Secretary Robert Gates and Veterans Affairs Secretary Eric Shinseki have already begun work on those records, which would chronicle troops&#8217; entire medical history in a format that both defense clinics and VA physicians could easily access.

Obama said the goal of the new system is simple: "When a member of the Armed Forces separates from the military, he or she will no longer have to walk paperwork from a duty station to a local veterans health center."

That comment drew applause from the assembled groups. Paul Rieckhoff, executive director of Iraq and Afghanistan Veterans of America, said the idea of a single electronic medical record for veterans isn&#8217;t new, but the president&#8217;s commitment to the idea is.

"This is the first time we&#8217;ve had a president sit the secretary of Defense and secretary of Veterans Affairs in a room and tell them to get it done," he said. "This is what we&#8217;ve been waiting for."

Obama did not unveil a time line for implementing the system, but said the departments have already made significant progress on the effort.

Veterans affairs officials said they&#8217;ve had more success with their separate efforts, but still have no reliable way to transfer active-duty records into their system.

Obama also pledged to launch a pilot program with private organizations to help keep veterans from losing their homes and help find housing for those already in trouble. VA officials estimate that up to 154,000 veterans are living on the streets on any given night.

"We will not rest until we reach a day when not one single veteran falls into homelessness."