Obama orders DOD to plan for full withdrawal from Afghanistan 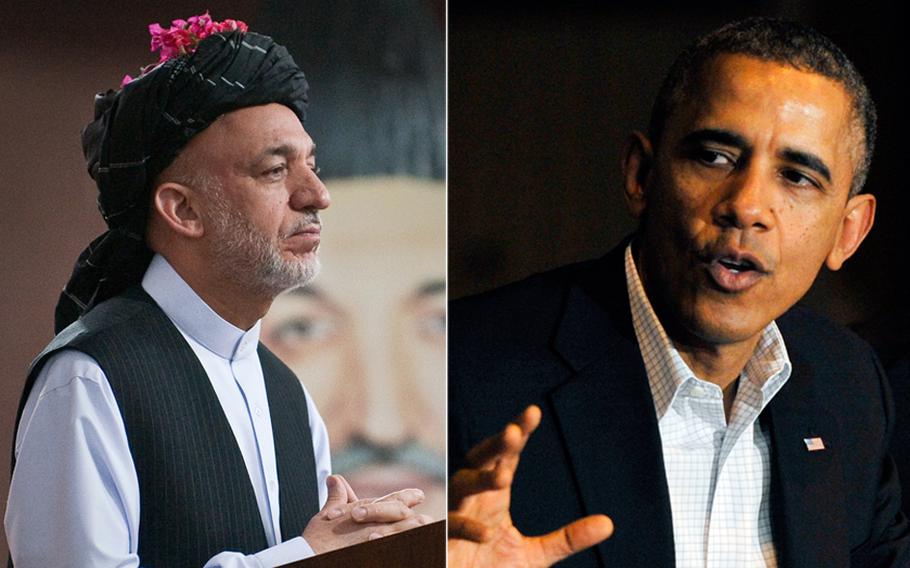 President Barack Obama has ordered the Defense Department to begin planning for a full U.S. troop withdrawal from Afghanistan if a key security agreement between the two countries is not signed, the White House announced Feb. 25, 2014. Afghan President Hamid Karzai has so far refused to sign the agreement. (Photos by Mark O'Donald/U.S. Navy and Eric Paul Zamora, Sacramento Bee/MCT)

WASHINGTON — President Barack Obama has ordered the Defense Department to begin planning for a full U.S. troop withdrawal from Afghanistan if a key security agreement between the two countries is not signed, the White House announced Tuesday.

In a phone call to Afghan president Hamid Karzai, Obama said that United States was still willing to negotiate a limited U.S. troop presence to train Afghan security forces and hunt al-Qaida. That will only happen, however, if Afghanistan signs a bilateral security agreement guaranteeing U.S. troops immunity from the Afghan legal system.

Defense Secretary Chuck Hagel said Tuesday that the DOD would “move ahead with additional contingency planning to ensure adequate plans are in place to accomplish an orderly withdrawal by the end of the year should the United States not keep any troops in Afghanistan after 2014.”

While the “zero option” has been discussed by Obama administration officials and military leaders, this is the first time the DOD has formally been told to develop a plan, and is something of an escalation in the war of words with Karzai.

The U.S. has struggled to get a commitment from Karzai on any international agreements that would guarantee immunity for U.S. troops in Afghan courts for actions taken in pursuit of mission goals. After a council of Afghan elders and local leaders approved such an agreement last November, Karzai shocked the international community by refusing to sign it.

Now is the right time to begin planning for a potential full withdrawal, Hagel said.

“This is a prudent step given that President Karzai has demonstrated that it is unlikely that he will sign the [BSA], which would provide DOD personnel with critical protections and authorities after 2014,” Hagel said in a statement Tuesday. “I appreciate the efforts of [Marine Gen. Joseph Dunford, commander of the International Security Assistance Force] and our military leaders to provide flexibility to the President as we work to determine the future of our presence in Afghanistan.

The White House put out a statement at roughly the same time, recapping the call between President Obama and Karzai, which covered preparations for Afghanistan’s coming elections, and peace and reconciliation efforts, in addition to the Bilateral Security Agreement.

“President Obama told President Karzai that because he has demonstrated that it is unlikely that he will sign the BSA, the United States is moving forward with additional contingency planning,” the statement read. “[T]he longer we go without a BSA, the more likely it will be that any post-2014 U.S. mission will be smaller in scale and ambition.”

Hagel was scheduled to talk Tuesday with airmen and soldiers at two bases in Virginia before flying to Brussels for the 2014 NATO Ministerial, which will “look ahead to the Alliance’s planned new mission to train, advise and assist the Afghan security forces after 2014.”