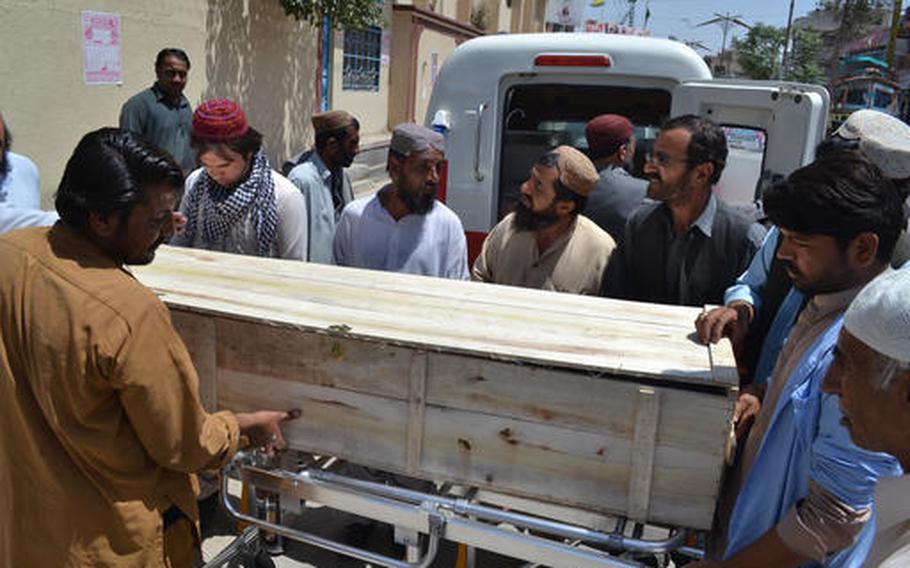 People stand near a coffin carrying a body one of the victims in a reportedly U.S. drone strike in the Ahmad Wal area in Baluchistan province of Pakistan, at a local hospital in Quetta, Pakistan, Sunday, May 22, 2016. A senior commander of the Afghan Taliban confirmed on Sunday that the extremist group's leader, Mullah Mohammad Akhtar Mansour, has been killed in the strike. (Arshad Butt/AP)

“After so many years of conflict, today gives the people of Afghanistan and the region a chance at a different, better future,” he said in a statement issued by the White House.

Afghan President Ashraf Ghani and Chief Executive Abdullah Abdullah also hailed the strike, describing Mansour as responsible for a sharp escalation in bloodshed and an obstacle to a negotiated peace.

Obama thanked members of the U.S. military and intelligence community and said they “have once again sent a clear message to all those who target our people and our partners — you will have no safe haven.” He also called on Pakistan, where the strike occurred, to deny terrorists sanctuary.

The strike came as Islamabad faced mounting pressure from U.S. and Afghan officials to take action against insurgent groups after months of failed attempts to bring the Taliban to the negotiating table. Saturday’s incident, believed to be the first American strike on an area considered a Taliban sanctuary along Pakistan’s border with Afghanistan, may be a sign Washington is growing tired of waiting.

Western intelligence agencies have long believed that after the U.S.-led invasion that overthrew the Taliban regime in 2001, former members of that government and its military found refuge in the Pakistani border town of Quetta and that many remain there and in the port city of Karachi.

In a statement Sunday, Pakistan’s Foreign Ministry said it learned of the strike only after it occurred. It called the incident a violation of its sovereignty, an issue it said has been raised with U.S. officials in the past.

On Monday, Capt. Jeff Davis, a Pentagon spokesman, would not say whether Pakistani officials were notified before this specific strike. However, he did say the United States and Pakistan have had ongoing conversations about Mansour and other targets the U.S. is tracking.

Davis also said the airstrike was defensive, a response to specific information that Mansour was plotting attacks on U.S. and coalition personnel, though he would not elaborate.

Davis said the U.S. rules of engagement allow airstrikes in a variety of situations, including attacks against al-Qaida or Islamic State group targets and to defend key territory from being overrun by enemy combatants.

Davis said he was not certain whether Saturday’s strike represented the first time that the United States authorized a defensive strike in Pakistan.

In the past, Pakistan has rejected U.S. and Afghan claims that it harbors insurgents. But Islamabad has refused to crack down militarily on the Afghan Taliban on its soil, arguing instead that peace talks were “the only viable option for lasting peace in Afghanistan.”

But Kabul has grown impatient with Islamabad after the latter failed to bring the Taliban to the negotiating table. After a massive suicide bomb attack killed nearly 70 people and injured hundreds more in Kabul on April 19, which some officials suggested was planned in Pakistan, Ghani said he would no longer seek Islamabad’s help to woo the Taliban.

Several U.S. and Afghan officials have claimed Mansour was the key obstacle to the peace process and posed a threat to U.S. forces in Afghanistan, a message Obama repeated Monday. The president is currently in Vietnam and will travel to Japan for this week’s G7 Summit.

The strike on Mansour, he said, “removed the leader” who had rejected Kabul’s efforts at negotiating a peaceful end the conflict and led an organization that “continued to plot against and unleash attacks on American and coalition forces, to wage war against the Afghan people and align itself with extremist groups like al-Qaida.”

The president urged the Taliban to “seize the opportunity to pursue the only real path for ending this long conflict – joining the Afghan government in a reconciliation process that leads to lasting peace and stability.”

Obama’s remarks came as NATO Secretary-General Jens Stoltenberg issued a statement saying Mansour’s Taliban had caused the death and suffering of countless civilians and posed “a major daily threat to the forces of the US and other NATO Allies and partners.”

Stoltenberg reiterated the international coalition’s commitment to its train-advise-assist mission in Afghanistan to ensure the country will not again become a safe haven for terrorists.

“This is the time for Afghans to talk to Afghans, so that Afghanistan can develop in peace and security,” Stoltenberg said.