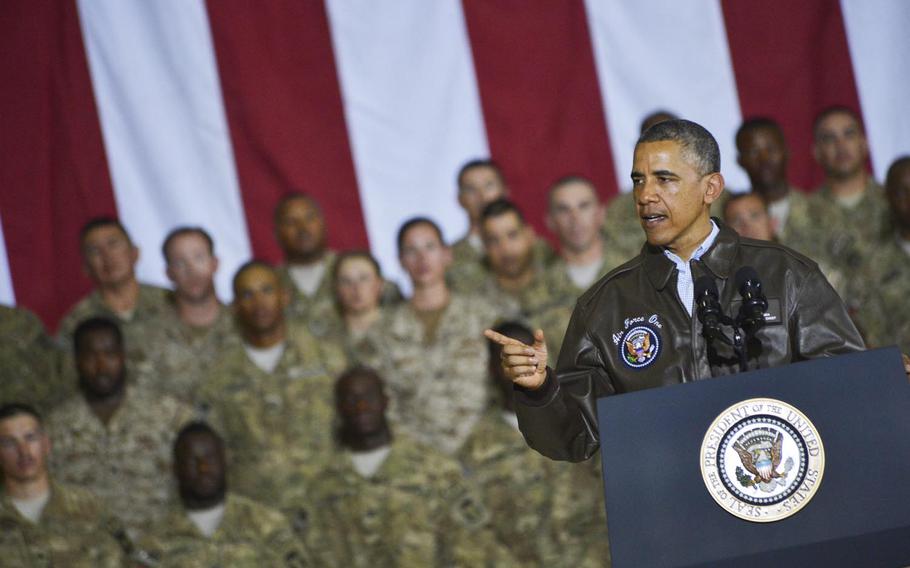 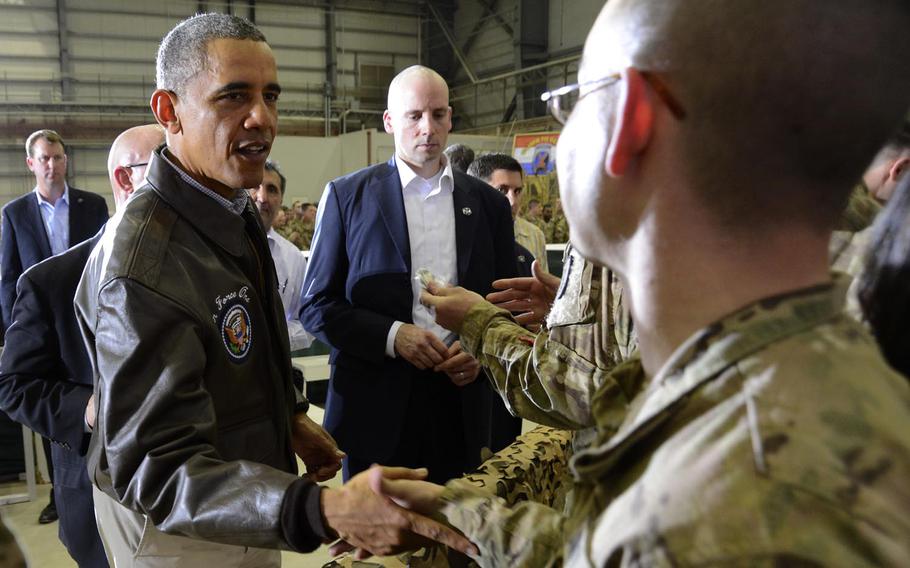 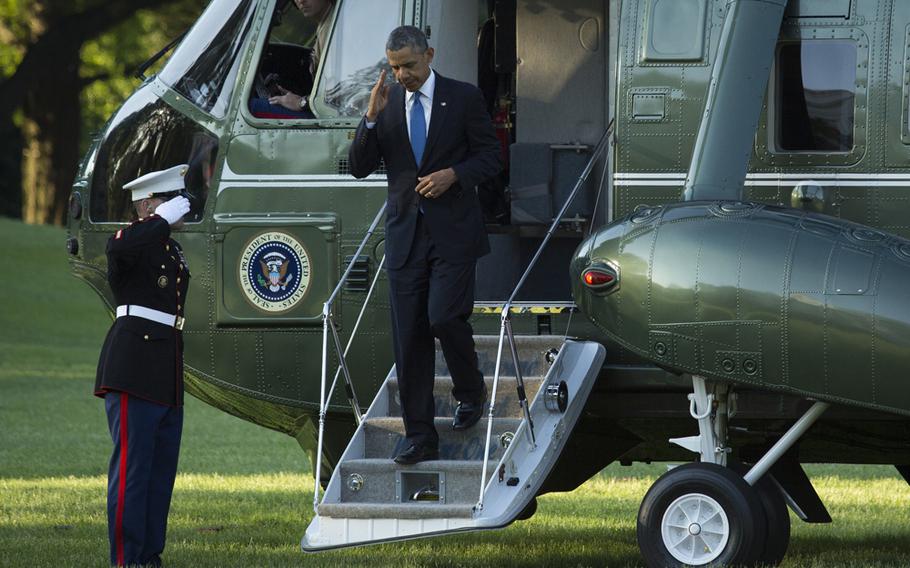 U.S. President Barack Obama descends from Marine One onto the South Lawn at the White House, in Washington, D.C. on May 26, 2014. On Sunday, President Obama made a surprise visit to Afghanistan to visit U.S. troops at Bagram Air Field. (Pool photo by Drew Angerer/SIPA/Abaca Press/MCT)

WASHINGTON — President Barack Obama chose one of the few political paths open to him Tuesday when he announced plans to draw down U.S. forces in Afghanistan to 9,800 by the end of the year — picking an option that satisfies public desire to end the war without immediately abandoning the troubled country after years of blood and sacrifice.

The president has long promised to end a war that many Americans no longer support after 13 years.

He is also clearly mindful of the criticism that the U.S. departure from Iraq in 2011 was too quick, a charge that has stuck as that country now faces an armed challenge from al-Qaida and other insurgents.

ANALYSIS: Troops in Afghanistan, by the numbers Choosing to keep 9,800 troops on the ground at least for another year puts an official period at the end of the story of America’s military role in Afghanistan while maintaining a commitment to a country where more than 2,100 U.S. troops died.

His decision is part of a broader effort to redirect U.S. foreign policy away from the wars after 9/11 while continuing counter-terrorism operations against al-Qaida in Asia, the Middle East and Africa.

“The bottom line is there is time to turn the page in a decade where so much of our foreign policy was focused on the wars in Afghanistan and Iraq,” Obama said Tuesday.

RELATED: Speaking to troops at war, Obama looks to homefront By the end of 2015, the number of troops would be cut in half and then replaced by a small embassy staff in 2016.

About 2,120 Americans have died and 17,674 have been wounded since the U.S. invaded Afghanistan to hunt down Osama bin Laden and al Qaida leadership after the 9/11 attacks. But the war was largely eclipsed by the conflict in Iraq, which drew more attention and more resources until the Taliban had rebounded.

By the time Obama ordered a 2009 troop surge – raising the number of U.S. troops by 30,000 to more than 100,000 -- the American public had grown war-weary after two long conflicts. The killing of bin Laden in 2011 convinced many Americans that the need to continue the war was gone.

Three years after bin Laden’s death, 48 percent of all Americans think the war itself was a mistake, according to a Gallup poll in February — a dramatic increase from 6 percent opposition in 2002. According to a Pew Research Center poll also in February, 52 percent of Americans now think the U.S. cannot achieve its goals in Afghanistan.

Such poll numbers would make it difficult for any president to sustain the war and the Obama administration, keenly aware of the falling support, has been eager to find an exit.

The administration considered pulling all troops from the country at the end of the year but military leadership had argued for a minimum of 10,000 to keep up training of Afghan security forces and maintain counter-terrorism operations.

Some in the Pentagon wanted at least 13,500 to stay after the war’s end, said Anthony Cordesman, the Arleigh A. Burke Chair in Strategy at the Center for Strategic and International Studies.

But Obama decided on a number just under the minimum advised by military leaders. The postwar plan also creates a hard timeline and places no conditions on the scheduled reductions from 9,800 — something that drew criticism from Capitol Hill and elsewhere for telegraphing information to the enemy.

“We have been rushing to get to 2014 at the expense of real Afghan readiness,” he said.

Despite the appearance of rush to the exits, the president’s plan may get what passes for a good political reception in Washington, where the administration has faced fire from both sides of the aisle.

Republicans are likely to support a continued troop presence but oppose the time line, said Larry J. Sabato, director of the University of Virginia’s Center for Politics.

Meanwhile, Democrats are likely to go along with Obama’s post-war plan for Afghanistan, though there is likely to be complaining about the president’s lack of movement on liberal causes such as closing the detention facility at Guantanamo Bay, Cuba, and reining in targeted drone killings, Sabato said.

“Basically, the administration wants to make sure Afghanistan doesn’t go to hell in a handbasket after we leave,” he said. “I think most people would see it as wise.”

On Tuesday afternoon, the political machine in Washington was in full swing following the Obama address as Republicans began hammering the president on his timeline.

“Even now, an al Qaida safe haven is emerging in northeastern Afghanistan, and I question whether the enemy will take further advantage of the announced timeline to renew its efforts to launch new operations, as we see them attempting in Iraq and Syria today,” Rep. Mike Rogers, R-Mich., chairman of the House Permanent Select Committee on Intelligence, said in a released statement.

Sens. John McCain, R-Ariz., Lindsey Graham, R-S.C., and Kelly Ayotte, R-N.H., called the announcement of a timeline a “monumental mistake and a triumph of politics over strategy.”