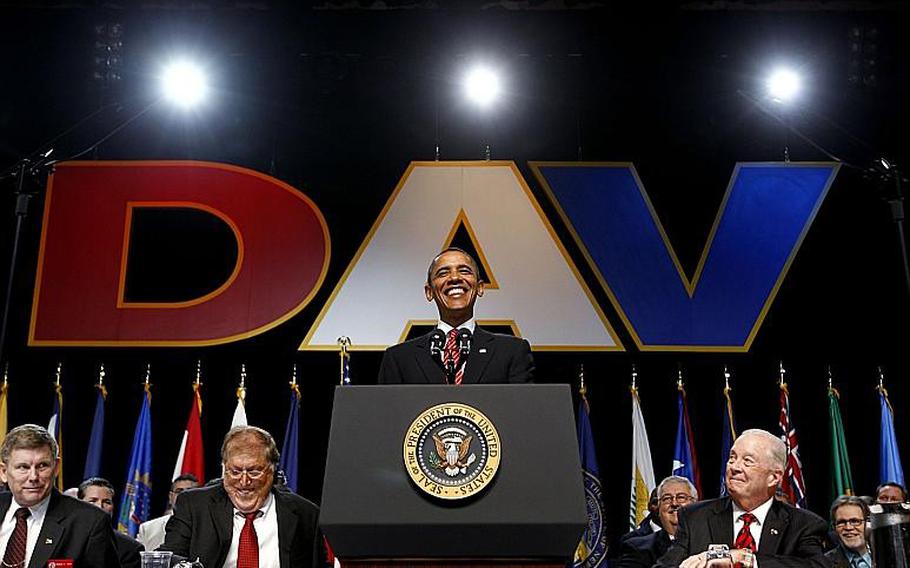 In a speech before the Disabled American Veterans convention Monday in Atlanta, Obama spoke about keeping his promises to end the war in Iraq, to finish the fight in Afghanistan, and to provide care for the wounded veterans of both conflicts.

&ldquo;Every American who has ever worn the uniform must also know this: Your country is going to take care of you when you come home,&rdquo; he said. &ldquo;Our nation&rsquo;s commitment to our veterans &mdash; to you and your families &mdash; is a sacred trust and &hellip; a moral obligation.&rdquo;

On Aug. 31, U.S. troops will formally end combat operations in Iraq, shifting &ldquo;from a military effort led by our troops to a civilian effort led by our diplomats,&rdquo; in Obama&rsquo;s words. He touted the deadline as a campaign promise kept, and noted that troop levels in country will drop to about 50,000 then from nearly 140,000 when he took office.

The drawdown mirrors a transfer of power from U.S. personnel to Iraqi security forces outlined in the November 2008 status of forces agreement negotiated between the two countries. That plan calls for all remaining U.S. troops to be out of the country by Dec. 31, 2011.

The transition so far hasn&rsquo;t been completely smooth: Iraq elections scheduled for last December were delayed for four months, and political leaders are still fighting over the formation of a new government. Iraqi security forces said July 2010 was the deadliest month for civilians there in more than two years, with 535 people killed in firefights and bombings by insurgents.

&ldquo;There are still those with bombs and bullets who will try to stop Iraq&rsquo;s progress,&rdquo; he said. &ldquo;The hard truth is we have not seen the end of American sacrifice in Iraq.&rdquo;

But he also called the move part of the end of that chapter in U.S. history.

Leslie Gelb, senior fellow at the Council on Foreign Relations, said the focus in Iraq has shifted away from what the U.S. military can achieve there to what Iraqi politicians can do to set up a stable, working government.

&ldquo;Do they want to kill each other, or do they want to make a workable political deal?&rdquo; he said. &ldquo;We&rsquo;ve can tell them what to do until we&rsquo;re blue in the face, but they have to be the ones to do it.&rdquo;

The larger postscript for the Iraq war will be the physical and psychological effects on U.S. troops, and Obama said that research into brain injuries, new post-traumatic stress disorder counseling, and large funding boosts for the Department of Veterans Affairs would help address those wounds.

He also promised advances in lifetime medical records &mdash; veterans will be able to access and print their entire file via the VA website starting this fall &mdash; and money for new hires to &ldquo;break the backlog&rdquo; of benefits claims.

&ldquo;We&rsquo;re keeping faith with our newest veterans returning from Afghanistan and Iraq,&rdquo; Obama told the crowd. &ldquo;We&rsquo;re offering more of the support and counseling they need to transition back to civilian life.&rdquo;

Veterans groups have praised the goals but also expressed frustration over the lack of results thus far.

&ldquo;They&rsquo;re really trying to get things done, but what we&rsquo;re seeing is trouble translating that down through the bureaucracy,&rdquo; said Barry Searle, Director of the American Legion&rsquo;s veterans affairs and rehabilitation commission. &ldquo;We&rsquo;re just not seeing the feedback and accountability from regional directors and lower levels.&rdquo;

Still, Searle said the American Legion is optimistic that the White House and top VA officials are headed in the right direction.