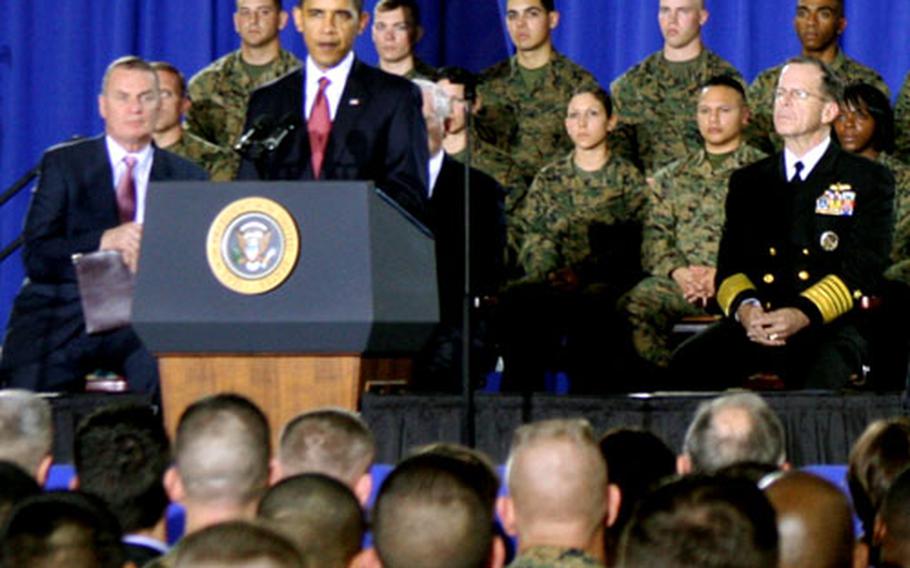 In his speech at Camp Lejeune, President Obama formally unveiled his plans to pull all U.S. combat troops out of Iraq in 18 months. (Leo Shane III / S&S) 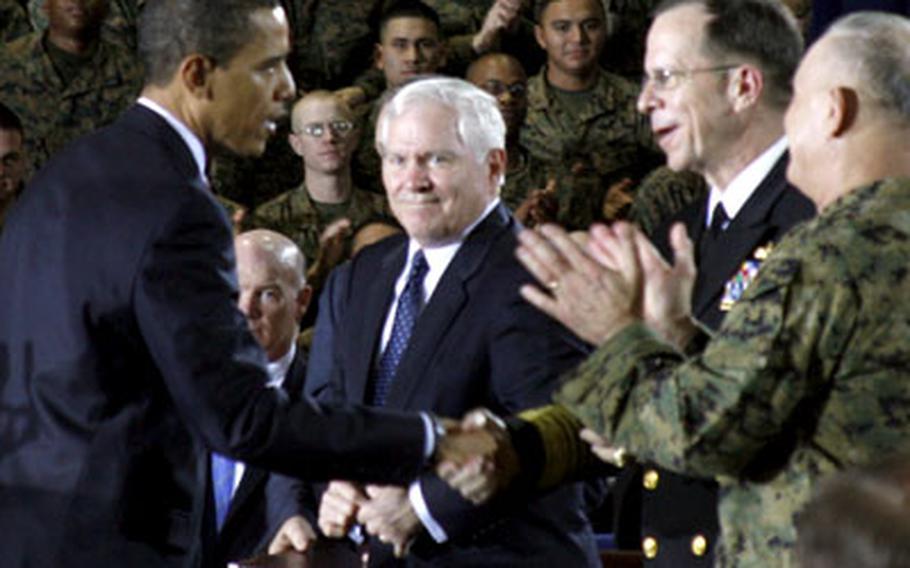 CAMP LEJEUNE, N.C. &#8212; President Barack Obama formally unveiled his plans to pull all U.S. combat troops out of Iraq in 18 months, vowing an end to America&#8217;s involvement there.

&#8220;And we will leave the Iraqi people with a hard-earned opportunity to live a better life &#8212; that is your achievement; that is the prospect that you have made possible.&#8221;

Obama&#8217;s plan would pull combat brigades out of the country steadily over the next 18 months, officially ending the combat mission in Iraq by Aug. 31, 2010. A force of between 35,000 and 50,000 U.S. troops would remain, but would serve in a training and advisory role only.

&#8220;We will proceed carefully, and I will consult closely with my military commanders on the ground and with the Iraqi government,&#8221; he said. &#8220;Our mission will change from combat to supporting the Iraqi government and its Security Forces as they take the absolute lead in securing their country.&#8221;

During his presidential campaign Obama has promised to withdraw troops from Iraq within 16 months of taking office. In a press conference following the speech Secretary of Defense Robert Gates said military leaders convinced him the extra two months is crucial for the safety of troops and security of Iraq.

&#8220;The real concern is how we get through this year and all of the elections that will take place,&#8221; he said. &#8220;If you go along that time line, this provides the maximum available force during that sensitive time. Trying to get everyone out by May (2010) really would create some logistical problems.&#8221;

After August 2010, Gates said, U.S. forces in Iraq still will embed with Iraqi combat units and conduct some counter-terrorism operations. But he reiterated that the fundamental mission will change to a support and training role.

In a meeting with Congressional leaders on Thursday night, Obama outlined his plan but said changes could be made if violence escalates again in Iraq. Rep. John McHugh, R-N.Y., ranking member on the House Armed Services Committee, called that an important commitment from the president.

&#8220;Iraq faces significant challenges in 2009, including the national parliamentary election in December,&#8221; he said in a statement. &#8220;Our commanders must have the flexibility they need in order to respond to these challenges, and President Obama assured me that there is a &#8216;plan B.&#8217;&#8221;

In a statement Friday, Sen. John McCain, R-Ariz., and Obama&#8217;s election rival, called the withdrawal plan &#8220;reasonable,&#8221; but noted it is different from his campaign promises.

&#8220;Given the gains in Iraq and the requirements to send additional troops to Afghanistan, together with the significant number of troops that will remain in Iraq and the President&#8217;s willingness to reassess based on conditions on the ground, I am cautiously optimistic that the plan as laid out by the President can lead to success,&#8221; he said.

Obama also promised a full review of U.S. policy in the Middle East and Afghanistan while troops are withdrawn from Iraq, to ensure the long-term safety of America.

Influential Shiite cleric Sheik Saleh al-Haidari says President Barack Obama&#8217;s plan does not go far enough and is demanding the reduction of Embassy staff as well, according to The Associated Press. The U.S. Embassy sits on a 104-acre site in the heavily fortified Green Zone. It is the largest U.S. diplomatic compound in the world with more than 1,000 employees.

Obama spent much of his speech Friday praising the work of U.S. troops over the last eight years, calling it &#8220;one of the most extraordinary chapters of service in the history of our nation&#8221; but also acknowledging the strain it has placed on servicemembers and their loved ones.

On Thursday, the White House unveiled their fiscal 2010 budget plans, which includes a 2.9 percent pay raise for troops next year. Mention of that raise drew the loudest applause of the day from the Marines, while plans for more day care centers, more job training for military spouses and implementation of the new GI Bill benefits drew similar cheers.

And Obama acknowledged that his Iraq plans will not please everyone.