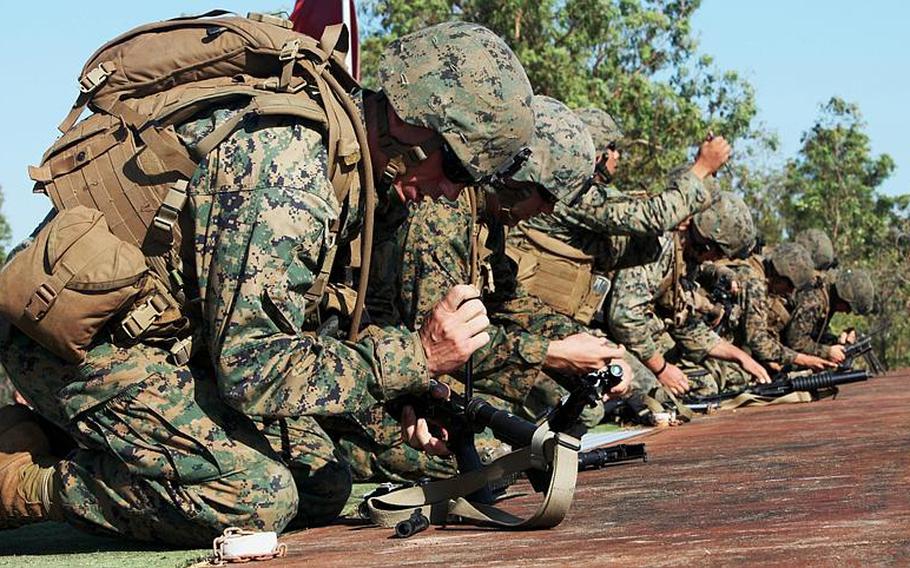 U.S. Marines with the 31st Marine Expeditionary Unit reassemble their weapons during a competition that was part of the Raider Dawn exercise in Darwin, Australia, in August. President Barack Obama is expected to announce plans to increase the U.S. military presence in Australia, during a visit to Darwin on Thursday. (Caleb Eames/U.S. Marine Corps)

YOKOTA AIR BASE, Japan &ndash; With an eye on China, President Barack Obama is expected to announce plans to boost U.S.-Australia defense ties when he visits the northern Australian city of Darwin on Thursday.

Darwin is the tropical gateway to the Northern Territory, boasting large untapped oil, gas and mineral deposits, as well as vast uninhabited tracts of land suitable for military training.

Australian media outlets reported over the weekend that the two countries would announce a plan for U.S. Marines to rotate through Australia&rsquo;s Robertson Barracks in Darwin. U.S. and Australian defense officials have not confirmed such a plan, but said closer defense cooperation is likely to include increased U.S. access to Australian training, facilities and ports, and the positioning of U.S. equipment Down Under.

Defense experts say the realignment is aimed at countering the rise of China.

In recent months, the Chinese government has exacerbated tensions in the region by renewing claims that it has jurisdiction over the South China Sea.

&ldquo;For the first time since World War II, maritime and air security and space access and control are contestable (in the Pacific),&rdquo; said Ross Babbage, a former Australian defense official and an expert on the U.S.-Australia alliance. &ldquo;Cyber and electronic security is also being contested daily by a substantial Chinese operation.&rdquo;

According to the Los Angeles Times, Adm. Robert Willard, head of the U.S. Pacific Command, told reporters on Sunday that the South China Sea is a vital hub that &ldquo;carries an immense amount of commerce.&rdquo;

A major U.S. goal is to &ldquo;maintain maritime security and peace and not see disruptions as a consequence of contested areas,&rdquo; Willard was quoted as saying.

Additionally &mdash; during his trip to the Asia-Pacific region last month &mdash; Defense Secretary Leon Panetta acknowledged China&rsquo;s military buildup, telling troops that the U.S. would strengthen its military presence in the region to deal with the challenges of China, along with North Korea.

An increased partnership with Australia could serve to allay fears by some in the region who have been questioning U.S. commitment to the Far East, according to Jan Van Tol, a retired U.S. Navy captain who is a senior fellow at the Center for Strategic and Budgetary Assessments in Washington, D.C.

&ldquo;Those concerns have been increased by post-2008 U.S. economic and budgetary problems, especially the possible implications for potentially severe defense budget cuts,&rdquo; he said. &ldquo;All this &hellip; against the backdrop of rapidly growing Chinese military power.&rdquo;

The enhanced defense ties with Australia would come at a time when the two nations, already free-trade partners, are negotiating with a dozen other Pacific nations, including Japan, to form the Trans Pacific Partnership &ndash; a free-trade zone that, according to The Australian newspaper, is intended to create a tariff-free Asia-Pacific, a region that now accounts for almost 55 percent of global GDP and 43 percent of global trade.

Australia, which has a booming economy on the back of strong sales of its natural resources to China, is one of the few U.S. allies not cutting its defense budget.

Babbage said Australia and most other countries in the region have a strong interest in seeing the U.S. military stay in the Asia-Pacific region.

&ldquo;We are looking at a more challenging environment (with the rise of China) and we need to rethink our priorities,&rdquo; he said.

Australia has a long history of fighting alongside the U.S. in conflicts to include both world wars, the Korean War, Vietnam and Iraq. It has 1,550 troops in Afghanistan, the largest force provided by any country outside NATO.Thirty-two Australian soldiers have been killed in the conflict.

Cmdr. Leslie Hull-Ryde, a Pentagon spokeswoman, said in an email last Thursday that defense talks between the two nations have focused on realigning U.S. and Australian forces to enhance both countries&rsquo; security.

&ldquo;Our respective military forces must be postured to respond in a timely and effective way to the range of contingencies that may arise in our region, including humanitarian assistance and disaster relief, and to enhance our ability to work with the armed forces of regional partners,&rdquo; she said.

Australia already hosts U.S. intelligence and surveillance facilities and there are regular port visits by the U.S. Navy and exercises between the nations. The U.S. and Australia could gain from basing U.S. command posts, listening stations, long-range unmanned aircraft, submarines and Marines in Australia, Babbage said.

&ldquo;What&rsquo;s critical is intelligence, surveillance, reconnaissance and support,&rdquo; he said.

Michael O&rsquo;Hanlon, a senior fellow at the Brookings Institution, said the U.S. could consider moving Okinawa-based Marines to Australia or home-porting ships there.

&ldquo;For Australia, a relatively modest-sized country in a challenging and dynamic environment, the United States is its only major ally that is active in the region,&rdquo; he said.