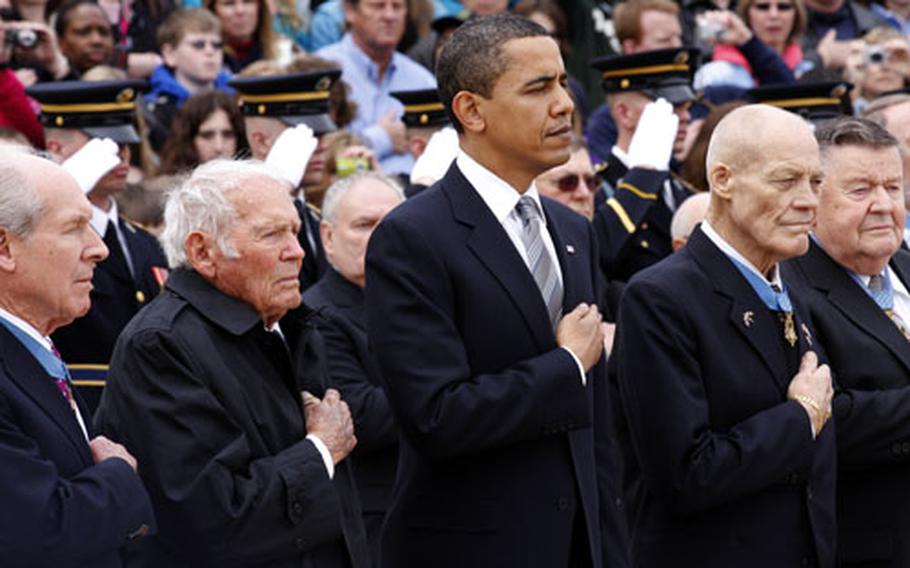 ARLINGTON, Va. &#8211; President Barack Obama made an unannounced visit to Arlington National Cemetery on Wednesday, laying a wreath at the Tomb of the Unknown Soldier to commemorate National Medal of Honor Day.

Four Medal of Honor recipients joined Obama in placing the wreath as a crowd of some 800 visitors looked on, thrilled to be in the presence of the new president.

Rebecca Medley and Rustin Albrecht were in town with a group of eighth-graders from West Side Union School District of Lancaster, Calif.

After the solemn ceremony, Obama walked a greeting line of 35 of the living 98 Medal of Honor recipients, stopping to chat with each.

Last in line was the 6-foot, 7-inch Army Lt. Gen. (Ret.) Robert Foley, awarded the Medal of Honor for his heroics in Vietnam. Foley must have said something about playing some one-on-one with the President, who laughed and replied, &#8220;You can take me inside, no doubt about it!&#8221;

After the ceremony, the 35 heroes walked down the hill to a podium where they presented &#8220;Above and Beyond Citizen Honors&#8221; to three people selected by a panel of Medal of Honor recipients:

David Bryan, a 20-year Air Force veteran from Kansas City, Mo., who pulled a motorist from a burning vehicle on I-70;Jeremy Hernandez, a youth worker who pulled 50 kids out of a school bus that had been on the I-35 bridge in Minneapolis that collapsed in 2007; andRick Rescorla, posthumously, for evacuating 2,700 people from the South Tower at the World Trade Center, against the advice of the authorities, after a plane hit the North Tower. Told more were still inside, Rescorla went back in and was never seen again. His son and daughter accepted the award.Like the Medal of Honor recipients who recognized him, Hernandez denied that he was a hero, saying that anyone would do the same.