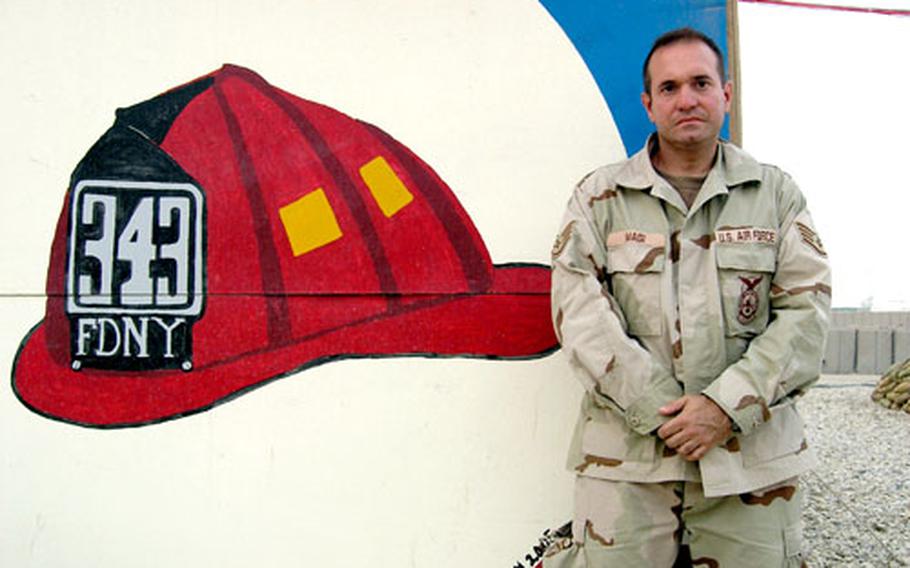 Staff Sgt. Gregg Magi poses at Ali Base, Iraq, with a mural remembering the 343 firefighters who lost their lives at Ground Zero trying to help victims of the Sept. 11, 2001, attacks. Magi is a firefighter with the 407th Expeditionary Civil Engineer Squadron and deployed from N.Y. Air National Guard’s 105th Airlift Wing. (Melissa Phillips / U.S. Air Force)

A member of the New York Air National Guard&#8217;s 105th Airlift Wing, Magi is a firefighter with the 407th Expeditionary Civil Engineer Squadron in southern Iraq. Last week, he was promoted to lieutenant in his non-military job with the New York City fire department.

Along with a few co-workers, Magi listened to the promotion ceremony via telephone at Ali Base, formerly known as Tallil Air Base. He then took his oath via telephone.

Magi, who served in the Navy for four years in the 1980s, joined the Air National Guard about a year after the Sept. 11, 2001, terrorist attacks. He was working elsewhere in the city that day and his crew didn&#8217;t arrive at the World Trade Center buildings until after they had collapsed.

He said he&#8217;s one of more than 100 members of the city&#8217;s fire department currently serving in the theater. He said he volunteered to go to Iraq and credited two supervisors, Chief Master Sgt. John Cinquemani and Master Sgt. Charles Burke, for helping to make it happen.

Magi has less than a month left to serve in Iraq. He&#8217;ll then head to an academy for six weeks before taking on his new duties in the Big Apple.